Ben & Jerry fans love the brand’s FIRST ice cream on a stick with the Peace Pop cookie dough, which will be available in the UK later this month

It’s not exactly the season for Ice Pops, but that hasn’t stopped Ben & Jerry’s fans from getting excited about the brand’s first treat that doesn’t come in a tub.

The American confectionery giant caused a sensation with the announcement of Peace Pops, its first popsicle.

Social media users, slated to be available in co-op stores across the UK from mid-January, have joined the brand on Instagram to rave about their eagerness to try the £ 2.20 worth of snack, and advocate a vegan option.

Ben & Jerry’s Peace Pops (pictured) will be available in co-op stores from mid-January. A single stick is £ 2.20 and a multipack is £ 4 – at the retailer’s discretion

Ben & Jerry’s Peace Pops are a combination of Fairtrade vanilla ice cream with chocolate chips and a peace symbol-shaped, cookie dough-inspired center that is dipped in a soft, chocolate coating.

A flurry of excited Ben & Jerry fans indicated that they will be looking for the new product in stores.

Another said, “I want to eat this now.”

Another advocated a plant-based version and wrote, “Are you going to bring a vegan version out too?” 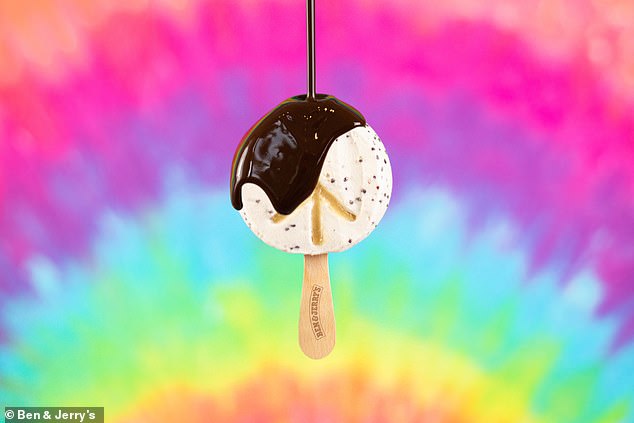 Josine Nohlmans, the brand’s flavor guru, sold for £ 2.20 each or £ 4 for a three-pack, and revealed that the new product is inspired by their story.

Peace Pops was first founded in 1988 by co-founders Ben & Jerry to promote peace initiatives in the United States.

The brand claim Peace, Love & Cookie Dough is more than just a sentence: “We are still committed to peace, justice and equality today.

“From Fairtrade-certified ingredients that advocate economic justice, to partnerships and advocacy aimed at educating and mobilizing citizens to drive systemic change around the world.”

Lose weight AND protect yourself from disease: try these brain foods to help ward off dementia