South America’s Amazon rainforest will be wiped out by climate change by 2064 due to deforestation and prolonged periods of drought, a scientist predicts in a new article.

At approximately 2.3 million square miles, the Amazon is the largest tropical forest on earth.

Not only does it reduce air pollution and regulate the world’s oxygen and carbon cycle, but it also creates its own rainfall to provide fresh water for the local population.

However, according to Robert Walker, professor of geography at the University of Florida, it is on the verge of a “turning point” as a result of man-made disturbances for which we are all responsible.

Professor Walker says the Amazon will transition from a dense, moisture-filled forest to an open savannah dominated by combustible grasses and shrubs over the next few decades.

He added that the local population’s reliance on the Amazon as a source of water means that in 44 years at most the scale of the disaster will be worse than previously thought.

2064 marks the point at which “a turning point” will be reached when extreme droughts become too frequent for the canopy to fully recover from them (which currently takes about four years).

Destruction of the local ecology in a gold mine in the Amazon. A “breakdown” in environmental policy in Brazil and other Amazonian countries has renewed public concern about the fate of the forest

A “breakdown” in environmental policy in Brazil and other Amazonian countries has renewed public concern about the fate of forests, as Professor Walker pointed out in his article published in Environment magazine.

“It is doubtful that the Amazon forest will remain resilient to changes in regional hydroclimate,” he writes.

‘The main concern is the intensification of drought-related tree mortality due to the synergies of fire, deforestation and deforestation.

“The development of the Amazon is now on a collision course, not only in the interests of conservation, but also in the well-being of the people who should benefit from it.”

Deforestation – the permanent removal of trees – is a major environmental problem that leads to the destruction of forest habitat and loss of biodiversity.

A major driver of deforestation is the deliberate inflamation of the rainforest canopy to make room for agricultural crops.

The fires in the Amazon region are known to have intensified in the past year. In August 2019, the National Institute for Space Research in Brazil reported more than 80,000 fires nationwide, a 77 percent increase from the previous year.

“A general breakdown in environmental policy in Brazil and other Amazonian countries has re-increased public concern about the fate of the forest,” says Professor Walker.

“These concerns, recently heightened by fires in the Amazon in the summer of 2019, have focused on regional climate changes that can trigger a ‘tipping point’ where the damp forest turns into a tropical savannah.” 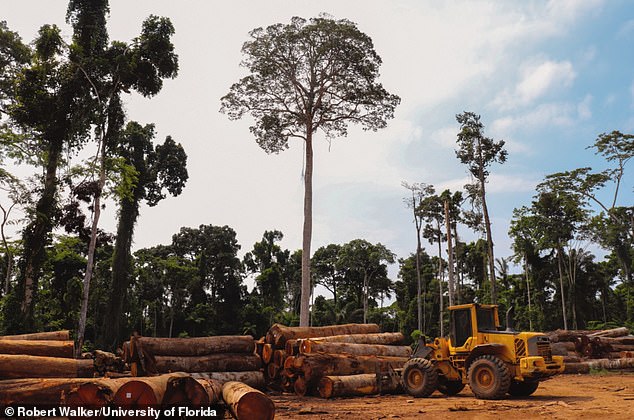 In the picture the first step towards forest destruction – deforestation. There is growing evidence that deforestation is affecting the regional climate by reducing rainfall and extending the dry season

Shortly after the turn of the millennium, effective environmental policies in Brazil reduced deforestation rates in the Amazon basin, where the rainforest is located.

But that policy “began to unravel at almost the same time it was found to be effective,” and deforestation numbers began to rise after bottoming out in 2012, says Professor Walker.

There is also increasing evidence that deforestation is affecting the regional climate by reducing rainfall and extending the dry season.

The researcher also points to “waves of immigrants” that initiated a process of agricultural development in the late 1970s that has consumed around 20 percent of Brazil’s original forest to date.

However, poverty and poor use of government funds ultimately lead to a large part of deforestation, says Professor Walker.

“People there don’t worry as much about biodiversity and the environment when they have to worry about their next meal,” he told United Press International. 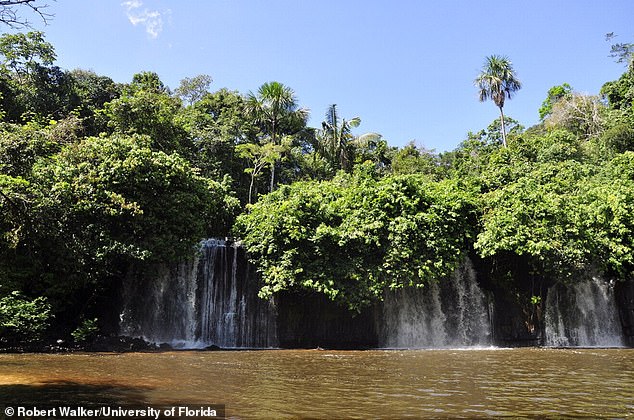 A single period of drought in the Amazon rainforest can reduce the forest’s carbon dioxide uptake for years after the rain has returned. Pictured a waterfall in the state of Amazonas

Meanwhile, more frequent droughts caused by global warming are killing the most vulnerable tree species in the Amazon caused by water and thermal stress.

In addition, drought encompasses the ability of surviving trees to do their job as the world’s lungs.

Scientists estimate that the Amazon absorbs up to a tenth of fossil fuel emissions from humans during photosynthesis.

A single period of drought in the Amazon rainforest can reduce the forest’s carbon dioxide uptake for years after the rain has returned.

Dr. Adriane Muelbert, a University of Leeds expert who was not involved in Professor Walker’s research, previously said the ecosystem’s response is lagging behind the pace of climate change. 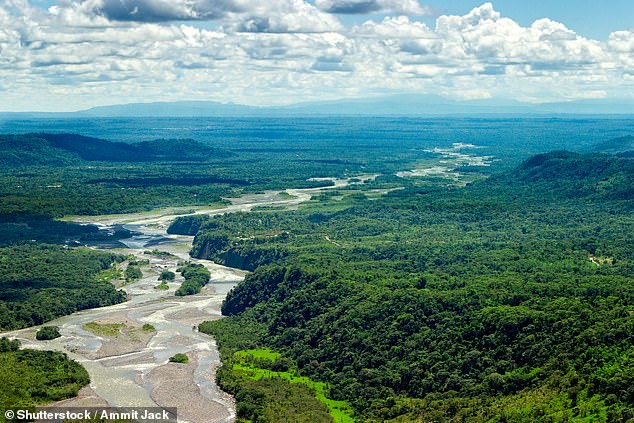 Previous research has shown that tree mortality rates increase over the long term and lag behind the increase in tree growth in the Amazon forest (Figure).

“Droughts that have struck the Amazon basin in recent decades have had serious consequences for forest composition, with higher mortality rates in tree species most vulnerable to drought and inadequate compensatory growth in species better prepared for drier conditions “, she said .

If the dry season in the Amazon continues to lengthen, as it has for decades, the 2005 drought will become the region’s “new normal” before the end of the century, Professor Walker believes.

The return period of the severe drought gave the canopies ample time to recover from the fire, but the prolonged dry season has “begun to take this breathing space away”.

“A forest cannot survive if its canopy takes more than four years to recover from an annual event,” he says.

In fact, the southern Amazon can expect to hit a tipping point just before 2064, when the dry season is currently lengthening.

“By then, the severe drought return cycle will have sunk below the time it takes for the canopy to recover. By that time, the fire-stripped woodland will be permanently plagued by combustible grasses and shrubs.” 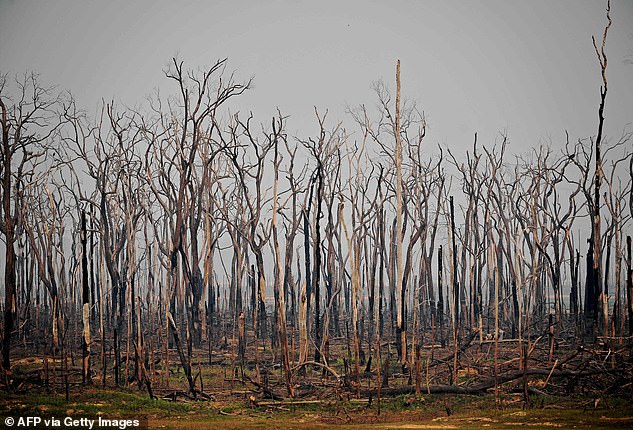 Burned trees in the Amazon rainforest, near Abuna, Rondonia state, Brazil in August 2019 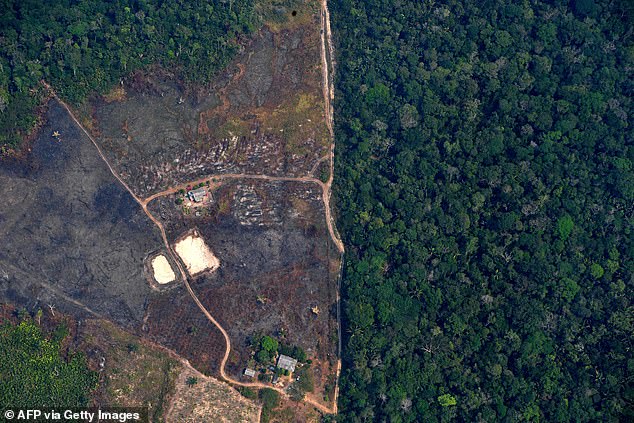 In the picture, deforestation in a fire-affected region of the Amazon rainforest, as seen in August 2019

Elsewhere in the work, Professor Walker refers to the Anthropocene – a proposed geological epoch in which humans permanently changed the planet.

‘The Amazonian environment has proven to be resilient to long swings in climate change that can be tracked over millions of years from geological records.

“Even in times much warmer than today, the forest held its ground, with some encroachment on the tropical savannah at the edge of the basin to the south and east, now known as the Arc of Deforestation.”

“Will the Anthropocene act with greater force and trigger a turning point crossing on a basin scale?” He asks.

“Whatever the answer, the evidence is indisputable that the climate in Amazonia is now changing.”

The British obsession with wood, leather and beef has had a strong impact on the Amazon rainforest

Britain is obsessed with wood, leather and beef from Brazil, according to wildlife charities who claim it has “a powerful impact” on forest fires in the rainforest.

Brazil, home to two-thirds of the Amazon rainforest, is one of the riskiest countries that Britain imports key agricultural commodities from, according to WWF and RSPB.

In a new report, WWF says fires are being set on purpose to make way for farming to meet growing demand from countries like the UK.

The latest figures suggest that 2,248 outbreaks of fires were recorded in the Amazon biome for the month of June – the highest number in 13 years.

According to a new report, Brazil accounts for 13.9 percent of the UK’s overseas land area, which is roughly 800,000 hectares, or five times the area of ​​Greater London.