James Niehues: The man who hand-painted the ski slopes for over 200 ski areas

Computer zero, man with pencil and brush, one.

Meet James Niehues, an artist who has hand-painted over 200 ski resort maps in North America, South America, New Zealand, and Australia, though map makers compete with computer-generated imagery. His amazing artistry has seen millions of skiers in some of the world’s most famous ski resorts – from Aspen to Whistler and from Vail to Jackson Hole and Thredbo – but until recently few had ever heard of him.

Now, however, the story of his incredible career is told in a rich coffee table book entitled The Man Behind the Cards – Legendary Ski Artist James Niehues, published by Open Road Ski Company.

This is a map of Breckenridge, Colorado, created by Niehues in 2016 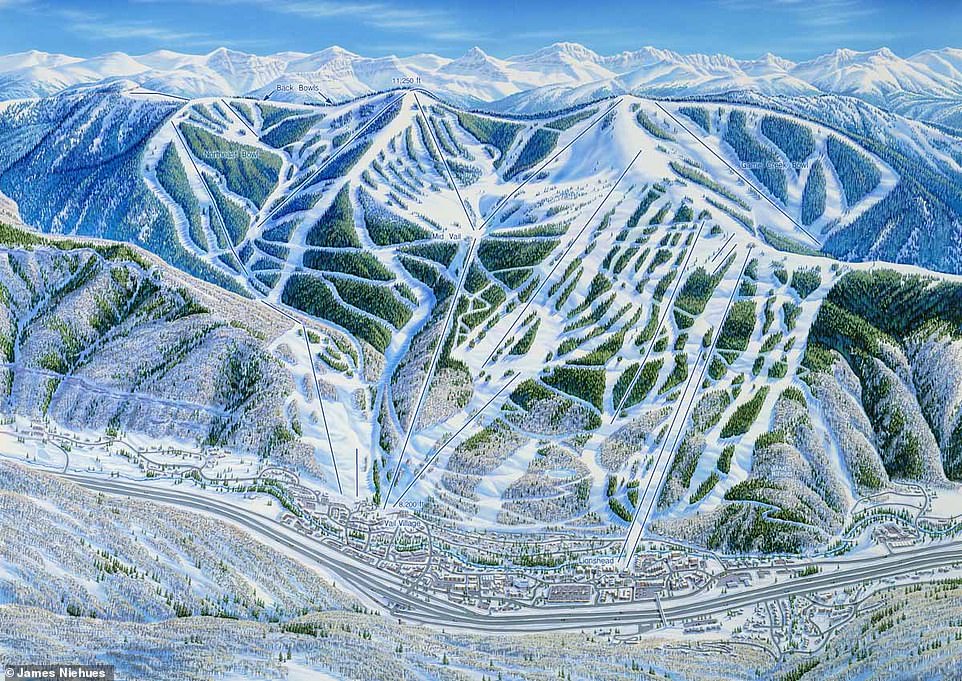 Niehues’ work has defined the look of ski resorts across continents, the details are so precise that people even use his maps to navigate unmarked and unnamed mountain areas. This is Niehues’ map of Vail on the front, which he made in 1988

The volume describes Niehues’ incredible journey, artistic process, and a lifetime of illustrations created using techniques refined in the industry over more than 30 years.

The scale of his career is breathtaking, his history unparalleled.

His work has defined the look of ski resorts across continents, the details are so precise that people even use his maps to navigate unmarked and unnamed mountain areas.

And despite the digital age, he still works with a process for each card that can take up to three months. He paints each tree by hand and carefully shadows each slope.

The journalist and skier Jason Blevins sums up the meaning of Niehues perfectly in the introduction to the book: “Niehues has become the shepherd of skiers and guides us through snow-covered landscapes, which he creates with an authenticity that still eludes computer skills.” 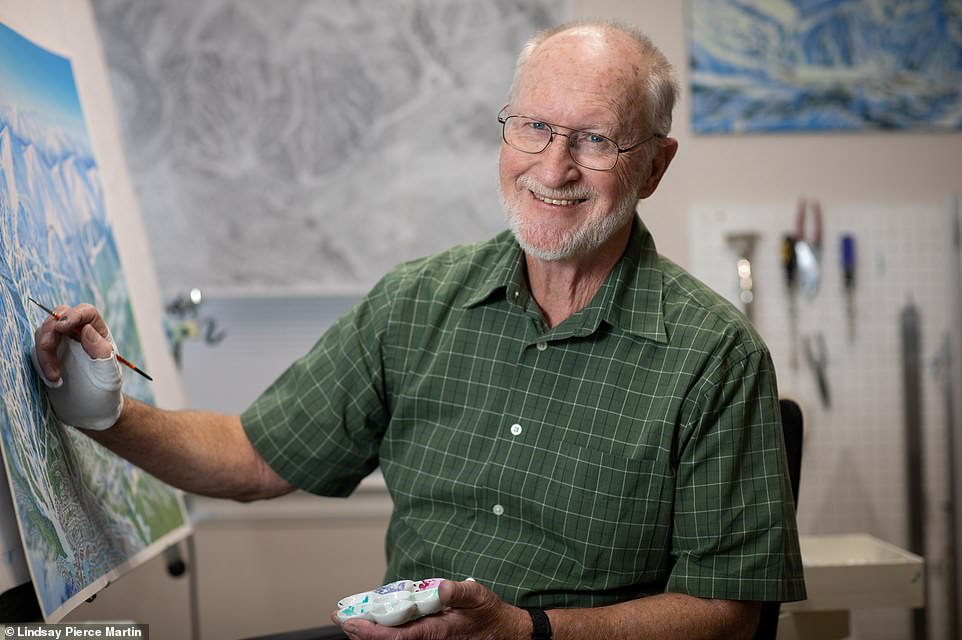 Niehues above has hand-drawn over 200 ski resort maps in North America, South America, New Zealand and Australia. Its only European card is for the Kopaonik resort in Serbia 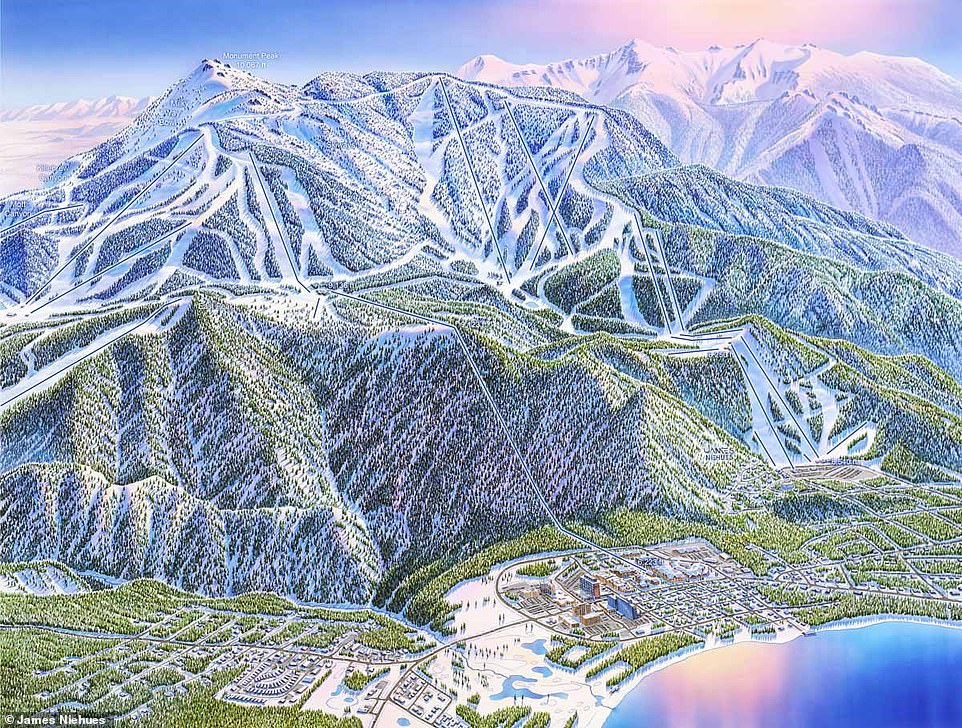 Niehues continues to work with a procedure for each card that can take up to three months. He paints each tree by hand, carefully shading each slope. This map shows Heavenly, California

Adam White, Director of Communications Ski Vermont, said, “With Jim’s card in your pocket, you’ll feel safe. You trust him. He is trusted by millions of people who ski and snowboard. Its magical. I’ve spent more time with Jim than anyone else in my life. ‘

And Chris Davenport, two-time world champion in professional skiing, is also a fan and describes the Niehues maps as “important, even vital, for everyone whose heart and soul revolves around skiing”.

Niehues’ first published ski resort map was an example of a winter park expansion in Colorado that he carried out in collaboration with ski map artist Bill Brown.

Brown submitted the card to the resort with Niehues’ signature and then used it to solicit other resorts for independent commissions. 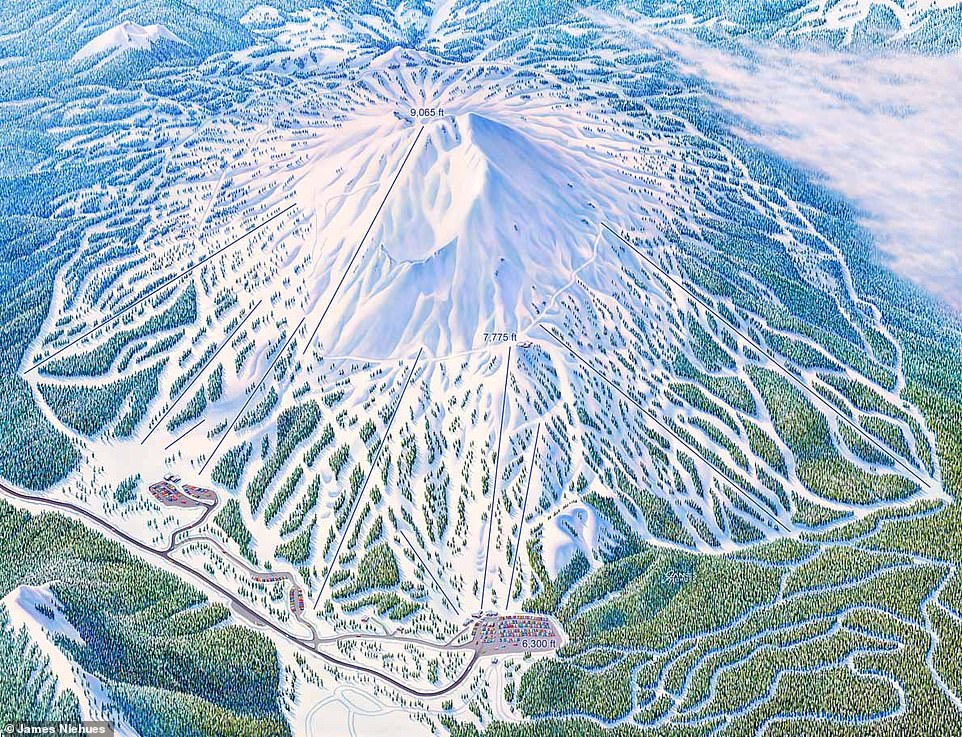 Adam White, Director of Communications Ski Vermont, said, “With Jim’s card in your pocket, you’ll feel safe. You trust him. He is trusted by millions of people who ski and snowboard. Its magical. I’ve spent more time with Jim than anyone else in my life. ‘This map shows the Mt.Bachelor in Oregon that Niehues created in 2019

The first of these was the illustration of the California resorts Boreal and Soda Spring, whose contract was signed in March 1987.

Both resorts still use his cards to this day, the book says.

“I lost a lot of jobs to computers,” says Niehues. “If I made 15 cards a year and lost three, that was a big part of my income.”

From the book, however, it emerges that around 2005, through the grapevine, Niehues heard that many resorts lacked his craftsmanship, his “color palette, his shading and his ability to transform a multi-faceted mountain into an easily understandable picture on paper”.

“Some of them came back,” says Niehues. “They wanted a look that you can’t get on a computer.” 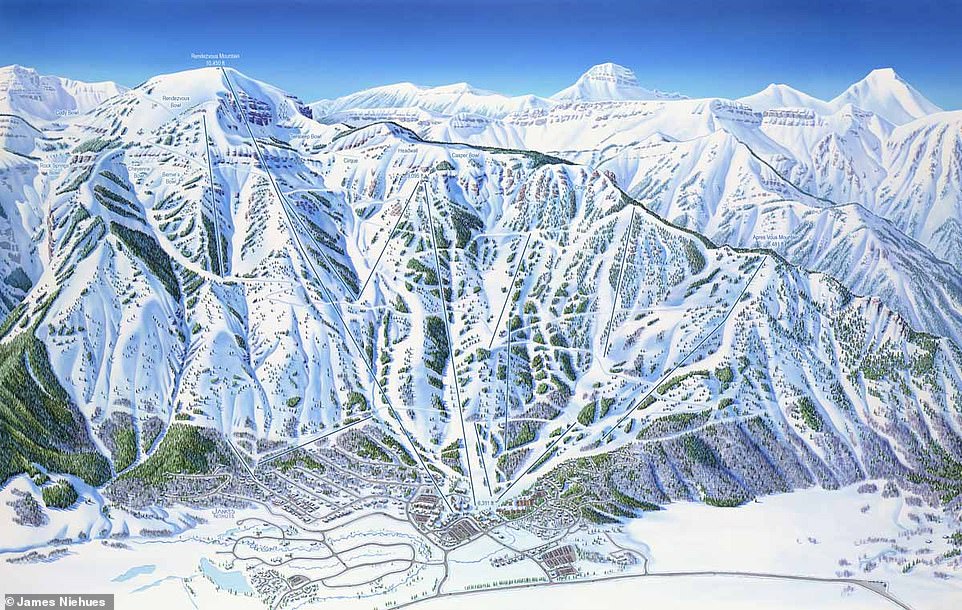 This guide shows the legendary Jackson Hole resort in Wyoming, which Niehues first mapped in 1993 and redesigned in 2015. In the book he describes his aerial reconnaissance flight for the project: “We used a Cessna. It was a huge area to cover and I kept asking the pilot to climb higher. After 30 minutes over 14,000 feet, I became dizzy. I’ve learned to ask for an oxygen cylinder at this altitude for future flights. ‘

Niehues’ process of creating his maps begins with taking hundreds of photos of the resort from a light aircraft.

He also spends some time on the slopes to make sure he understands the skier’s perspective. “My job is to convey the experience that you can expect from a particular run,” says Niehues.

The book shows that Niehues uses the aerial photographs to create a perspective view of the mountain by manipulating three-dimensional aspects and the terrain to match his two-dimensional maps. 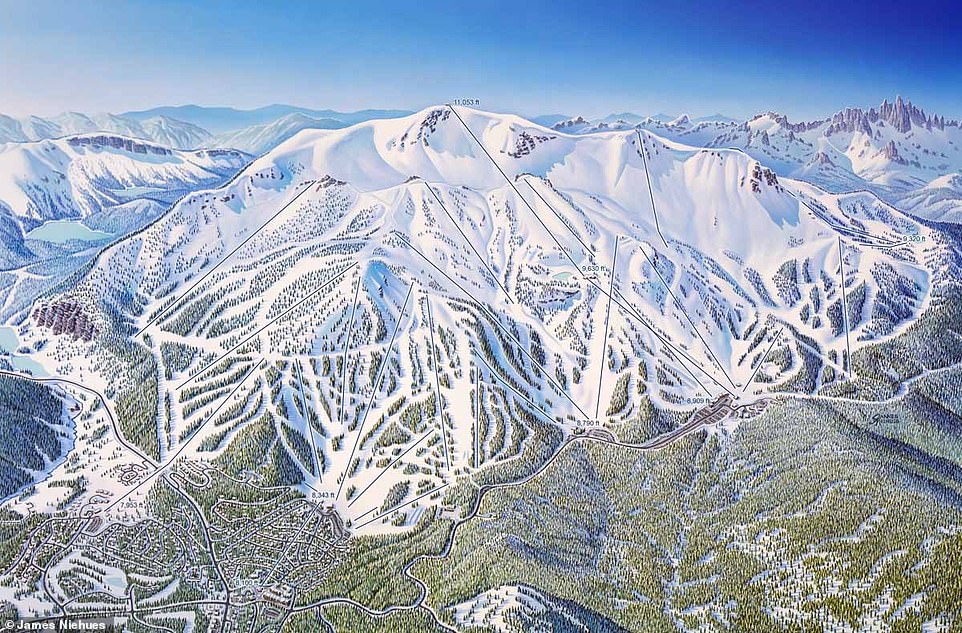 To make his maps, Niehues spends some time on the slopes to make sure he understands the skier’s perspective. This is a 2008 map of Mammoth, California 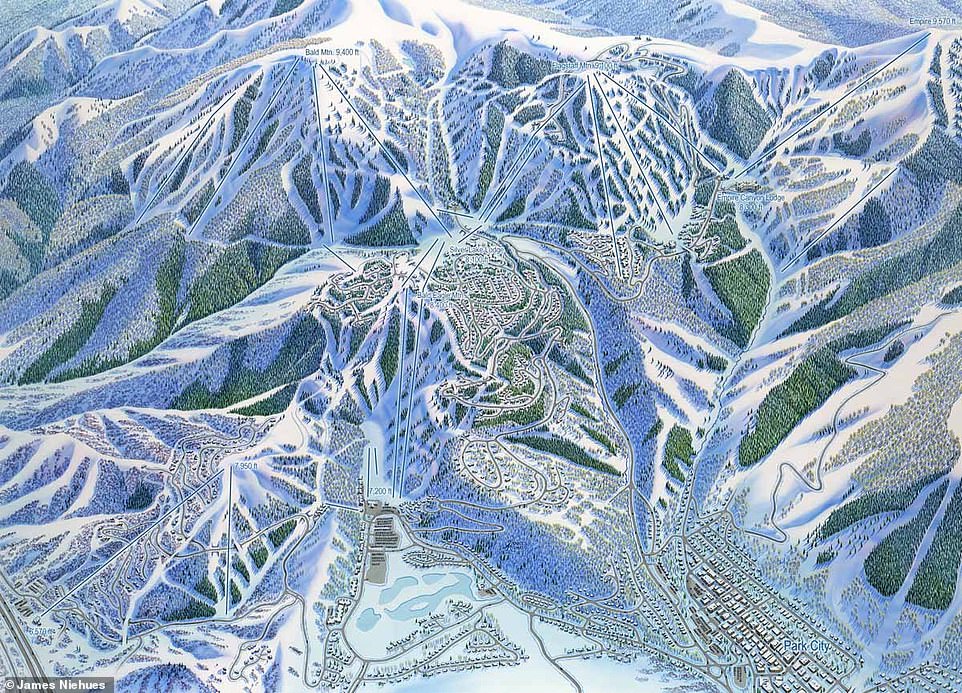 With the help of aerial photographs, Niehues creates a “forced perspective” of the mountain “by manipulating three-dimensional aspects and the terrain so that they fit his two-dimensional maps”. This is a 2014 map of Deer Valley, Utah

Next, he consults the resort to make sure he is aware of the features that should be highlighted in the design.

He then spends three or four days sketching the resort with a pencil.

This rendering is then returned for review and review by one of the resort’s most experienced skiers.

At this stage, according to the book, Niehues must incorporate “Marketing Tilt” into his art. For example, some resorts contradict the background details of the mountains, especially if the peaks belong to a different resort.

But Niehues insists on her inclusion, emphasizing that “the background tells a great story … the ridges behind it indicate what terrain you are in and what you will see as a skier”.

As soon as the pencil sketch is approved, Niehues photographs it, projects it onto a large board and traces every detail.

The most time consuming phase is the next – painting. This can take three weeks and involves a mixture of airbrushing and painting. Wispy clouds are inserted, snow-free parking spaces are always added, snow is carefully shaded to show slopes and carefully placed trees.

Niehues, who is from Loma, Colorado, told MailOnline Travel that painting the trees sometimes feels overwhelming – he has painted millions now – but he says, “At some point the last tree will be finished and the effort is the time worth it – it’s worth it because the result will be impressive and very believable, which means that the picture will have a long and effective life. “ 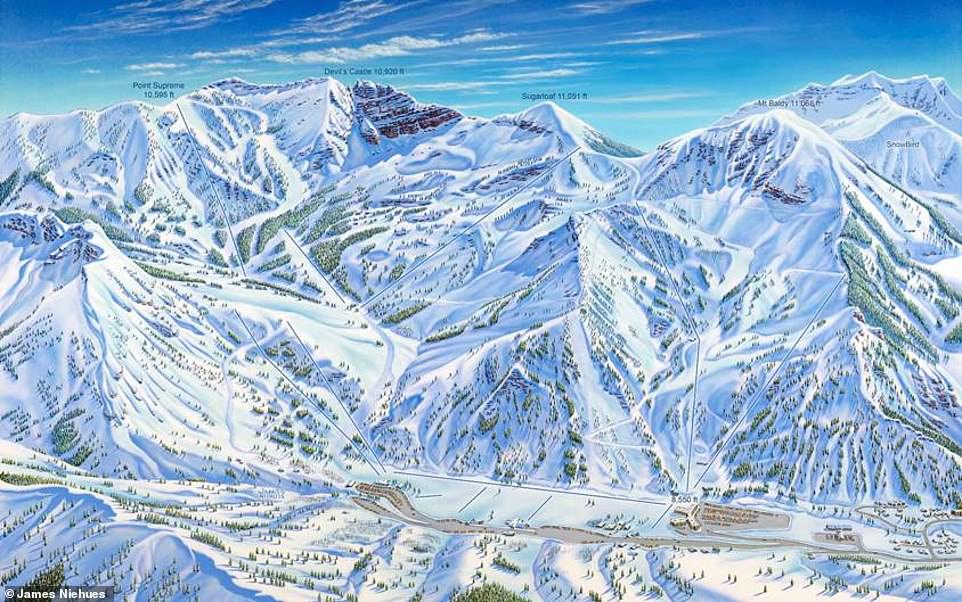 Niehues told MailOnline Travel that painting the trees sometimes feels overwhelming – he’s painted millions now – but he says that “at some point the last tree will be finished and it will be well worth the effort”. This is Alta, Utah 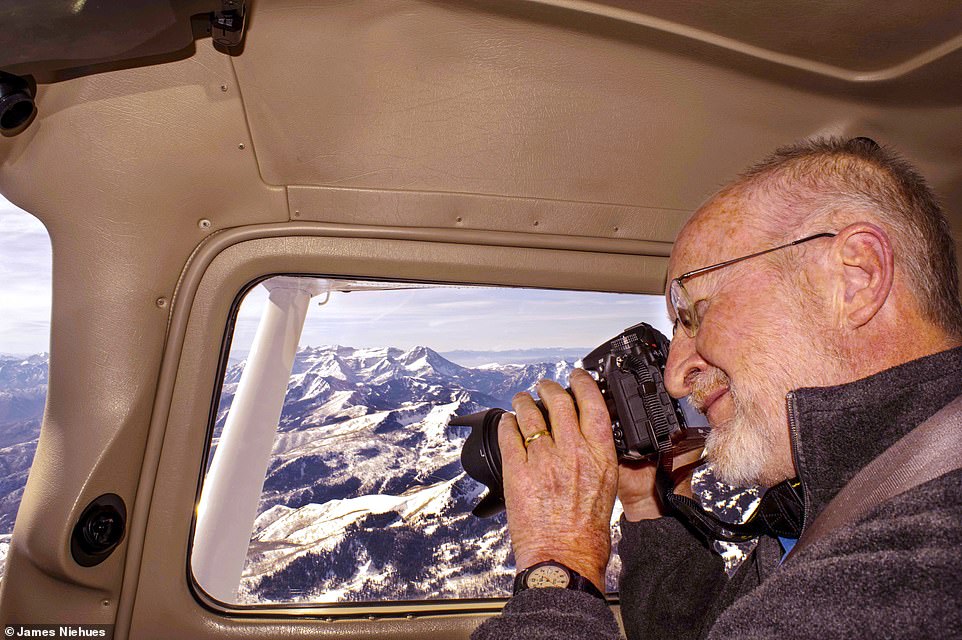 Niehues is pictured here and photographed in Park City, Utah, from a Cessna 182

He revealed how he paints them.

He said, “First, the shadows that they cast on the snow are painted in front of the trees. Not only on the edge of the path, but also in clearings between the trees. When I paint a deciduous forest, the canopy is so thin that all the shadows of the trunks are visible through the thin canopy, which I will illustrate as many long individual lines. Second, the base color for the conifers is painted with a short continuous up and down stroke that creates a texture of triangular shapes. I paint with a water soluble medium so the third step is to rewet this texture so the paint can flow just a little and the lighter tint appears.

Fourth, the highlights of the white snow are added. Fifth, the shadows are painted. These last two stages form the shape of the slopes.

“You can understand why I get very, very excited when I get a project from New Zealand. Take a break from the trees! ‘

According to the book, Niehues has to incorporate “Marketing Tilt” into his art. For example, some resorts contradict the background details of the mountains, especially if the peaks belong to a different resort. This map is from Big Sky in Montana 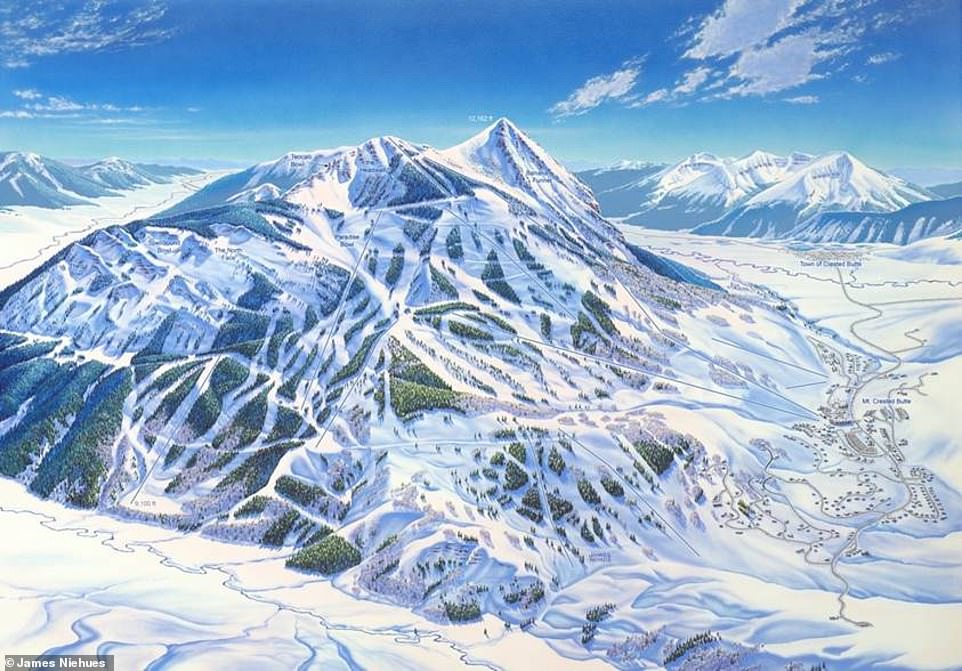 Niehues says: “The background tells a great story … the ridges behind it show what terrain you are in and what you will see as a skier.” This is Crested Butte, Colorado as shown in a 1991 map of Niehues

When asked if he had a favorite menu for the resort, 74-year-old Niehues wouldn’t commit.

He said, “After painting 200 resorts around the world, I have a lot of” favorites “for a variety of reasons. You have to understand that I am a landscape artist first and then a skier. My passion is landscapes and most ski resorts are in a diverse and dynamic environment. I have been blessed to have the opportunity to visit places I would only have dreamed of if it hadn’t been for the need for the job at hand.

In 1997 I made my second trip to Australia to map Perisher. 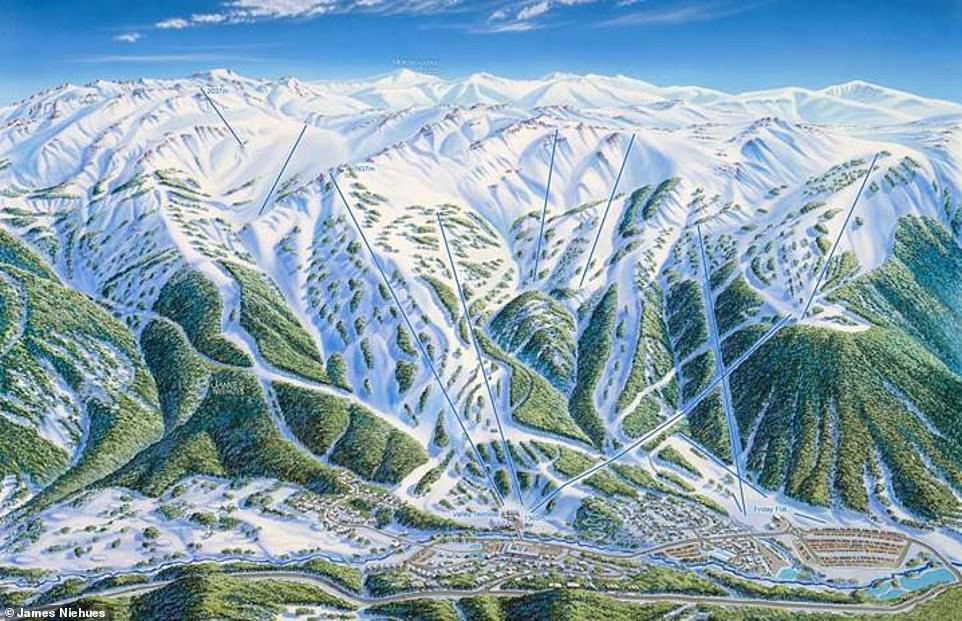 Niehues has mapped several resorts in Australia, including Thredbo (above). This map was created in 1994 – and the resort continues to use the work of Niehues to this day 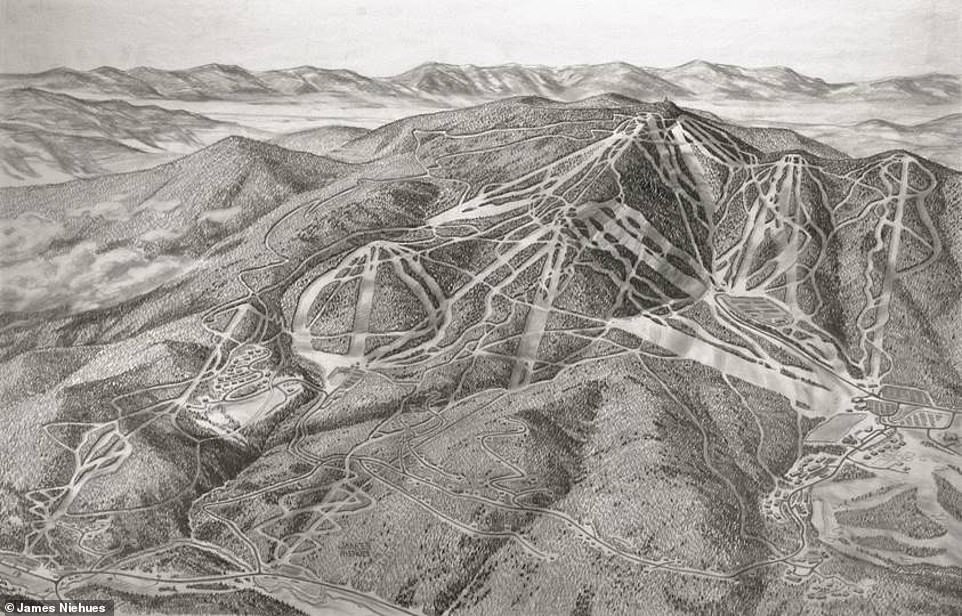 This 1990 sketch by Niehues shows Vermont’s Killington ski area. It remains one of the artist’s favorite mountains 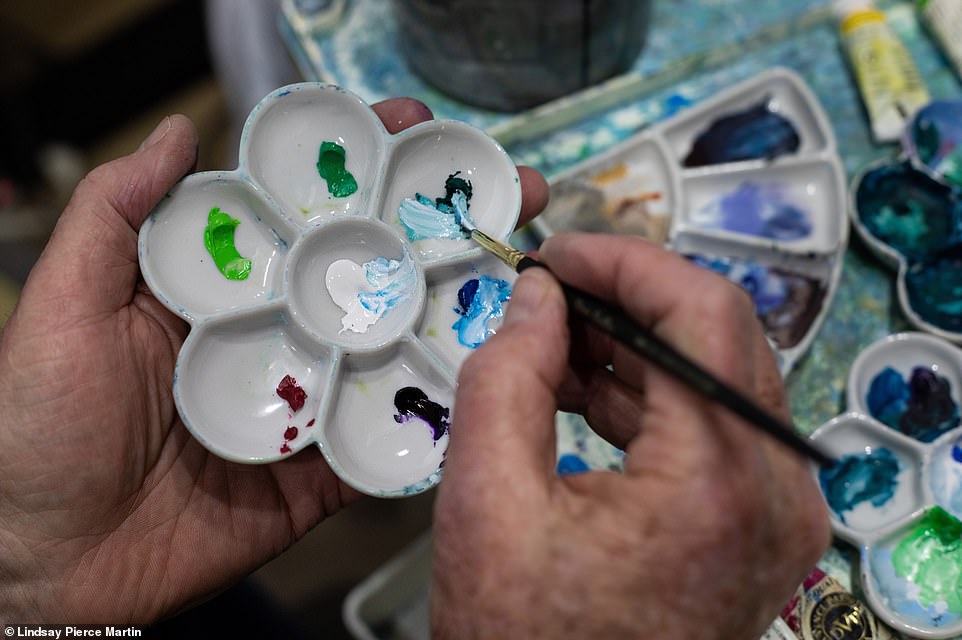 The process of painting each card takes about three weeks, as the book shows. This picture shows Niehues mixing colors

‘The slopes of Perisher are made up of several smaller resorts that were linked when they were merged. All of the peaks are approximately 500 feet above the base. From my point of view, my job was to emphasize the modest height as much as possible. I opted for an early morning scene to highlight the shadows and sculpt their peaks. It remains one of my favorites.

‘Killington, a Vermont resort, was first canceled in 1990, one of my first resorts in the east. It was later painted in two views, but the original 1990 version was reintroduced as a walking map and remains one of my favorites.

“I recently completed Mad River Glen, Vermont, working from a photo I took decades ago without knowing which resort I flew over while on duty for Sugarbush, Vermont.

“I really have a dream job combining all the things I love to do … traveling, skiing – learned at work – aerial photography, sketching and painting.”

He really is the Michelangelo of the mountains. 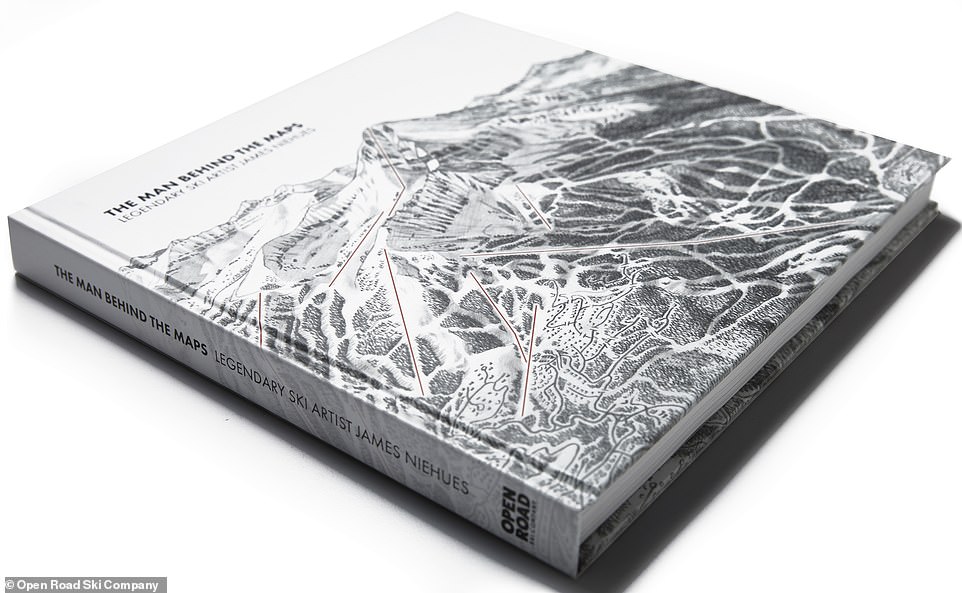 The man behind the cards: Legendary ski artist James Niehues, published by the Open Road Ski Company, can be ordered through openroadski.com and costs 90 USD (65 GBP). 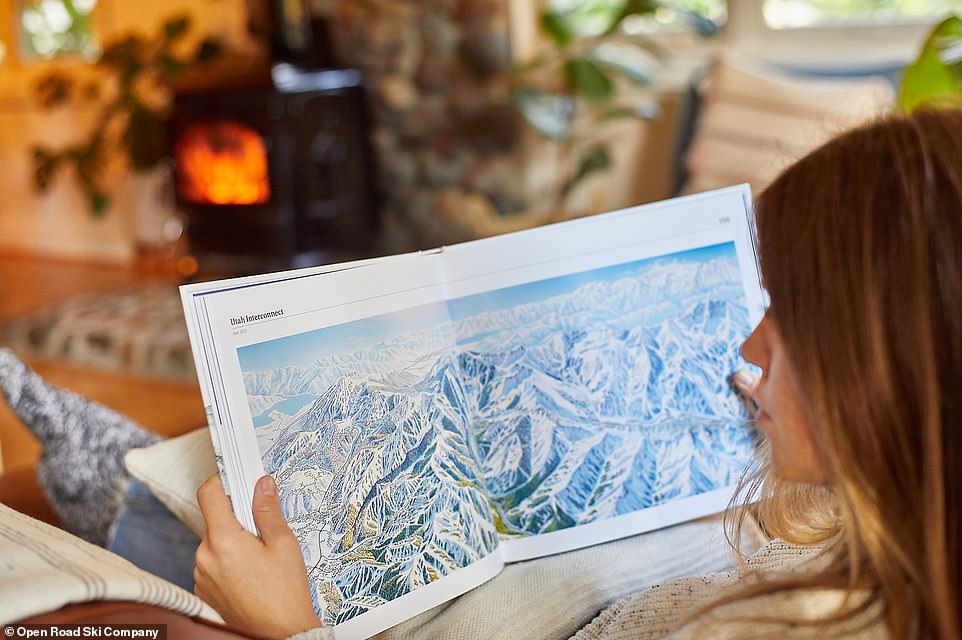