He has a lofty career – and a lofty hobby.

Nick de Jonge flies Boeing 737s for KLM. In his spare time, he sends up his drone to take landscape photos with results so breathtaking that he looked around 20,000 Instagram followers.

However, the 34-year-old first officer from Haarlem, the Netherlands, announced that his pilot training was not helpful in flying his drone, but instead made him aware of airspace restrictions and use.

He told MailOnline Travel: “Flying a drone takes a lot of practice. You need to learn how to fly and operate the drone first and feel safe flying around. Make sure you know the drone rules for the area you are flying in. “

Nick has taken photos all over the world, but here we show some of his incredible shots of his homeland, taken from the air and the ground.

Scroll down and you will spot a theme. As Nick said, “Driving through the countryside is always very enjoyable. Add some morning mist and windmills and I’m a happy man! “

This ethereal image shows the 18th century Overwaard windmills in the village of Kinderdijk, which has been a UNESCO World Heritage Site since 1997 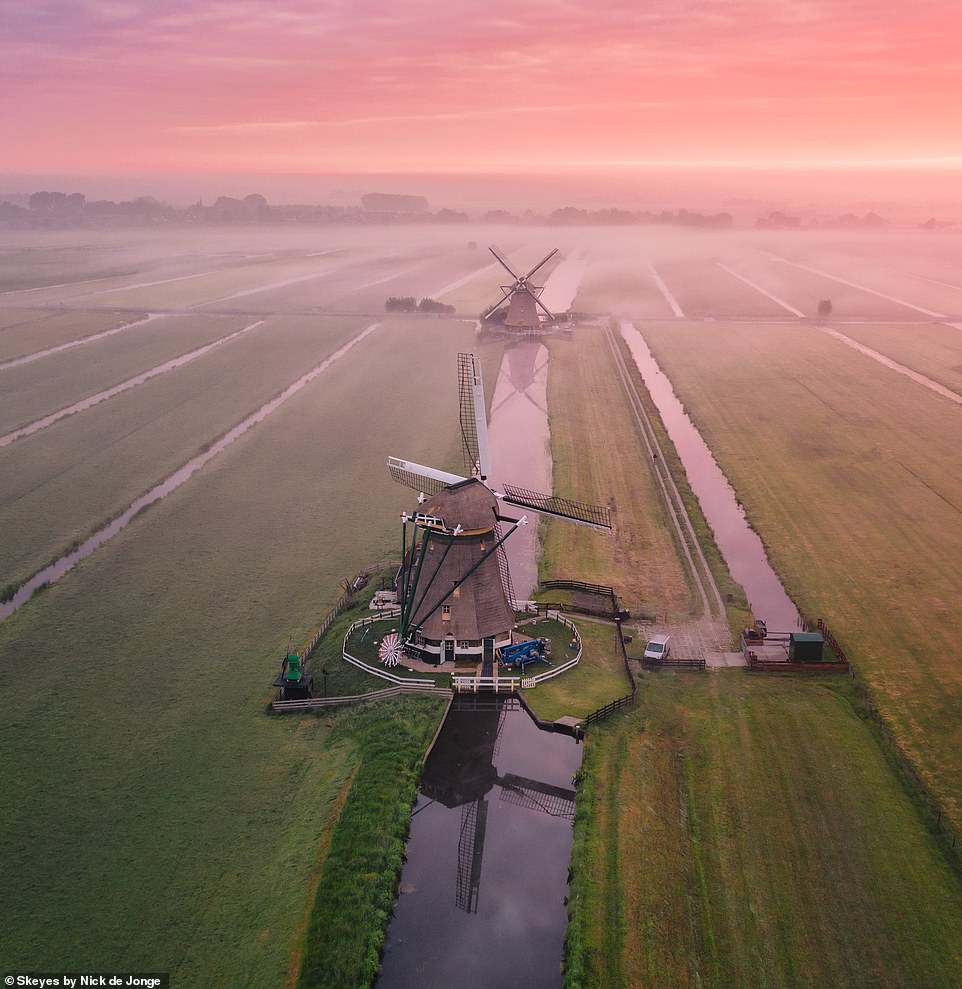 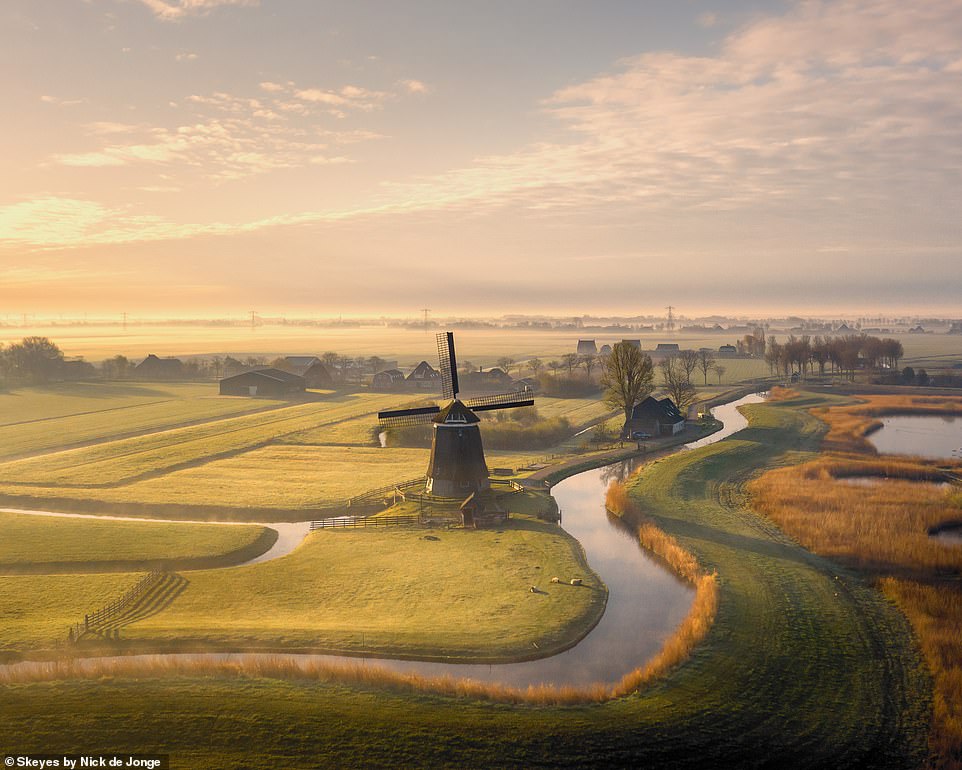 A fascinating picture of a green and pleasant landscape in the province of North Holland. Nick describes this picture as one of his favorites and has it on his calendar for 2021 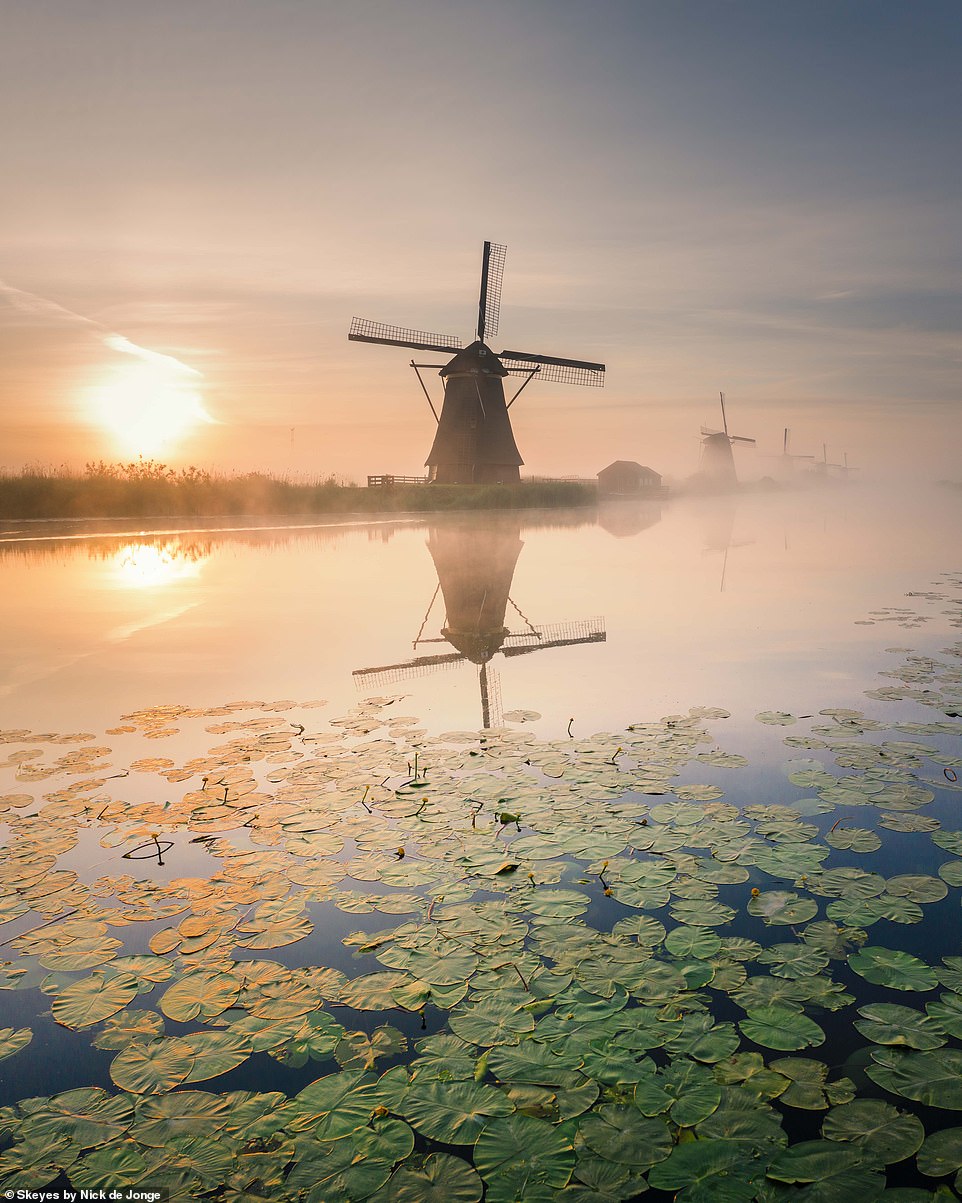 Another magical shot of the Overwaard windmills in Kinderdijk. These windmills draw water from the lower basin in the village to the upper basin 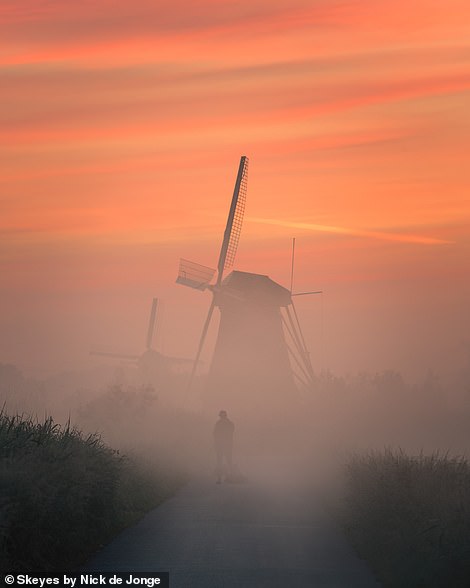 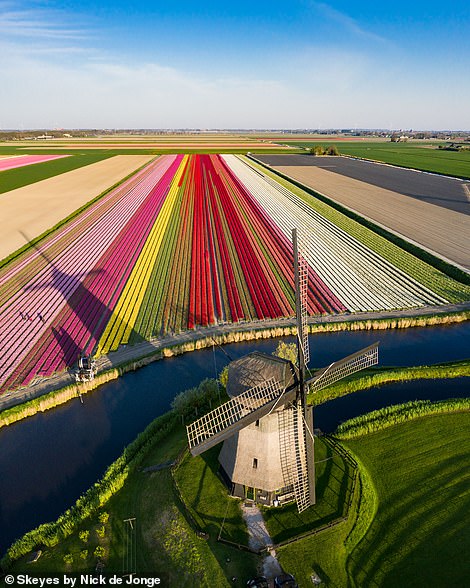 The breathtaking picture on the left shows a path that leads to mist-shrouded windmills in Kinderdijk. One of Nick’s Instagram followers, “Ryanleebanks”, was moved to describe the picture as “unreal”. On the right you can see a wonderful picture that was taken in North Holland 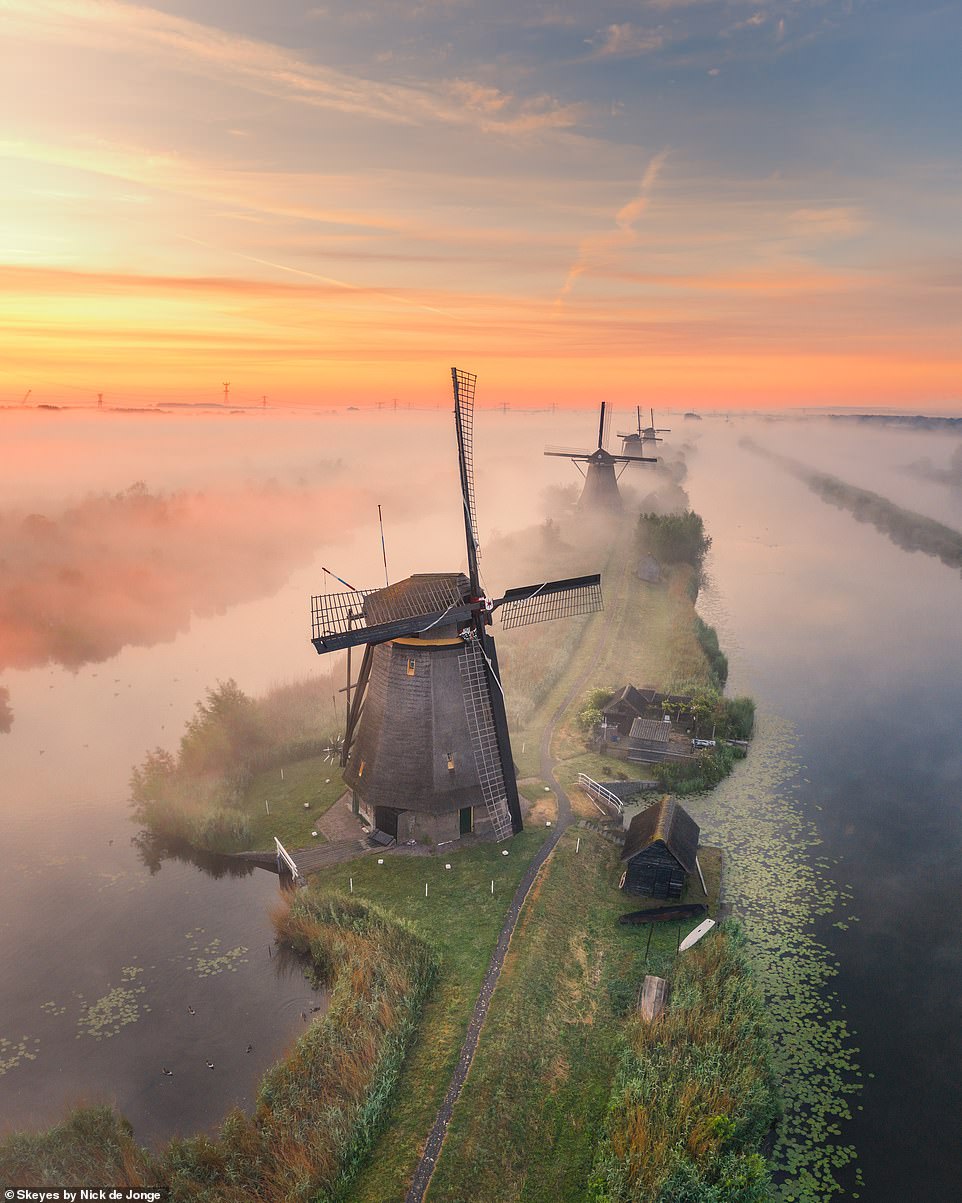 Nineteen of the approximately 1,200 windmills in the Netherlands are located in Kinderdijk (see picture here). The village is about 30 minutes by waterbus from Rotterdam 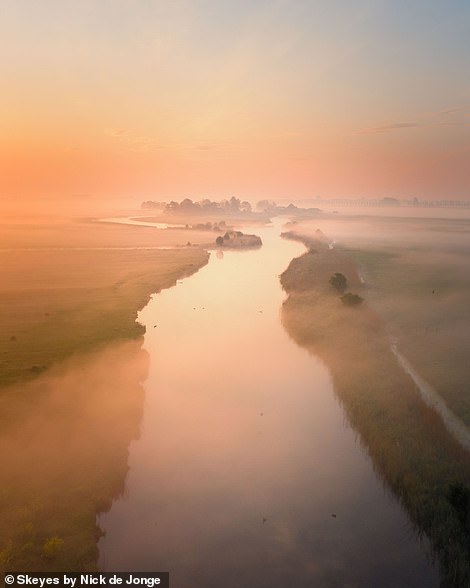 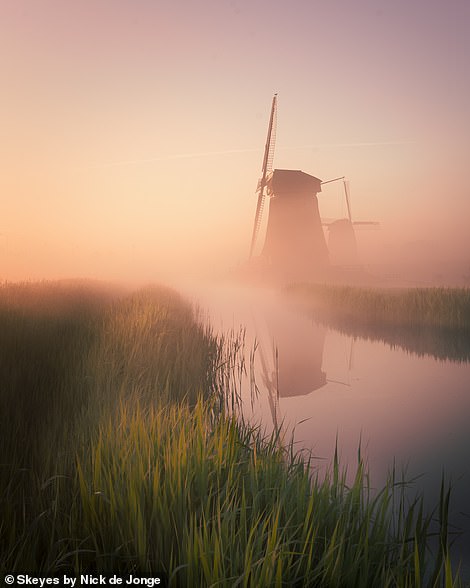 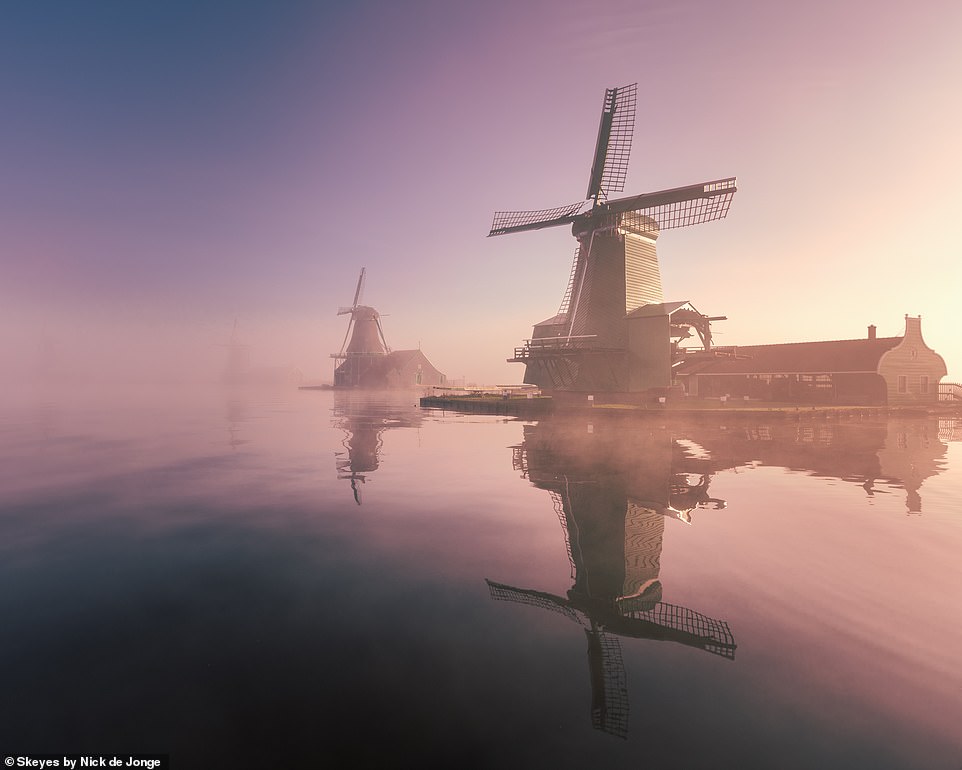 Clouds of mist float over the water and around windmills in Zaanse Schans, which became a “living museum” after various historic buildings were moved there from the Netherlands in the 1960s and 70s and renovated. Zaanse Schans is one of the most popular tourist attractions in the country 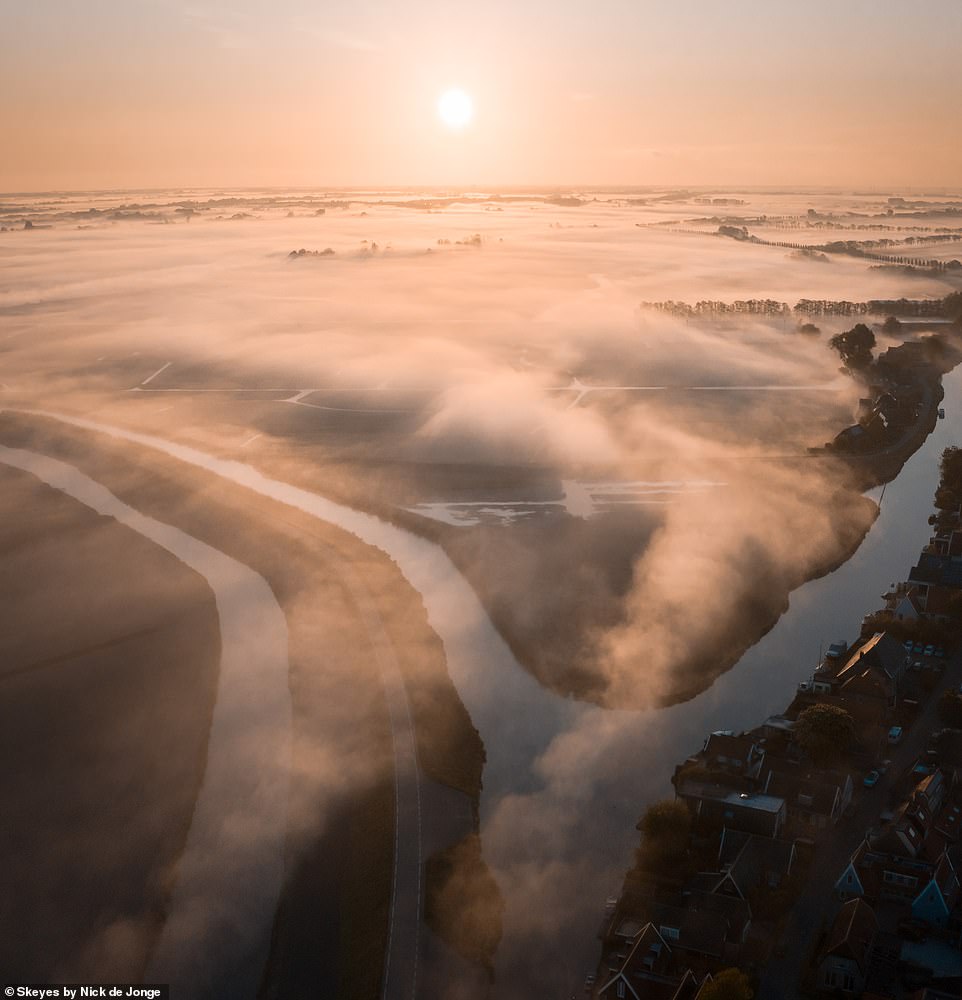 Rolling fog suffocates the village of Grootschermer in an aerial photo that one of Nick’s Instagram followers describes as “absolutely breathtaking”. 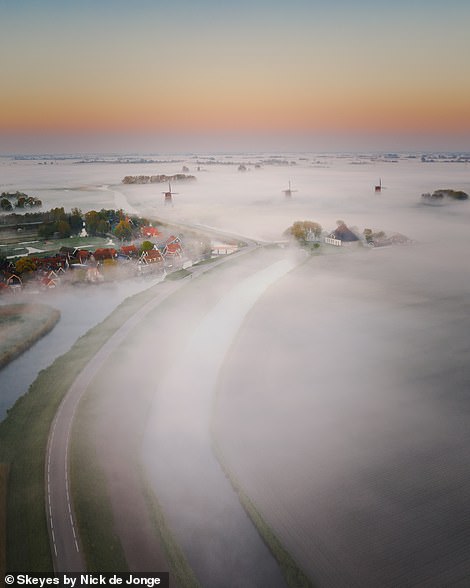 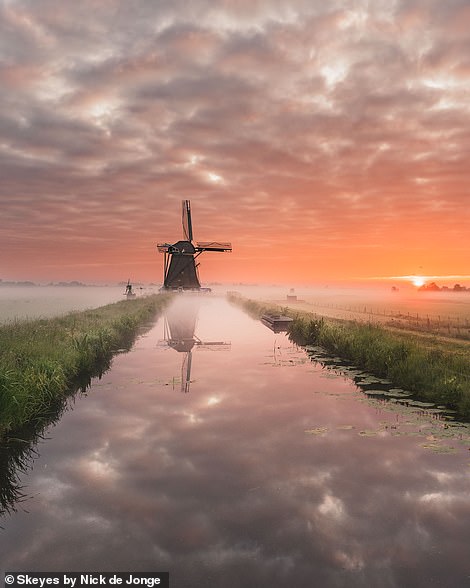 In Schermerhorn (left) windmills protrude from the fog. Nick’s caption on Instagram for the picture on the right reads: “Wonderful reflections in the mills of Aarlanderveen. These mills are actually still in operation. They slowly pump excess water out of the polder. The land (polder) from which the water is pumped is 5.4 m below sea level. “ 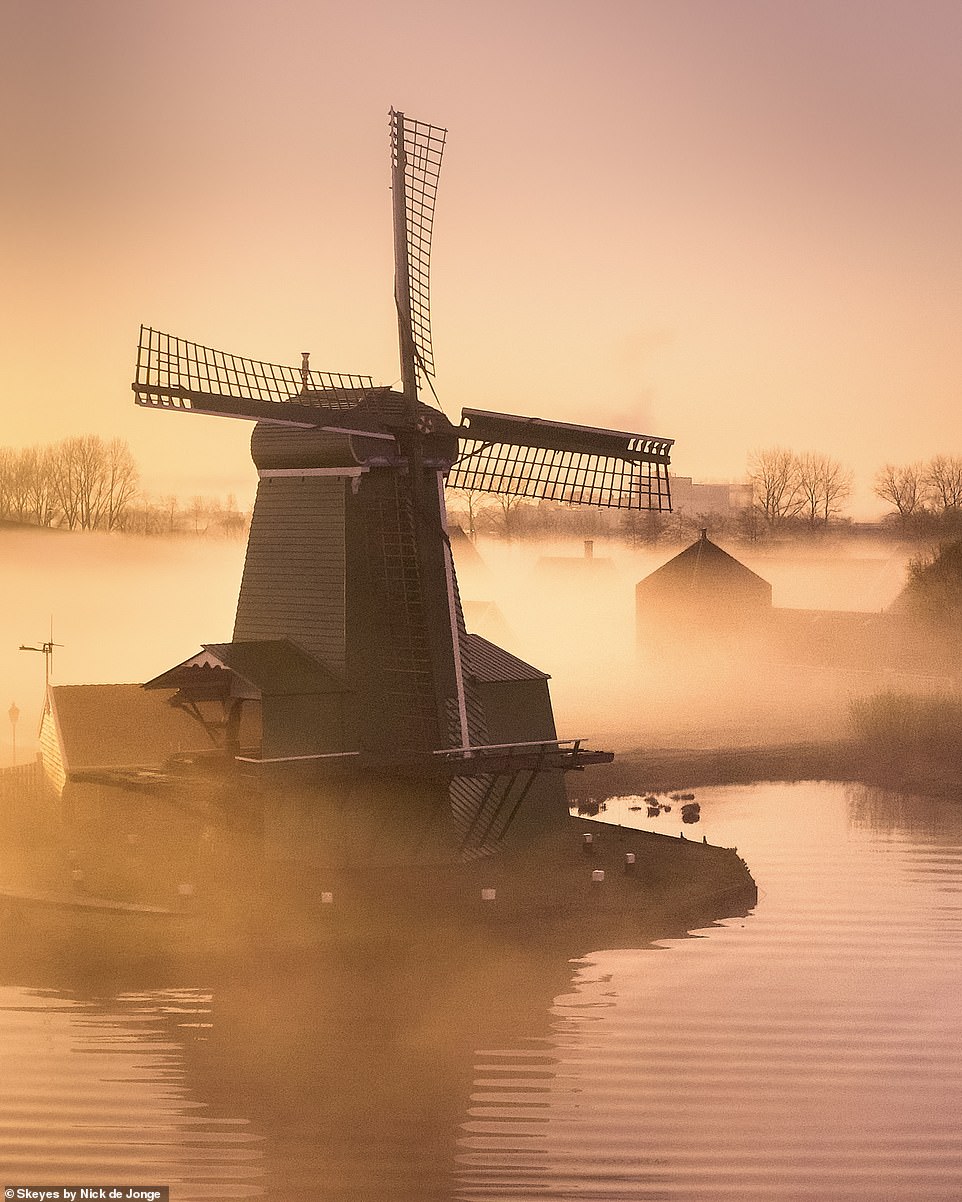 Play foggy for me Photo: One of the windmills at Zaanse Schans is the star of this enchanting picture 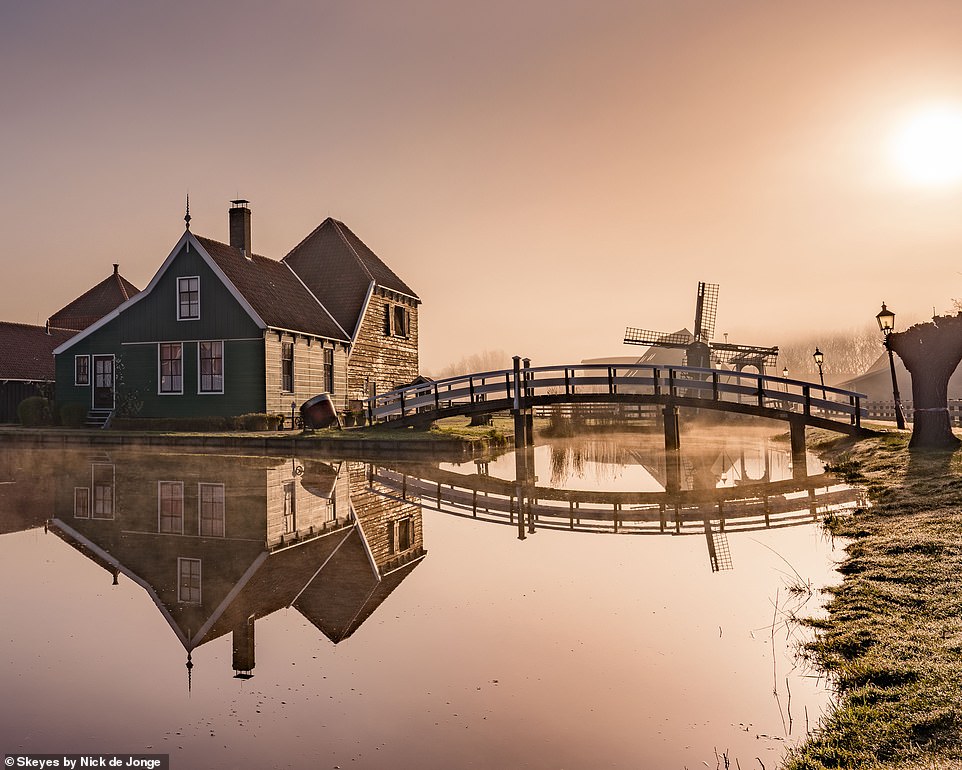 Zaanse Schans (picture) attracts around one million visitors a year in normal times. The official website of the website states: “The Zaanse Schans offers a glimpse into the heyday of the Zaan district: the 18th and 19th centuries. In the Zaan district, the oldest industrial area in Western Europe, around 600 windmills were once active at the same time. This was a direct result of trade in the Dutch Golden Age (17th century). ‘ 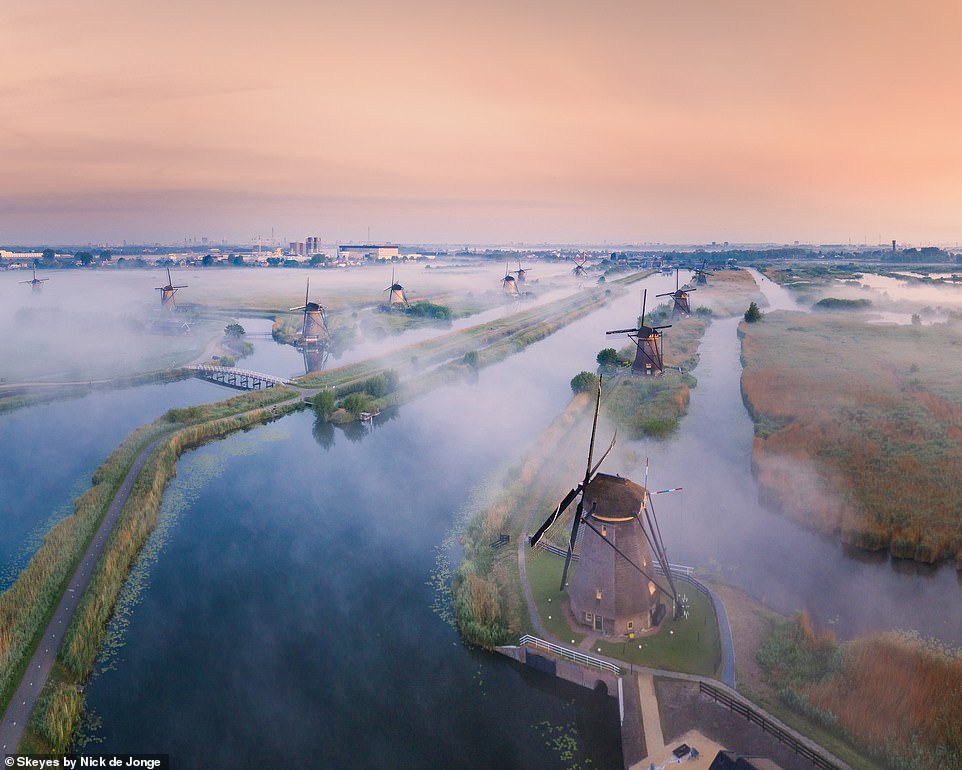 Fog hovers over the windmills in Kinderdijk. The village website explains that a thousand years ago the entire area was “one large peat bog trapped between raging rivers”. But over the centuries the humid landscape has been tamed with dikes, sluices, windmills and pumping stations 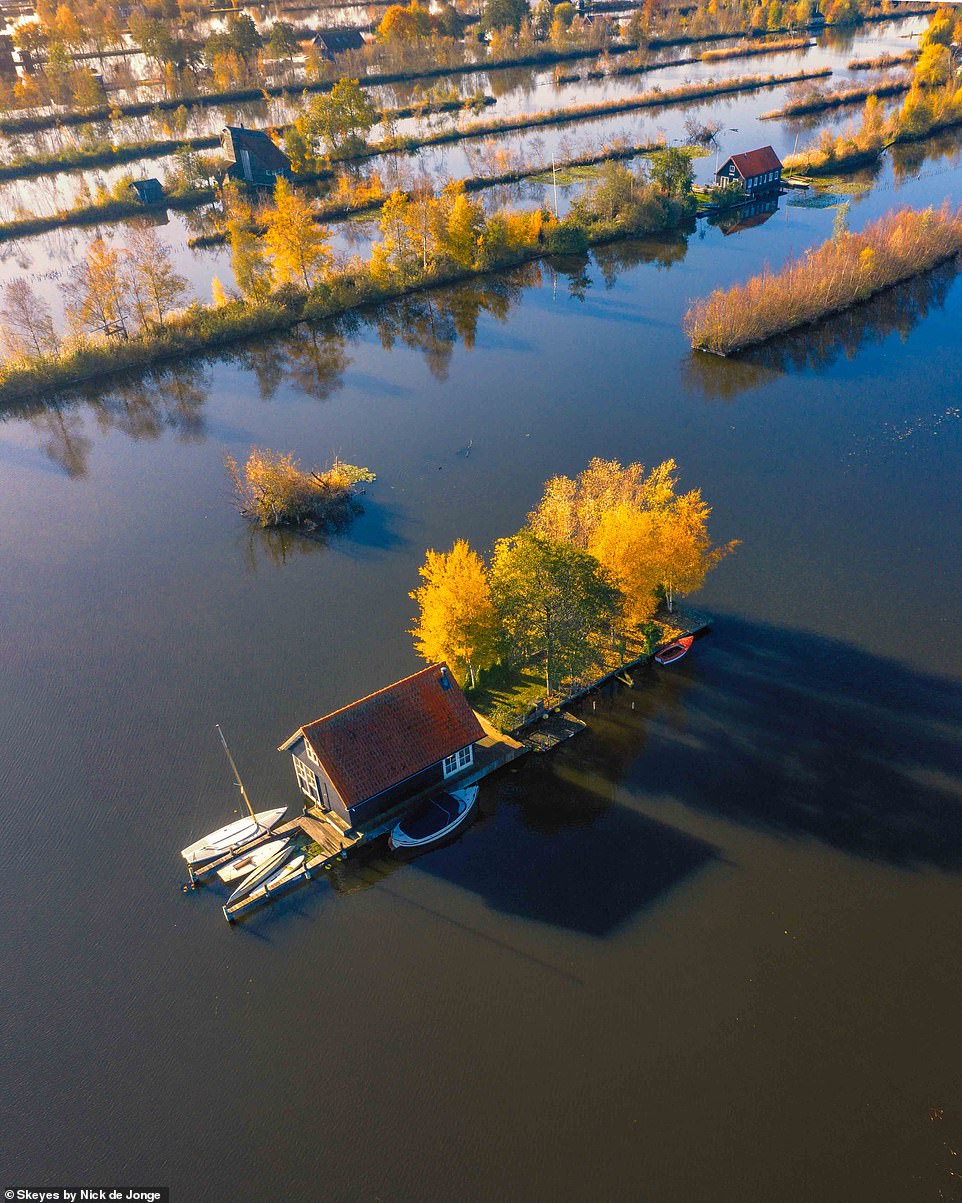 Check out the Loosdrecht Lakes between Utrecht and Amsterdam. This series of interconnected lakes contains ribbons of tree-lined sand islands, some of which are home to vacation homes 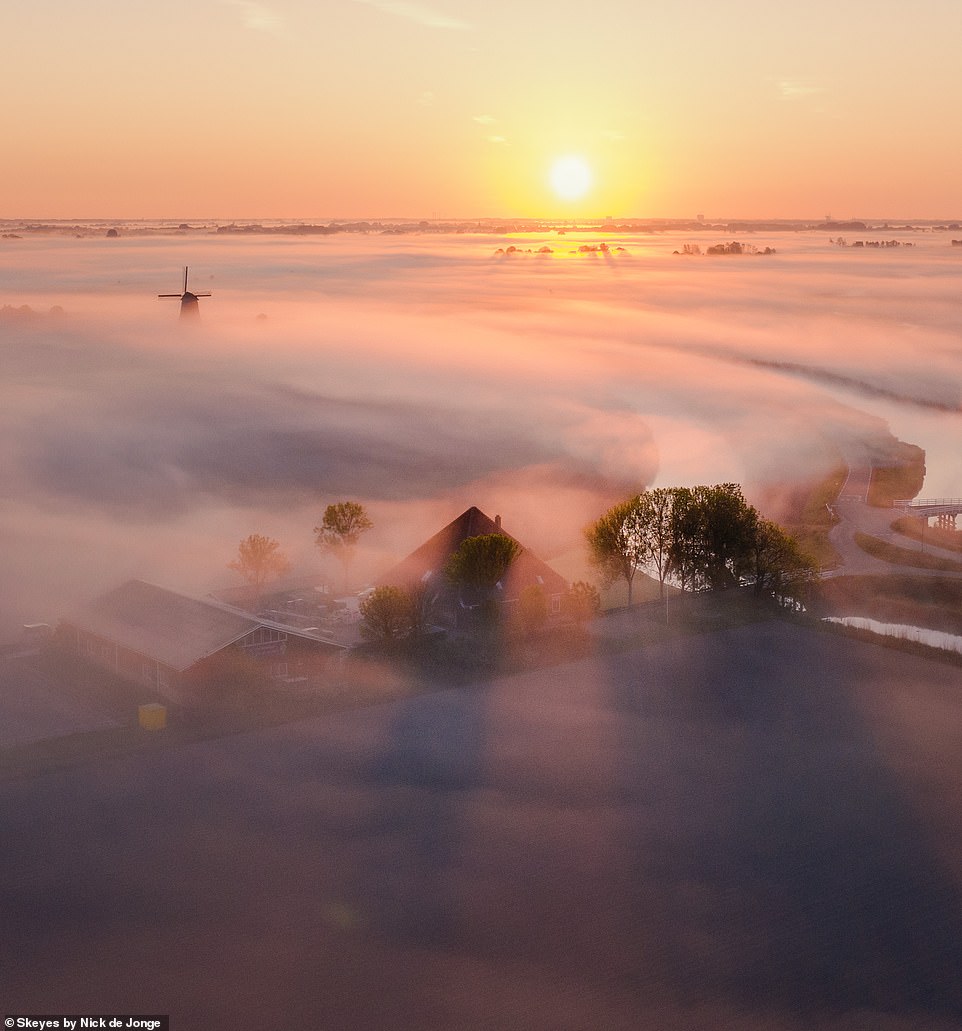 Nick said: “The early morning landscape with light fog is my favorite landscape.” Schermerhorn is shown 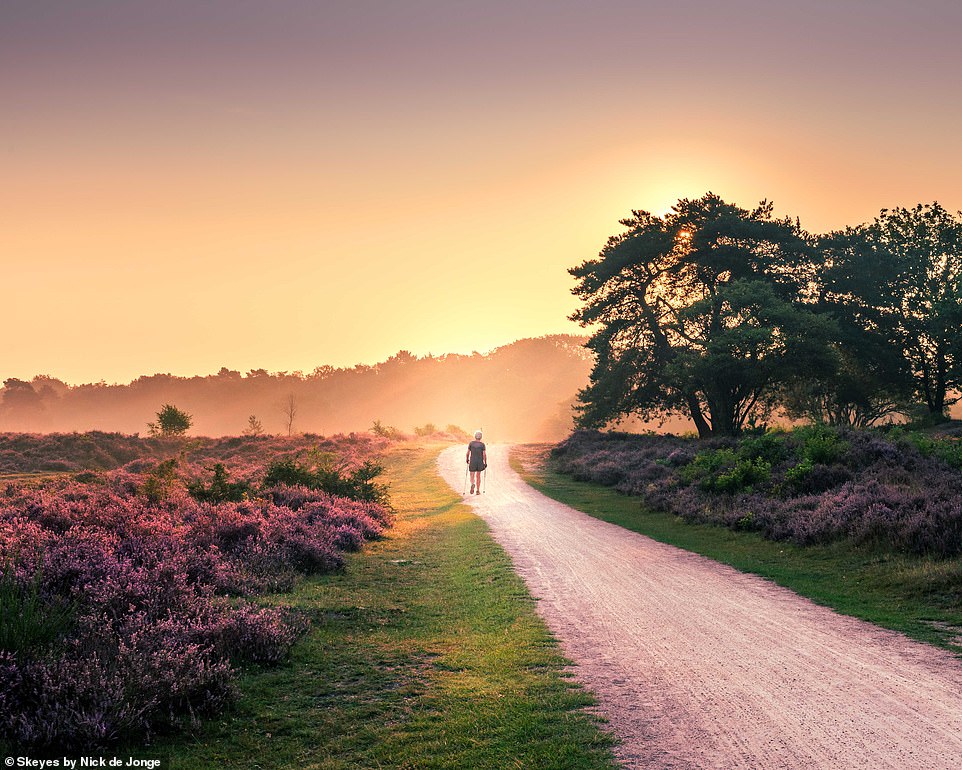 This fascinating picture was taken in a heather area called Zuiderheide in North Holland. Nick said in his caption, “I tried to use some ‘leading lines’ to focus on the subject of the photo. the hiker ‘ 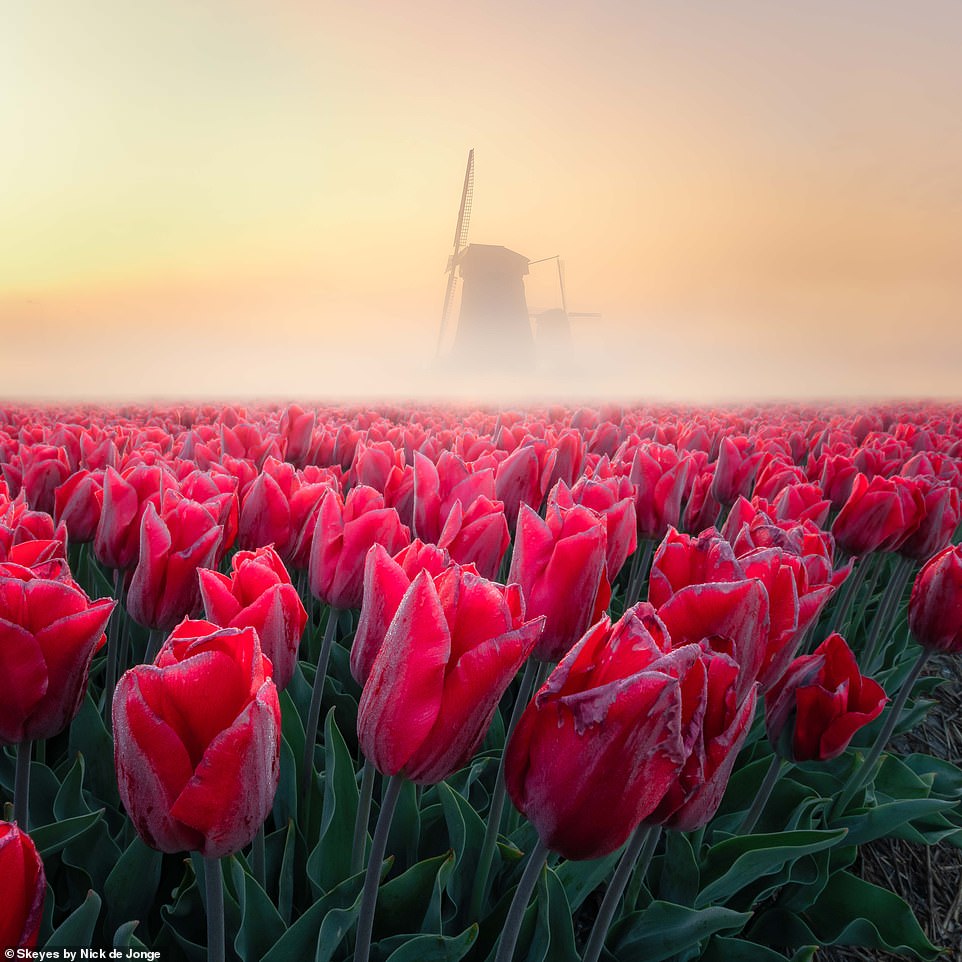 This is one of Nick’s favorite shots from the 2020 tulip season. It was taken near the town of Alkmaar

The US Army will buy more anti-personnel mines