Chinese factories make most of the world’s bicycles, even those marketed in the UK as American as apple pie. I decided to cut out the middleman and import my own bike – but I did it the hard way by driving it back from China to my home in Newcastle, a 9,300-mile journey through 15 countries.

Giant of Taiwan makes bicycles for many of the leading US and UK bicycle manufacturers, but also sells Giant branded bicycles. And I finished a 2019 Asian backpacking trip in China to pick up a sturdy bike from the company’s factory in Shanghai.

After a slap-up lunch (the factory people treated me like royalty), I strapped bags that I had carried across Asia on my back to the bike I could just as easily have bought in Europe and headed home .

Ready to roll: Josh, 23, was treated like royalty at the giant factory near Shanghai. Then he made his way to Newcastle 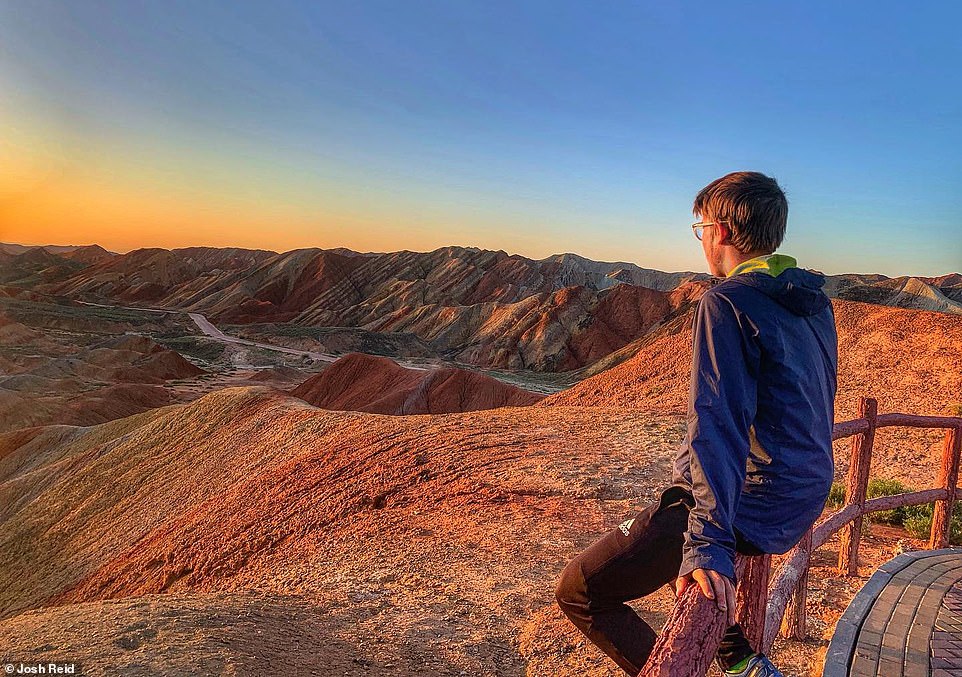 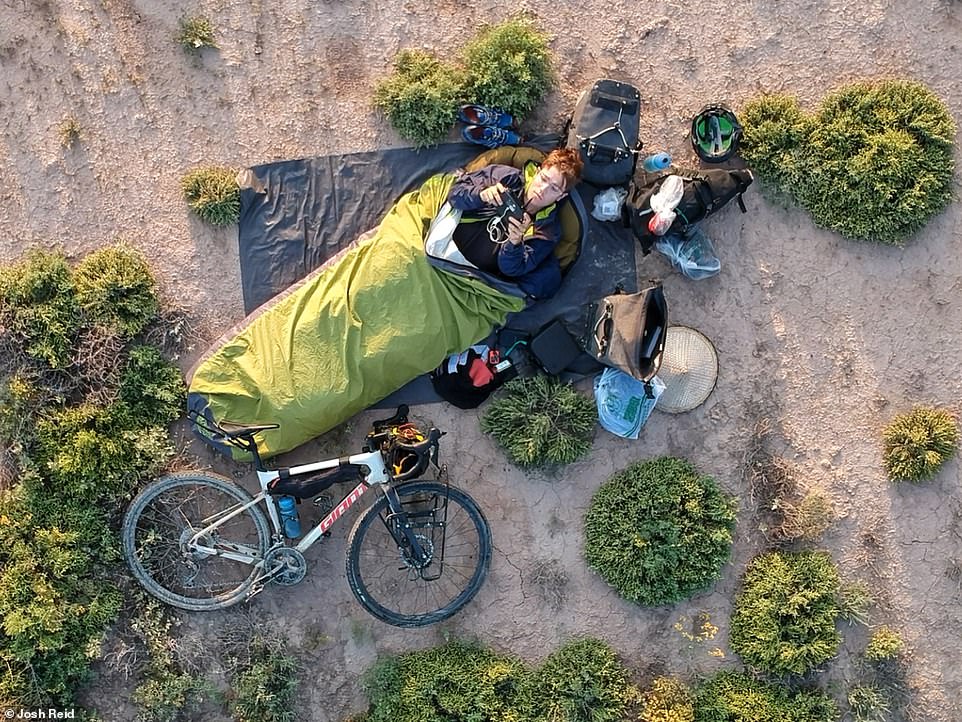 A drone shot of Josh’s sleep structure in China. He didn’t take a tent as that would have slowed him down 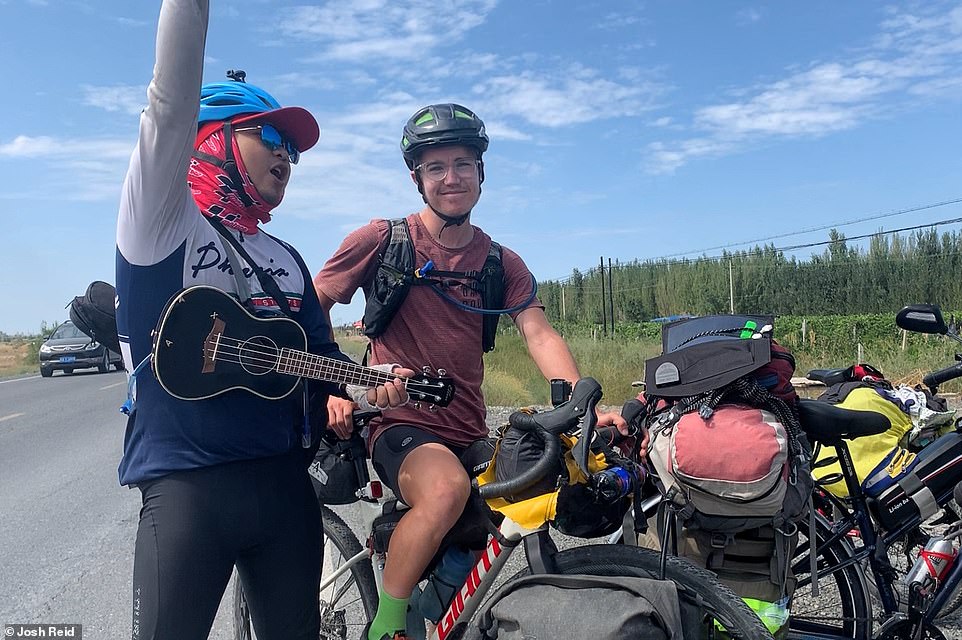 I started out in a heat wave in late July and slept in hotels when I was forced to by Chinese police (they are pretty strict with independent travelers – although they sometimes bought me food too), but I usually camped in a sleeping bag by the roadside. I haven’t packed a tent: too heavy. I wanted to go home quickly. And I ended up doing up to 200 miles a day a lot.

China has some world class bike routes – I didn’t see any others until I reached Europe. After Xi’an – the home of the terracotta warriors – I followed the truck-heavy route of the old Silk Road, but unlike most western bike tourists, I drove from east to west.

Once away from the big cities, there weren’t many streets to choose from, which made navigation a breeze. I left China, traveled to Kazakhstan and drove to the largest city in the country, Almaty, where I had a massage in one of the city’s public baths. This was the last taste of normalcy for a while when it could be called normal to be beaten with oak leaves and then dipped thinly while naked men swam around me. 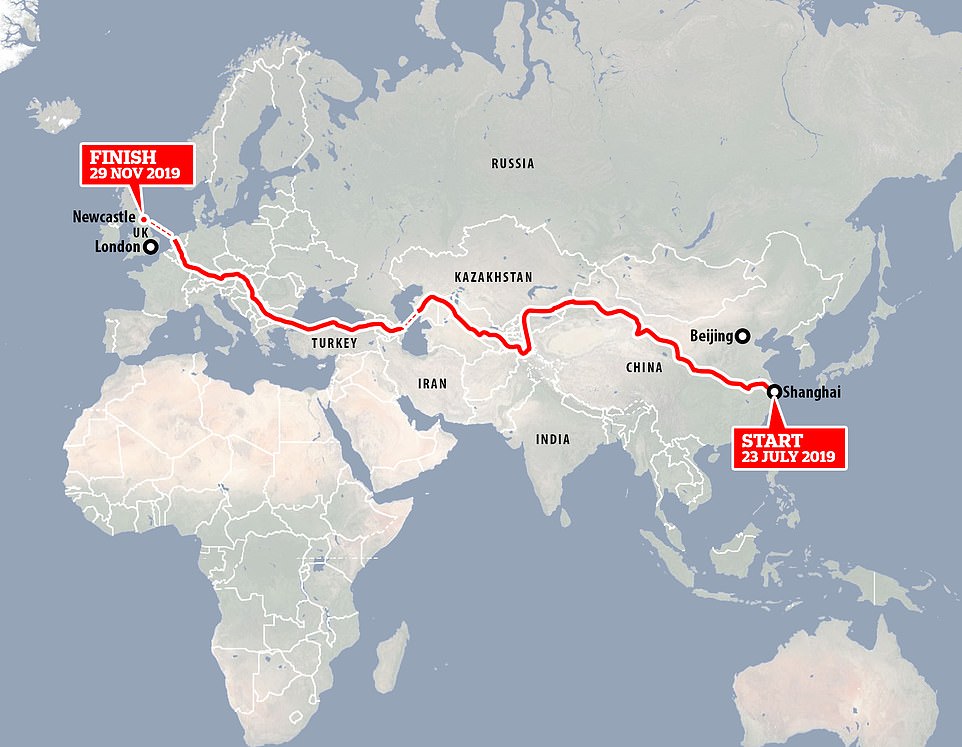 Josh covered 9,300 miles through 15 countries on his epic bike ride from Shanghai to Newcastle 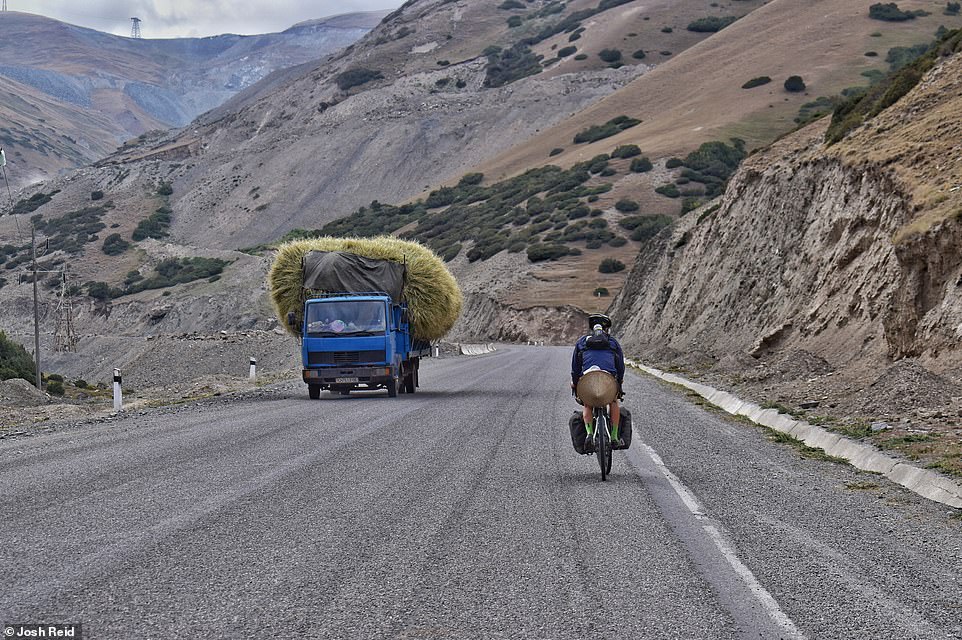 Climb up a pass in Kyrgyzstan and herders bring food for their cattle, ready for winter when they move up high 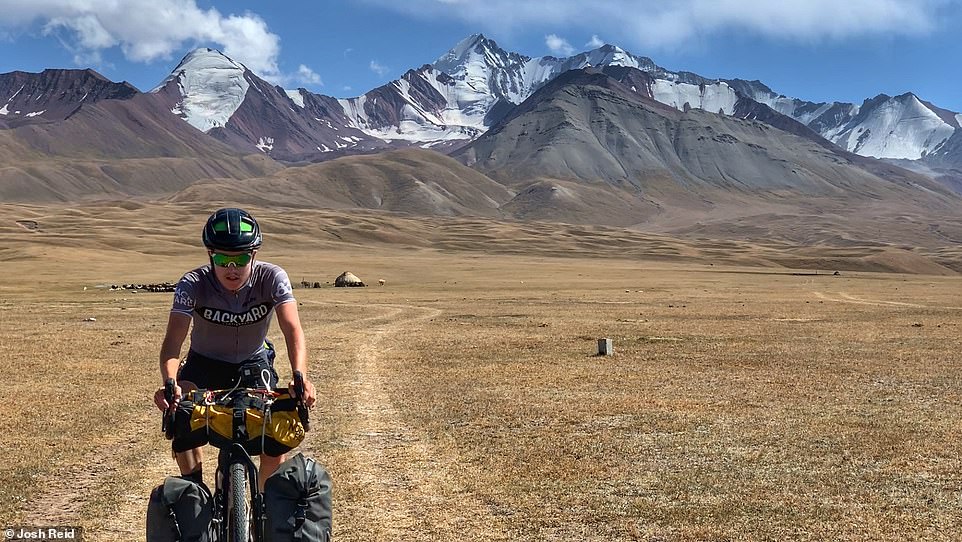 Josh rides past yurts in Kyrgyzstan, where he joins the Pamir Highway – often thought to be on top of the world 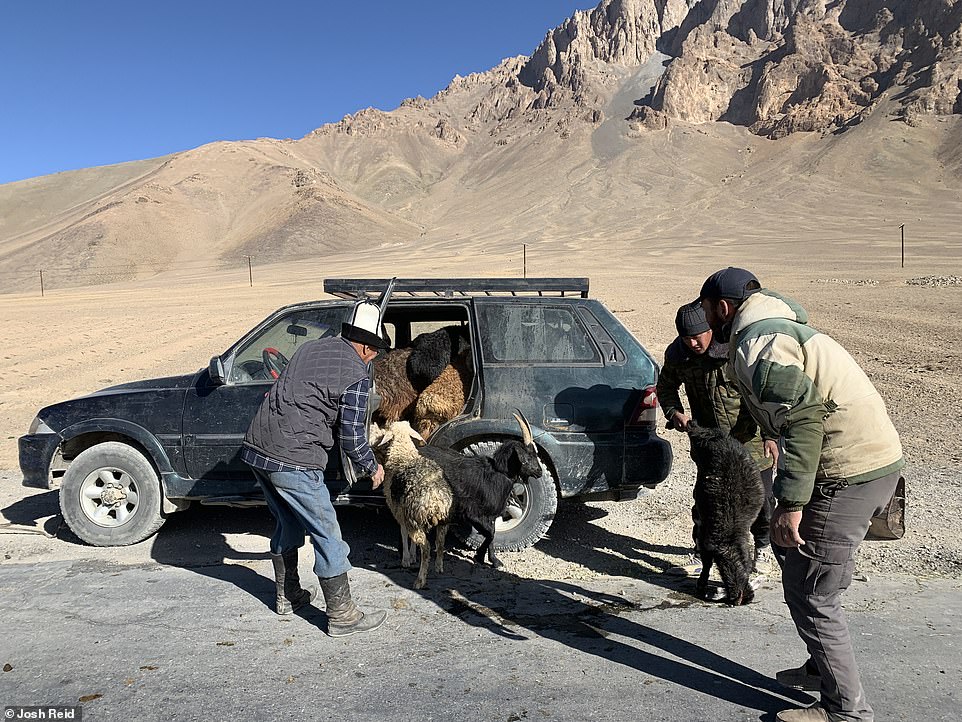 Josh described this somewhat weird scene in Kyrgyzstan: “I drove past these guys who were trying to cram goats into an SUV. They’d get one in and then another out that they’d chase around the car. “ 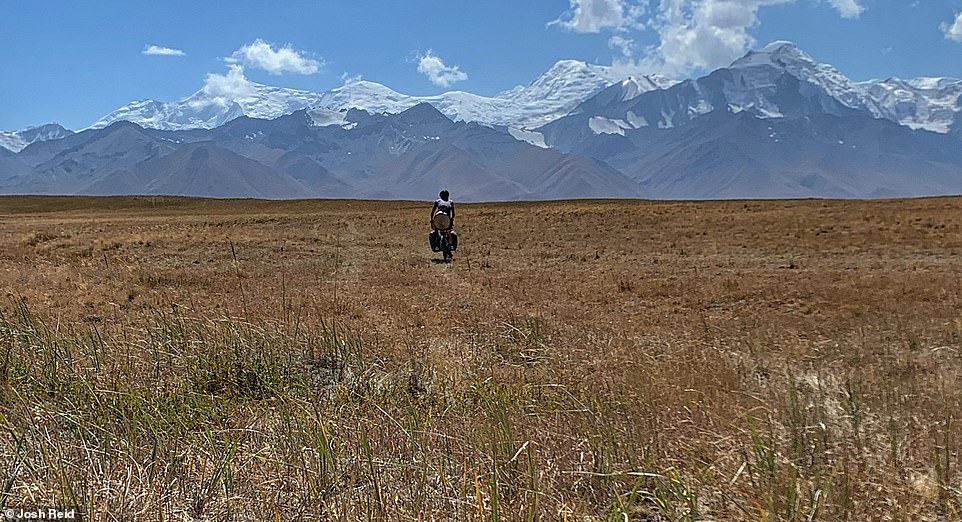 Pine-covered landscape: Josh makes tracks for the mountains in Kyrgyzstan

Instead of taking the flat desert route through Kazakhstan, I made a detour on one of the wildest and highest roads in the world, the Pamir Highway, at a point that reached an altitude of 15,000 feet. Often referred to as the roof of the world, this winding, mostly paved road took me through Kyrgyzstan and Tajikistan, where I drove 250 miles along the border with Afghanistan.

In a Tajik village I asked a passerby where I could sleep – he called to friends who said their grandparents would take care of me. They did and fed me too and didn’t ask for payment. This hospitality – so welcome and so touching – was the norm across Central Asia. During my trip, I was invited to sleep in several mosques and lived in many people’s homes, including a bed in a roadside watermelon stand.

I had bought a small drone from the DJi store in Shanghai but didn’t bet it would be a hot property in some countries. Before entering Uzbekistan, I read that those caught importing a drone could face a three-year prison sentence. I parted the machine as best I could and distributed the tell-tale bits around my few pockets, hoping not to be fully searched. I didn’t need to worry while sailing through customs – bike travelers are clearly not considered a threat. 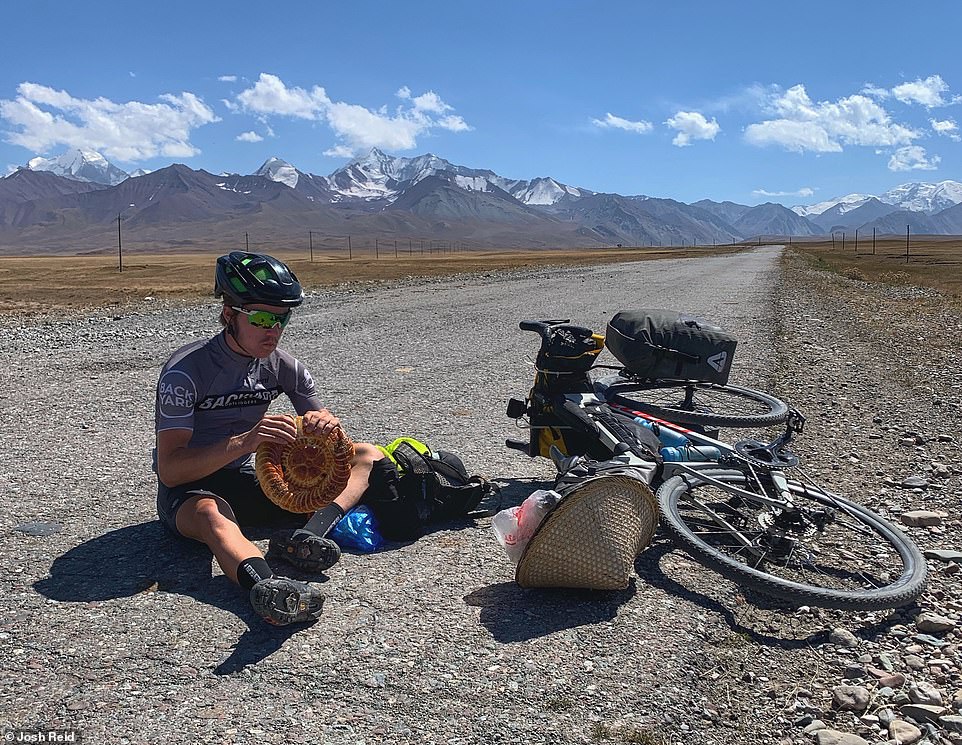 A snack break in Kyrgyzstan in the middle of the Pamir Highway with traditional bread bought at a market in Osh, the country’s second largest city 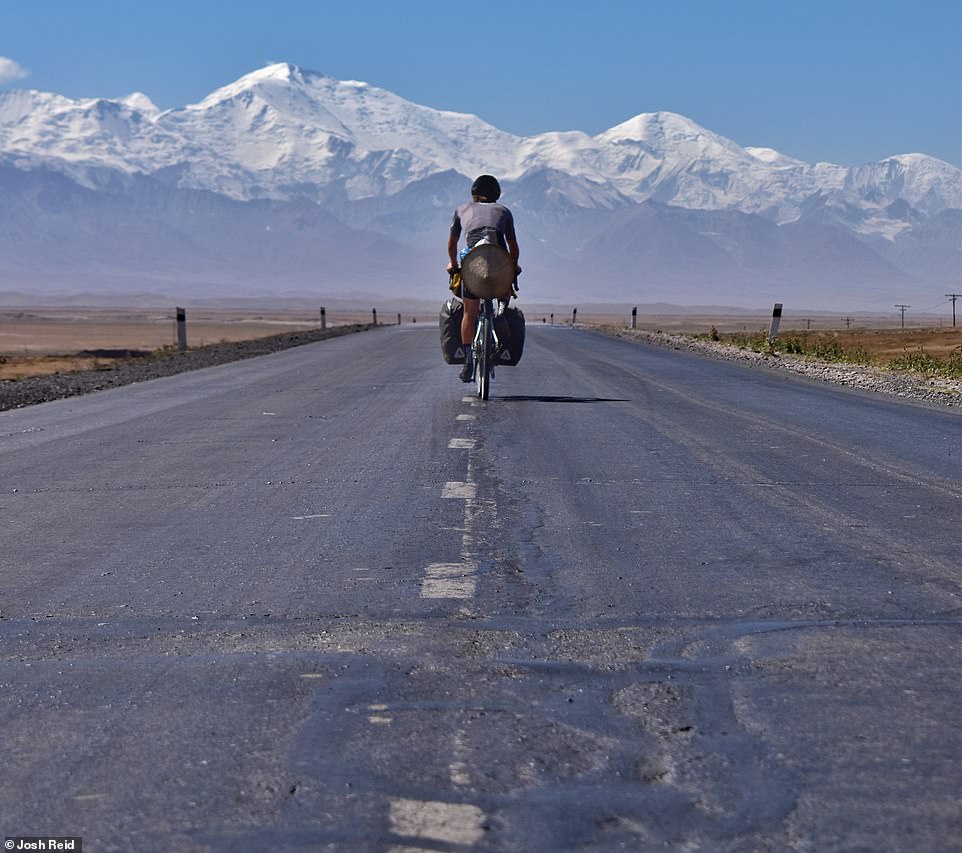 Descending to the village of Sary-Tash, Kyrgyzstan. Josh said of the picture, “I thought,” The clouds are amazing, “but the closer I got, the more I realized that they weren’t clouds, they were huge mountains.” 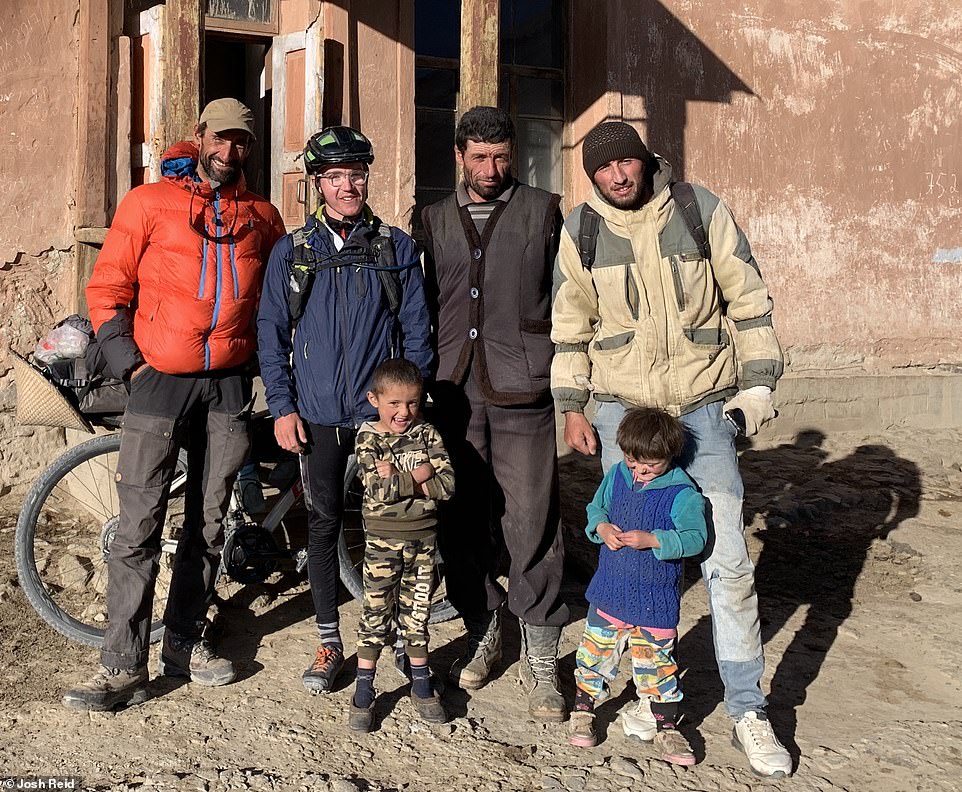 Shepherds sheltering Josh and a French hiker on a pass in Tajikistan. Josh said, “You saved us from a very cold night. They allowed us to share the wooden platform they slept on and provided us with food. ‘ 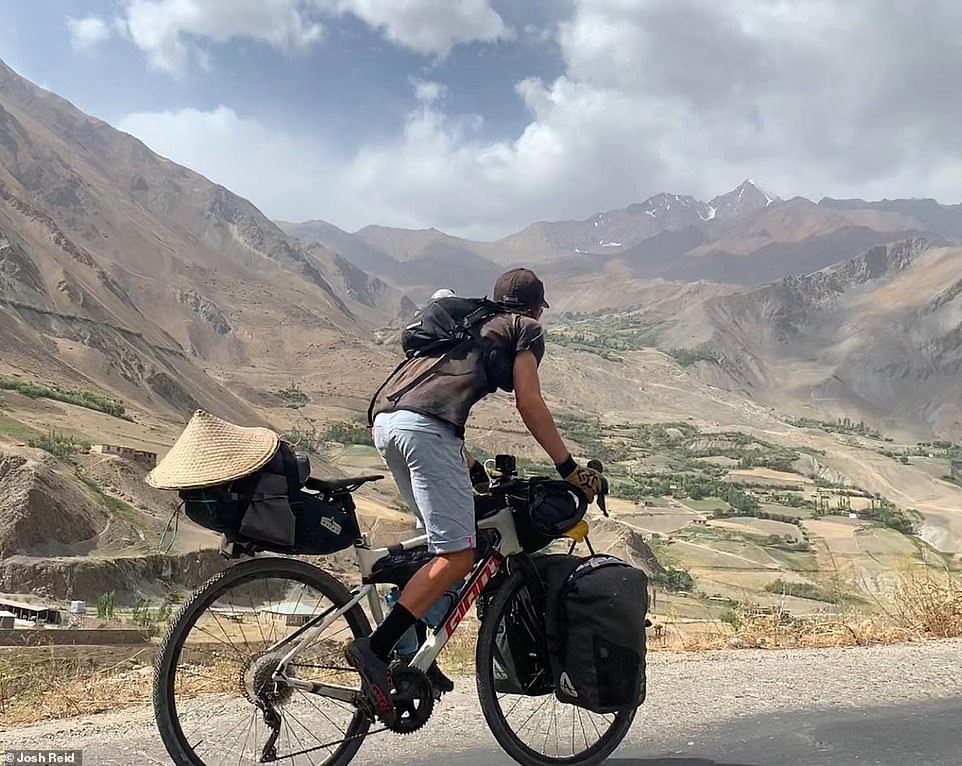 This picture was taken in Tajikistan with the Panj River not visible below. All the farms, fields and hills are in Afghanistan 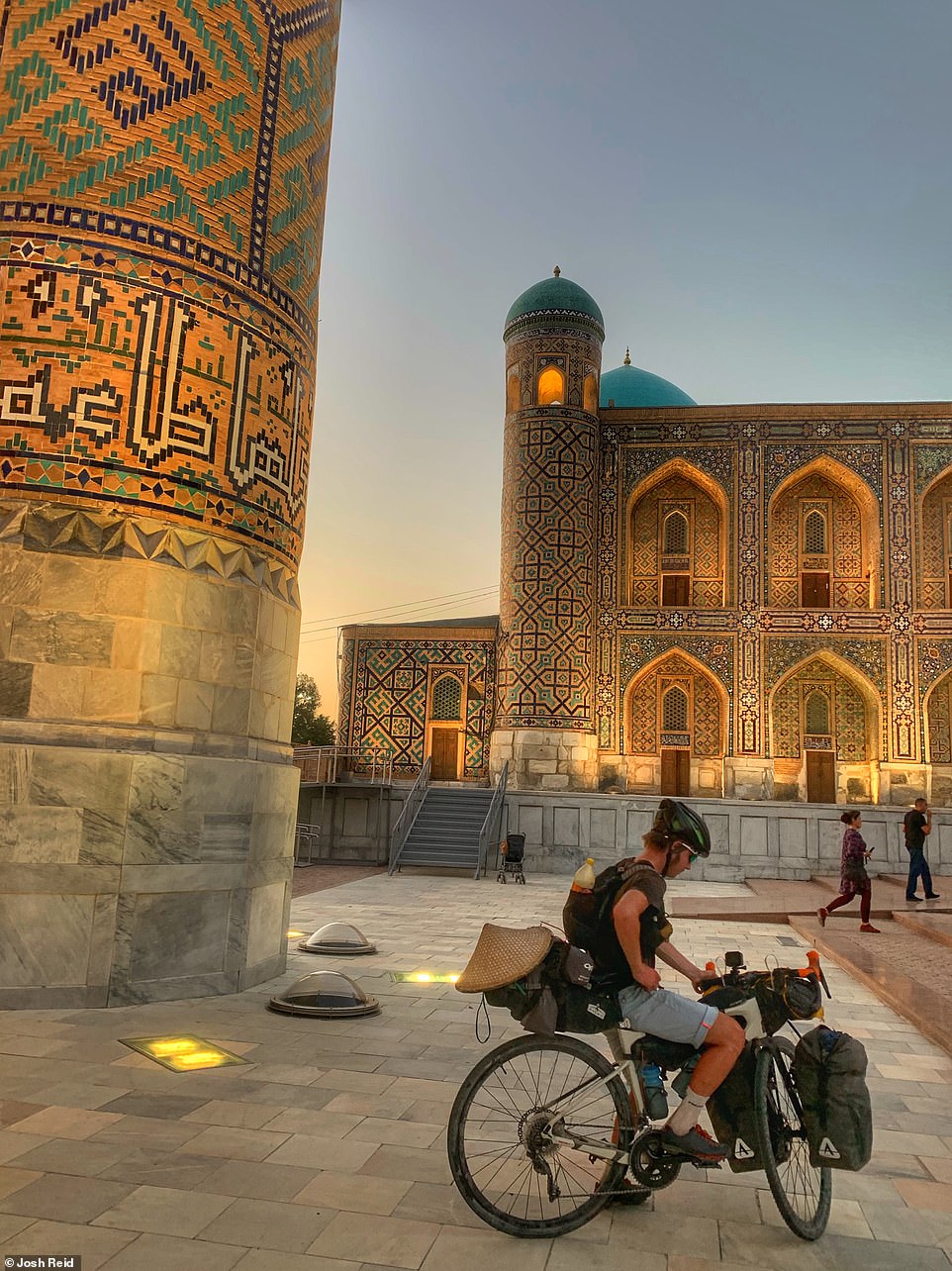 Arrival in Samarkand, Uzbekistan, with the beautiful buildings there lit up 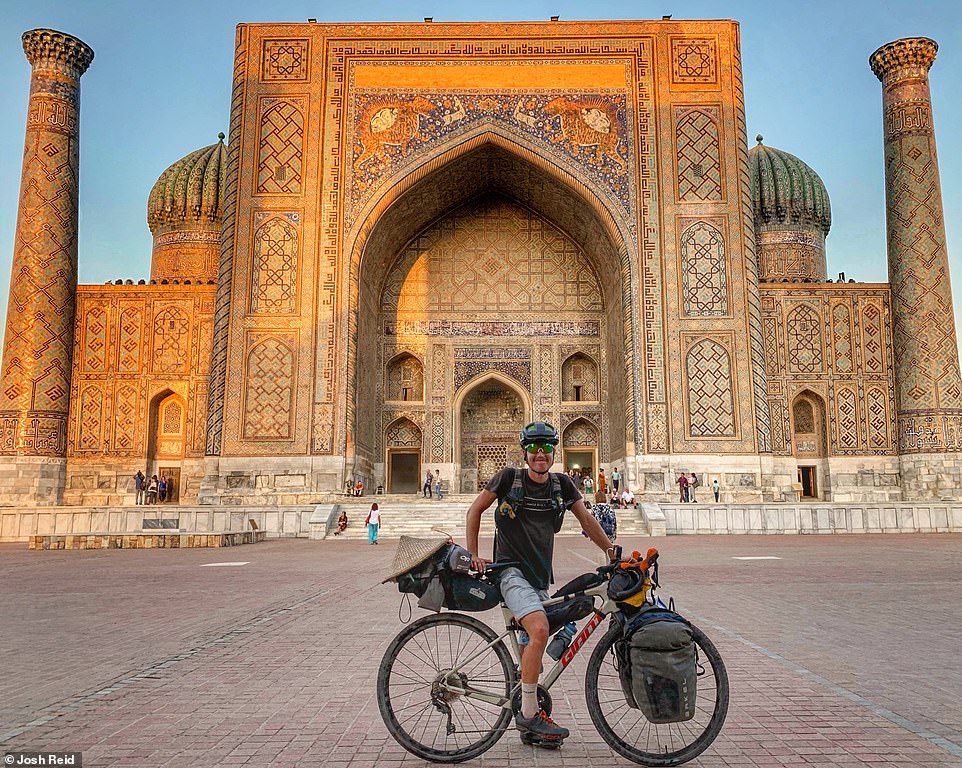 Standing in front of the Registan, the heart of the ancient city of Samarkand

Josh traveled easily. The bike was a Giant Revolt gravel bike with a carbon frame and tubeless tires – no punctures on the way. The bags were from Arkel in Canada. An inflated Robens sleeping mat from Germany kept him comfortable at night. Photos and videos were taken on an iPhone XS, GoPro Hero 7, and a DJi Spark drone. He rode in bicycle clothes from the Backyard Bike Shop in Gateshead and at times also wore a rice farmer’s hat. His route from China to Great Britain was followed with a Garmin InReach GPS device.

It could have been a different matter with the Iranian Religious Police, so I decided to cross the Caspian Sea instead of taking the land route through Iran. There’s no regular ferry, but if you’re camping in the port of Aktau in Kazakhstan, you can eventually hop on a cargo ship that goes your way.

After turning my thumbs for 36 hours, I boarded a ship that was then anchored for another 36 hours.

In Azerbaijan, back on my bike, I was driven by pomegranates and sugary tea and reached Georgia in a day or two.

The first signs of autumn warned me that winter was approaching and I’d better fidget – I didn’t have the camping gear or clothes to survive the cold weather for long.

The quickest and easiest way through Turkey led over the Black Sea coast to Istanbul.

After taking the ferry across the Bosphorus, Asia was finally behind me.

From Budapest I followed the signposted Eurovelo cycle path along the Danube and kept the Austrian Alps on my left. I cycled quickly through Luxembourg and Germany and benefited from cycle paths again.

In the Netherlands, I stopped at Giant’s European headquarters and was rewarded with another real royal fodder.

Just before winter, I drove a few wet hours from Amsterdam to the port of Ijmuiden, where I boarded the DFDS ferry to Newcastle and home about four months after I left Shanghai. 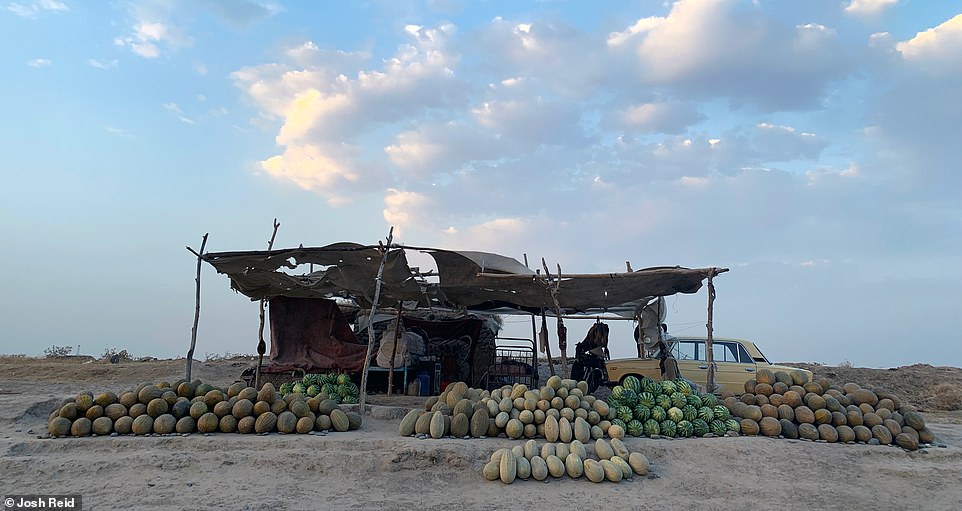 Josh slept in a bed under the covers of this watermelon stand in Uzbekistan. “I was hungry and was happy to be able to eat one of the supplies,” he said 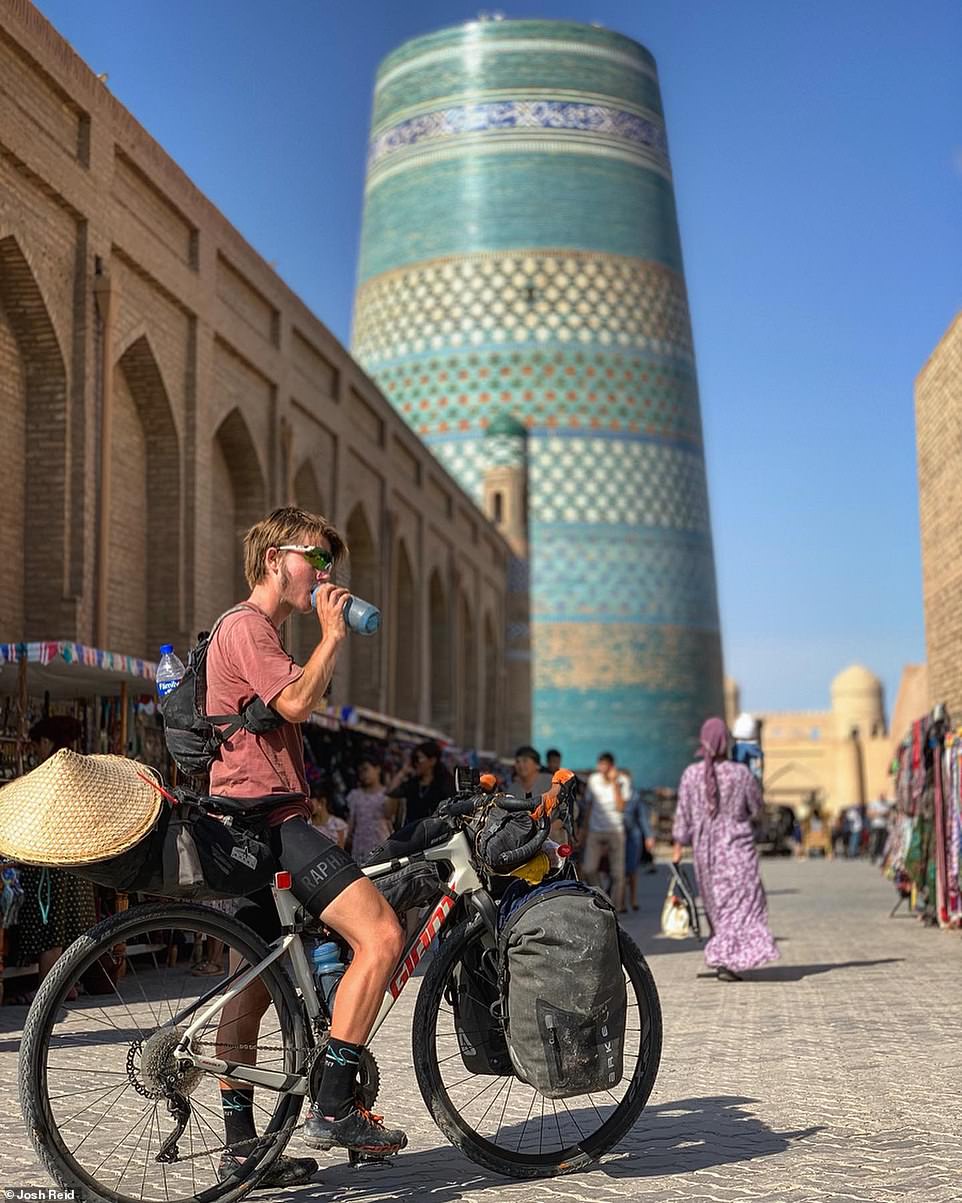 Drink next to a beautiful blue minaret in Khiva, Uzbekistan 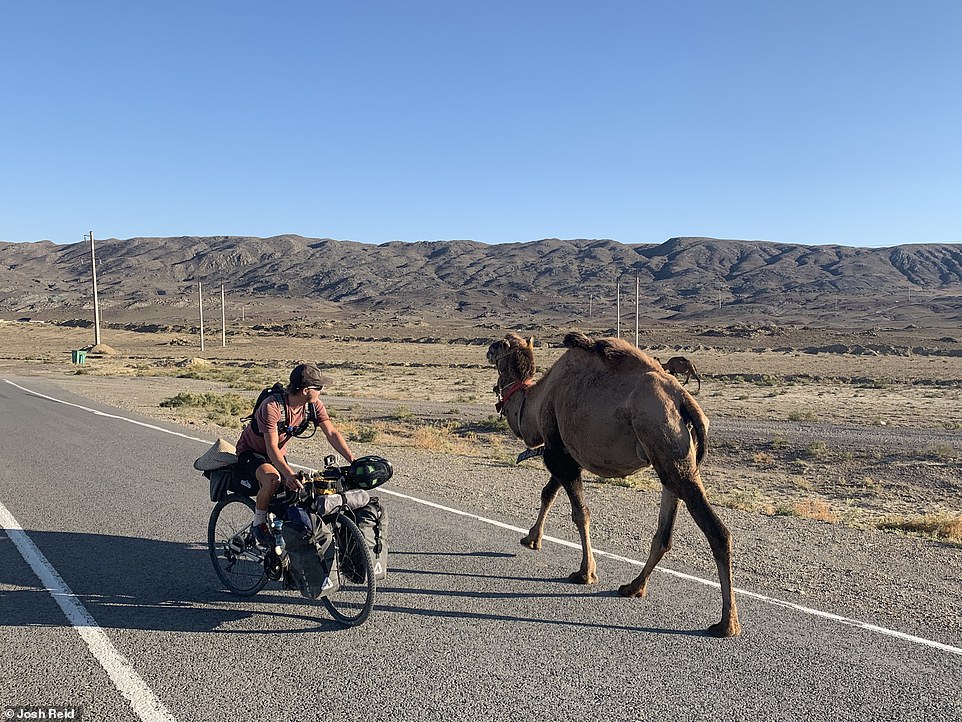 Cycling past camels in the desert in Kazakhstan. Josh took a ferry from Kazakhstan to Azerbaijan to avoid Iran and a possible inspection of his drone 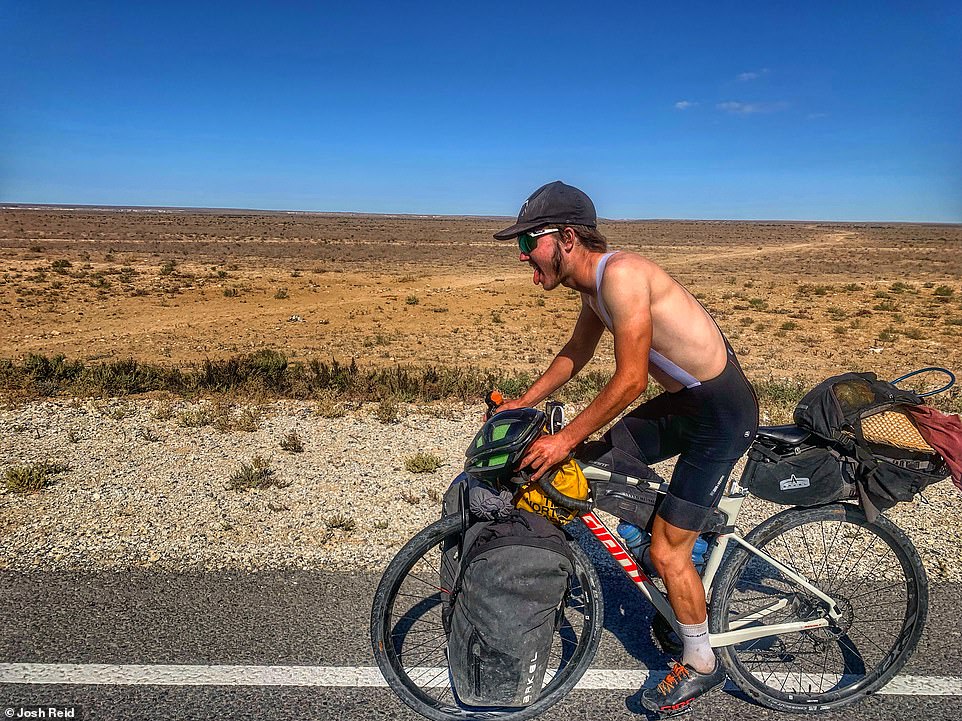 Trying to even out the tan lines in the Kazakh sunshine 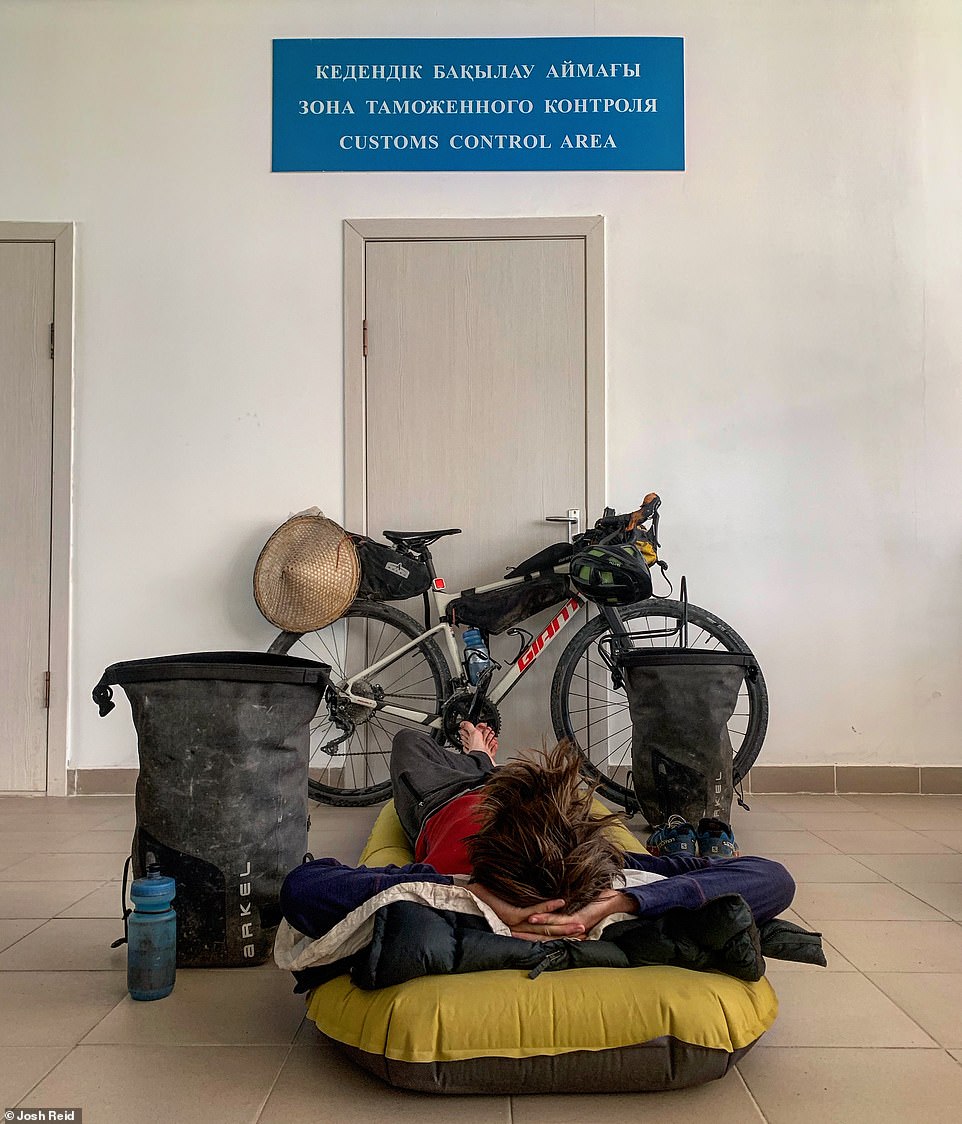 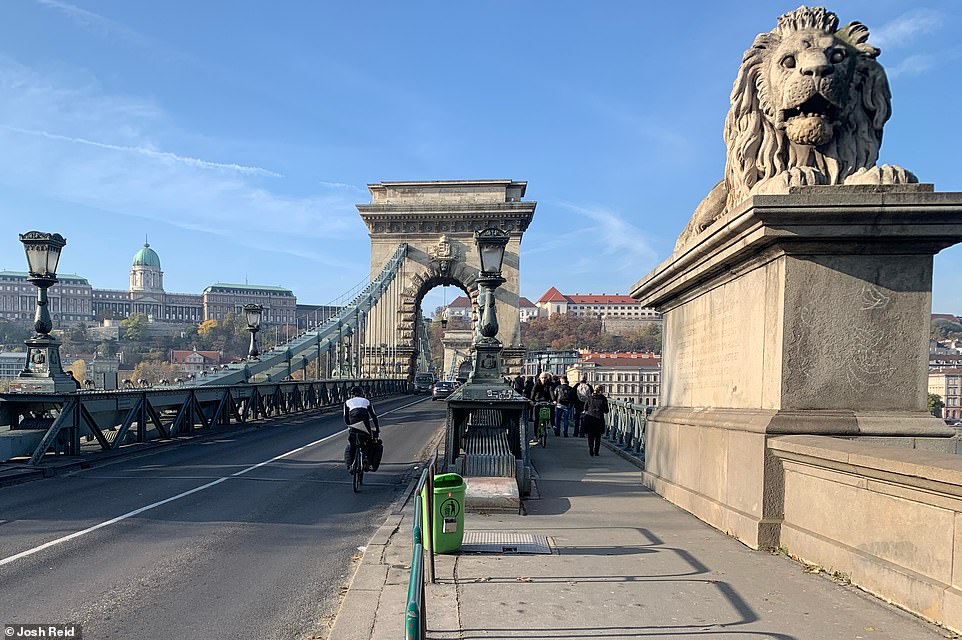 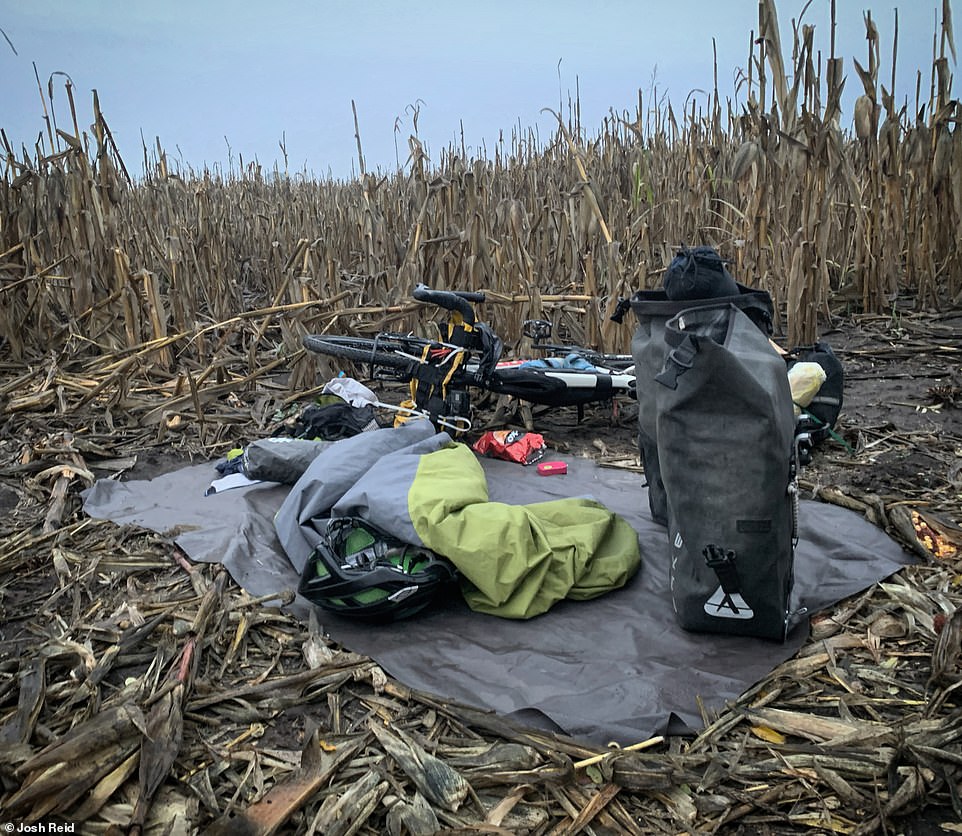 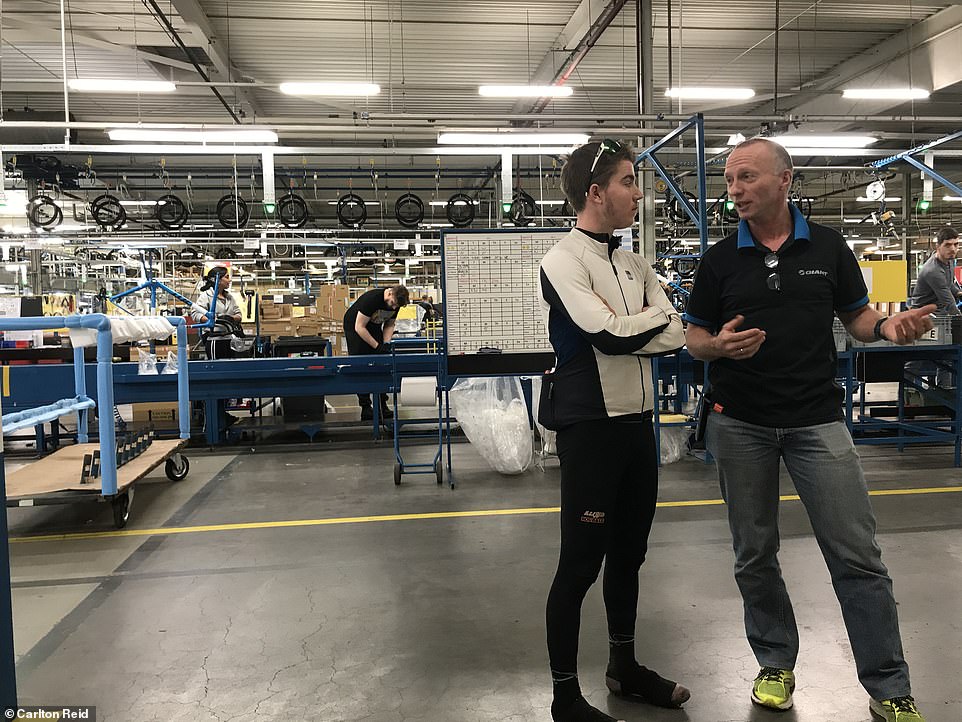 Josh with Frank Veltman, second in charge of Giant Europe in Giant’s Lelystad factory in the Netherlands. Josh said, “Not only did the friendly people at Giant treat me to another slap-up feed, they also changed my worn tires and serviced the bike.”