Channel 4 is blown up for “spineless handover to PC police” after SAS, who dares to fire star Ant Middleton for criticizing BLM and Covid’s lockdown rules, was fired

By Luke May for Mailonline

Channel 4 was blown up for a “spineless handover to PC police” for the sacking of SAS: Who Dares Wins star Ant Middleton after sharing controversial views on Black Lives Matter and Covid-19 protesters.

He later apologized for the comments, saying he was “anti-racist and non-violent”.

At the start of the coronavirus pandemic, he said he would ignore the advice of Covid-19 and urged people to “carry on normally”.

Today Channel 4 announced that it will no longer work with the 40-year-old because “our views and values ​​do not match”.

Good Morning UK host Piers Morgan later tweeted: “Absurd that Channel 4 should have fired Ant Middleton for his opinion. He is a war hero for the SBS special forces. What did they think they were doing – a shrinking purple choirboy?

‘Such a spineless handover to the PC police. Ant is a great guy – if he doesn’t strangle me. ‘

Ant Middleton was removed from Channel 4’s SAS: Who Dares Wins after the channel said “our views and values ​​do not match”. The former Royal Marine called the Black Lives Matter protesters last year “absolute scum” and received criticism for comments at the start of the Covid-19 pandemic

In Middleton’s military career, he served in the Special Boat Service, the Royal Marines, and the 9th Parachute Squadron Royal.

He was jailed for 14 months after attacking two police officers in his hometown of Chelmsford, Essex, in 2013.

A Channel 4 spokesperson told MailOnline today: ‘Ant Middleton will not be part of any future SAS: Who Dares Wins series.

“After a number of conversations Channel 4 and Minnow Films had with him about his personal behavior, it became clear that our views and values ​​did not match and we will not work with him again.” 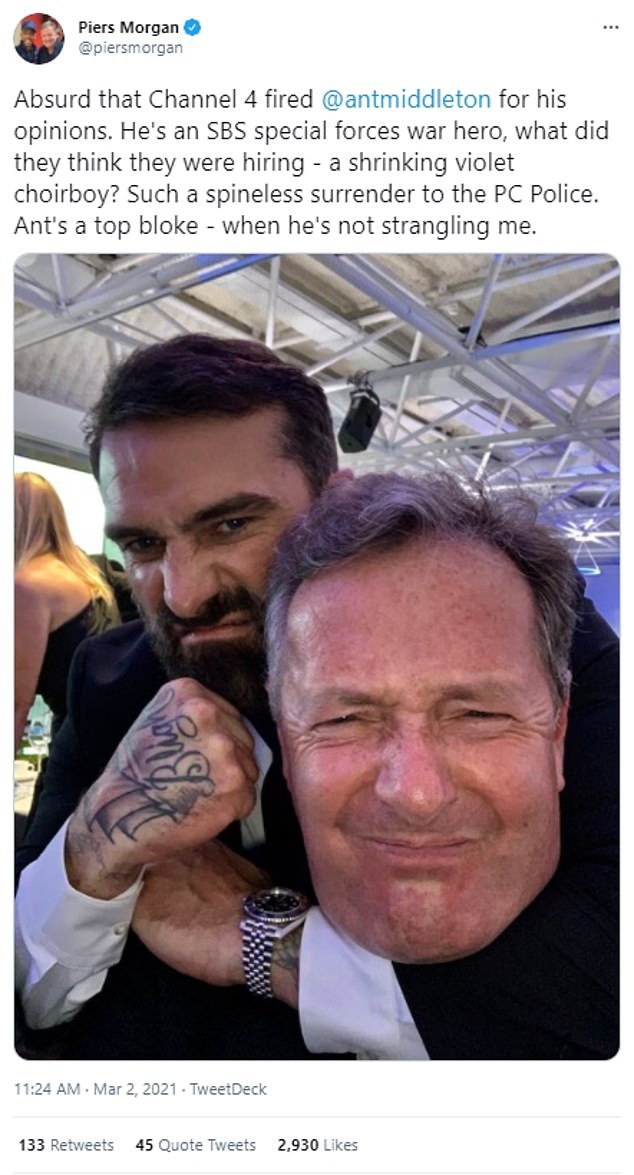 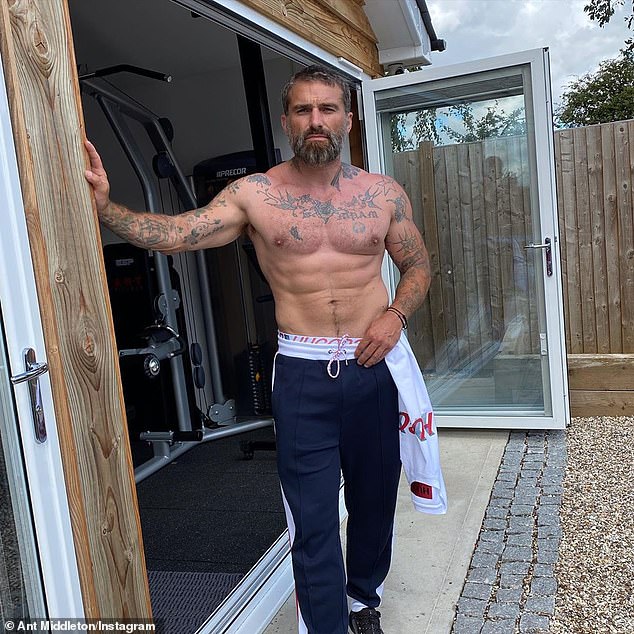 Piers Morgan said it was “absurd” that Channel 4 fired “Middleton”. But Middleton reached out to fans today, saying he had “decided it was time to move on” from the show

Celebrities like presenter Ben Shepherd, ex-soccer player John Terry and singer Olly Murrs have endorsed Middleton, saying it won’t be the same without him.

Angry fans responded to Middleton’s own announcement today saying he had “decided it was time to move on”.

Today he said to his followers: “After 5 unbelievable years I have decided it is time to switch from SAS: Who Dares Wins UK.” Great respect for my DS colleague – it was a trip I will never forget.

‘Thank you to everyone who participated and made the show what it is. Really excited about the future and what’s coming this year. “ 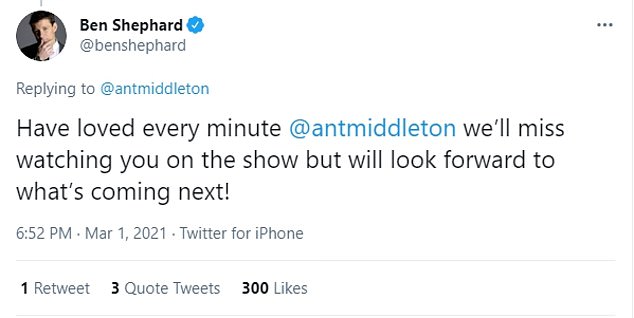 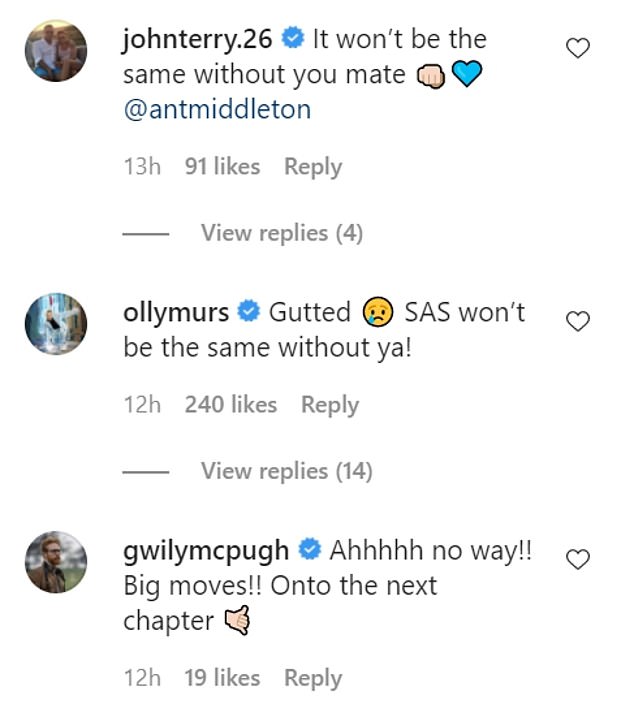 One supporter replied, “CH4 made a massive mistake and I will boycott the program in protest. You did this show and without you it will fail.

“Hopefully the other two quit after seeing how horrific CH4 treated you. Keep speaking your mind and don’t let these people silence you. ‘

Another said: ‘PC gone crazy, great program, will miss you in it. Hope to see you on our screens again soon. ‘ 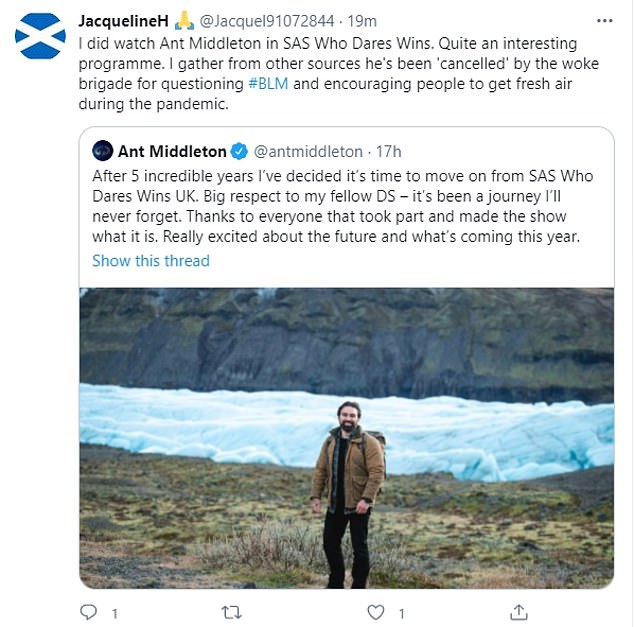 Fans threatened to boycott SAS: Anyone who dares to win when they claim to be the “guard brigade” will cost Middleton his job

Middleton was reportedly forced to quit his role as Chief Cadet of the Royal Navy after just nine months after speaking to Black Lives Matter protesters over his controversial tweet last summer.

The TV star, who took on the role in November, reportedly enraged his bosses after posting the since-deleted tweet amid protests against racial injustices following the death of George Floyd in the United States.

On June 14th, Ant tweeted, “The extreme left versus the extreme right. When did two mistakes get right? It was just a matter of time. BLM and EDL are not welcome on our streets, absolute scum. What a great example for your future generation. Bravo.’