A 48-year-old husband and 48-year-old wife were buried at a double funeral after dying from Covid-19 a few weeks before the vaccine.

Great-grandparents Peter Hurrell, 72, and Audrey, 67, from Trowell, Nottinghamshire, died 10 days apart after testing positive for the virus in January.

Audrey, a former pharmacy worker, tested positive on January 19 and was tragically found dead in her home on January 22 by her 47-year-old daughter Sarah Cox.

Peter, a former bus driver and warehouse worker, tested positive on January 8 after having a coughing fit and was admitted to hospital on January 18.

He died on February 1st at the Royal Derby Hospital with Sarah by his side.

Yesterday, the couple were buried in a joint ceremony in a cemetery just five minutes from Sarah’s house, which she plans to visit regularly.

Great-grandparents Peter Hurrell (72) and Audrey (both pictured above) (67) from Trowell, Nottinghamshire, died 10 days apart after testing positive for Covid-19 in January 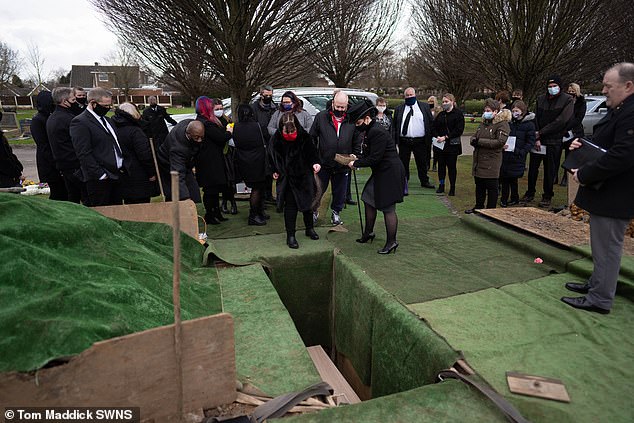 Yesterday, the couple were buried at a double funeral in a cemetery just five minutes from their daughter Sarah’s home, which she plans to visit regularly 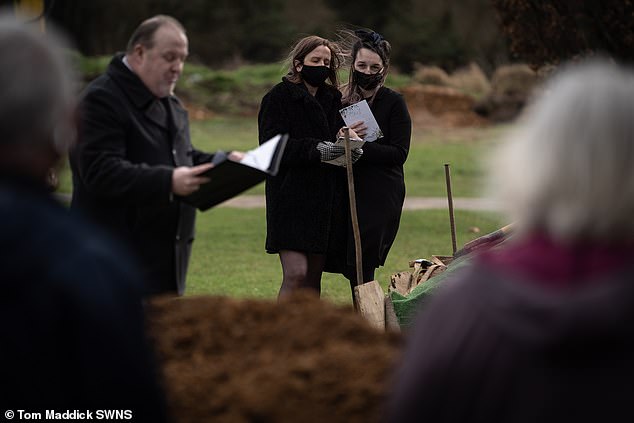 Mourners gather to pay tribute to the couple. Peter’s letter asking him to schedule an appointment for his first Covid vaccine arrived two days after he was hospitalized

Peter suffered from multiple myeloma, a type of bone marrow cancer, and amyloidosis, a group of rare diseases caused by the buildup of an abnormal protein in his organs.

His letter asking him to schedule an appointment for his first coronavirus vaccine arrived two days after he was hospitalized.

But Sarah said Audrey was “fit as a violin” with no underlying health conditions, which made her untimely death even more unexpected.

She said: “Mama’s death came as a shock to us because she was fit as a violin. Papa was diagnosed with cancer five years ago and was not doing very well.

‘Mom was told by the doctors when Dad went to the hospital on January 19th that he would not be coming home.

She passed away on Friday. I had been to her on Thursday evening and asked her if she wanted anything, but she just wanted some water and asked me to put her to bed.

When I walked around the next morning, it was still in the position I had left it in. The ambulance arrived within three minutes and the paramedics were great but there was nothing they could do.

I think she died of a broken heart. I think after testing positive for Covid and learning that she would never see her husband, her best friend, again, she couldn’t move on. 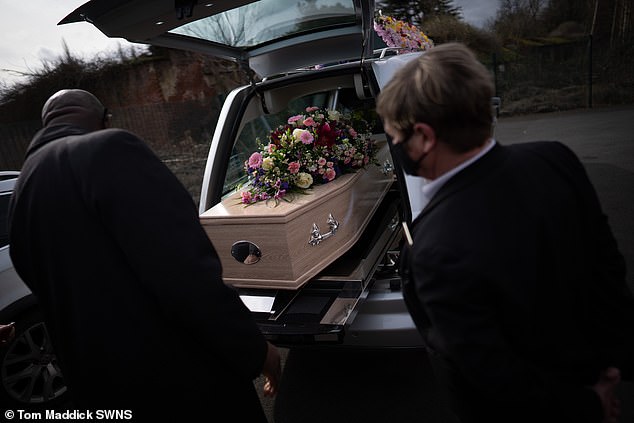 Before the double burial, a coffin is moved from the back of a hearse. Peter suffered from multiple myeloma, a type of bone marrow cancer, and amyloidosis, a group of rare diseases caused by the buildup of an abnormal protein in his organs 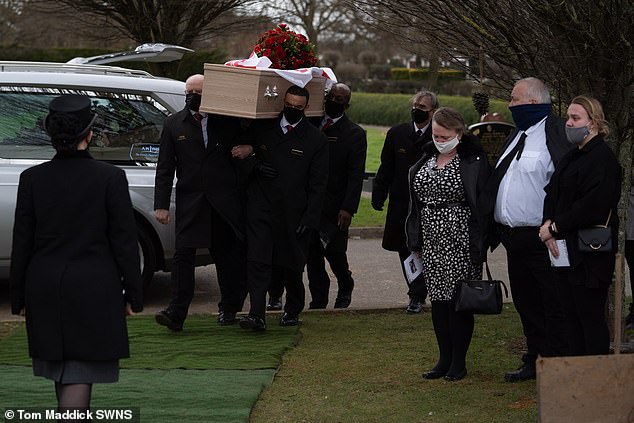 A coffin was carried past mourners yesterday during the double burial. Sarah paid tribute to the couple, describing them as the “perfect one-two punch” and the “best parent one could ever wish for”. 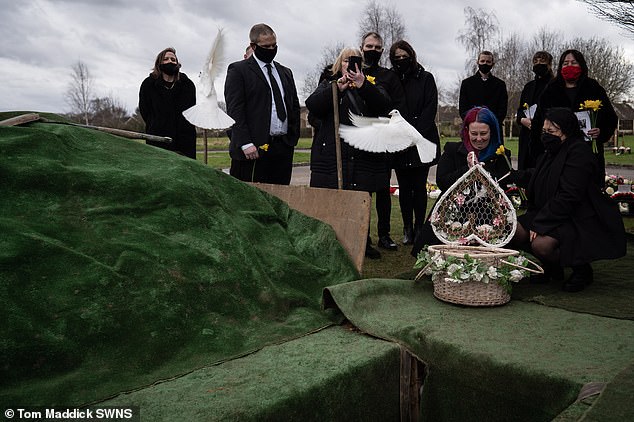 Two pigeons are released during the joint ceremony in the cemetery. Sarah said the turnout at the double burial would have been much greater had it not been for the pandemic

“It was such a shock, I fully expected to help her plan my father’s funeral, but I never expected to bury my mother too.”

Sarah then faced the “toughest conversation” of her life when she had to tell her father that his wife had died.

She said, “I said to him,” If you want to go with her, you have mine and my sisters’ blessings because I know that you cannot bear to be without them. “

Peter stayed alive ten days and had his birthday in the hospital before Sarah was invited to sit by his bed.

Sarah added, “It was his birthday on January 27th, we called him and the doctors sang him happy birthday.

“He was taken to the cancer ward and I sat with him for three days, talking to him, singing to him, and doing the things you have to do. 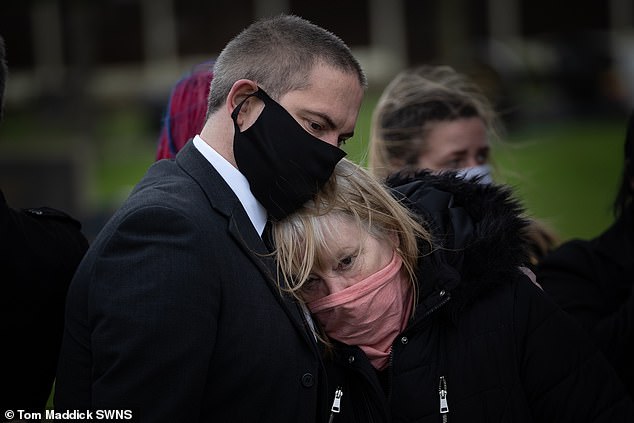 Two mourners are pictured during the ceremony. Peter and Audrey, who had three children, lived on the same street as teenagers and became a couple 50 years ago 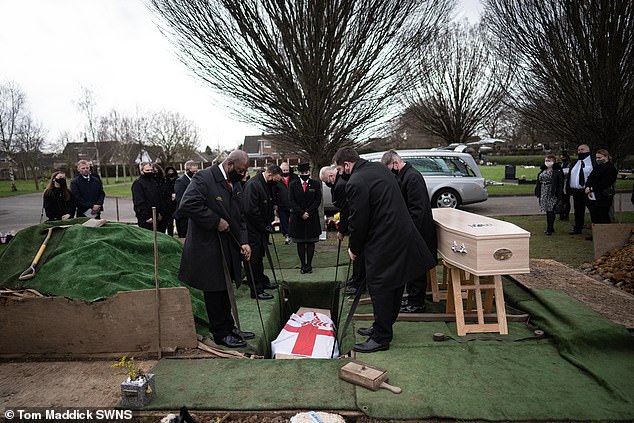 A coffin is lowered into the ground during yesterday’s double burial. Peter’s birthday was at the hospital before Sarah was invited to sit by his bed 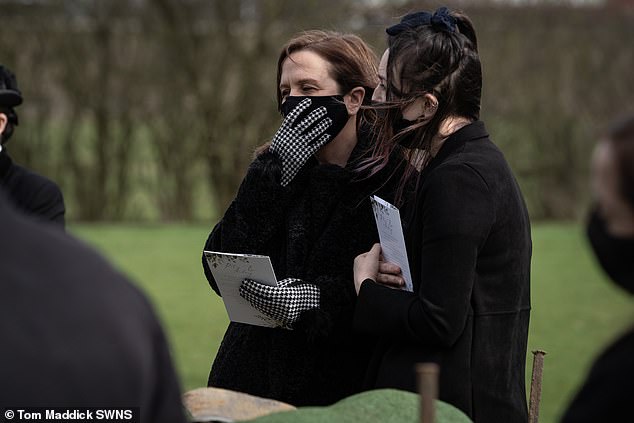 Mourners pictured during the funeral yesterday. Due to Covid restrictions, only 30 mourners were allowed to show their respects at the joint ceremony

Peter and Audrey, who had three children, five grandchildren, and two great-grandchildren, lived on the same street as teenagers and became a couple 50 years ago.

Sarah paid tribute to the couple, describing them as the “perfect one-two punch” and the “best parent one could ever wish for”.

Only 30 mourners were allowed to show their respects at the double burial due to Covid restrictions, but Sarah said the turnout would have been much greater without the pandemic.

She added: “Mom was the stricter, she would tell us if we were naughty.

‘Papa was much calmer and more relaxed, my father never betrayed me. They were so loving and in love, they were just perfect parents.

“We don’t really know how they met, but they went to the same school and lived on the same street, but dad was four years older. They got together when my mother was 17.

“My father always told me his wishes, he wanted to be buried under a tree in a cemetery just five minutes away from me so that I could visit him.

“So I granted his wishes so I know that he would be happy and that they are together, which is the main thing.

“I can imagine them laughing together – my dad would make them hold out longer than they did, and my mom would be angry that he kept them waiting.”

The best hotels with self catering cottages from Cornwall to Cumbria