One of Italy’s most feared mob bosses, who ruled the Neapolitan Camorra from a prison cell for most of his life, has died.

Raffaele ‘the Professor’ Cutolo, 79, was found dead on a prison bed in Parma on Wednesday morning after spending the last 42 years of his life behind bars.

From prison he founded the headquarters of the ‘New Camorra’ in the 1970s and organized a bloody war against the Sicilian Cosa Nostra in the 1980s.

He commanded a legion of 10,000 men who smuggled cocaine and operated protective thugs in Naples, fathered a child through artificial insemination, and inspired a 1986 film with Ben Gazzara while serving several life sentences.

The Campania farm boy was even sitting at the table with top politicians when he was asked to negotiate the release of the President of Campania, Ciro Cirillo, who was kidnapped in 1981 by the Red Brigades, a communist guerrilla faction.

Raffaele Cutolo appears in court in 1983, surrounded by prison guards. The book was thrown at the professor that year when the bloody war with the Sicilian Mafia came to an end in Naples 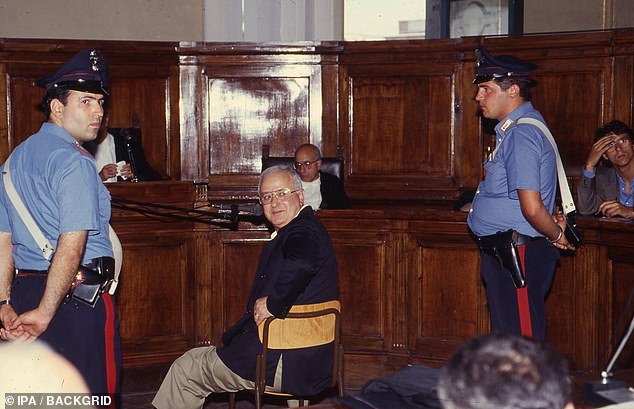 Cutolo, also known as the Prince and the Monk, looks back on his followers during a court appearance in 1997 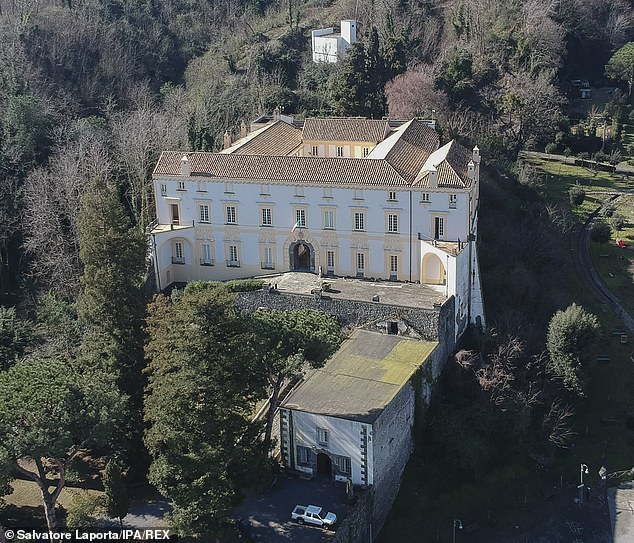 In 1980 he bought a mansion, the Medici Castle of Ottaviano, a former noble house, for 270 million lire (around 500,000 pounds in today’s money). The castle was later confiscated from him when his influence waned in the 1990s and its majestic halls have since fallen into disrepair. It’s not clear if Cutolo ever set foot inside the building, which has been locked in continuously since 1979. 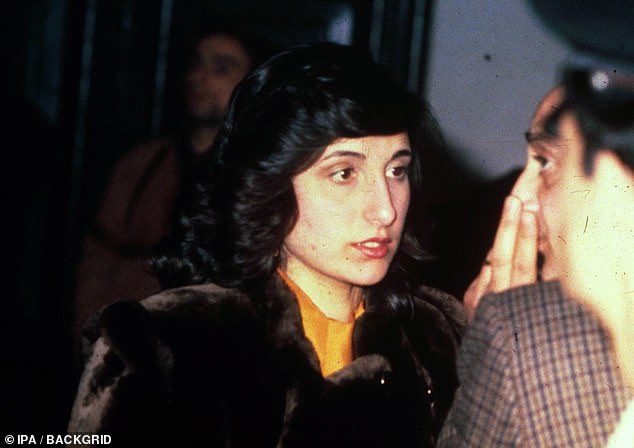 He married his wife Immaculate Iacone in 1983 (picture 1986) and in 2007, after a lengthy litigation through artificial insemination, he was able to have a daughter with her

“Cutolo was a piece of the Italian state,” said Gomorrah writer and author Roberto Saviano. “He was very powerful, more than a prime minister.”

He was taken to the Poggioreale prison in Naples, infamous for its torture chamber, where he was challenged by Camorra don Antonio ‘the Badman’ Spavone at the beginning of his 24-year stay.

The young Cutolo asked Spavone to arm himself with a flick knife and meet him in the courtyard.

But the boss never showed it and from that day on, Cutolo was feared throughout the prison.

A few days after Spavone was released, a killer believed to have worked for Cutolo fired a shotgun at his face.

Spavone survived but had plastic surgery after clumps of his face were blown off and immediately withdrew from his role as head of the Camorra. 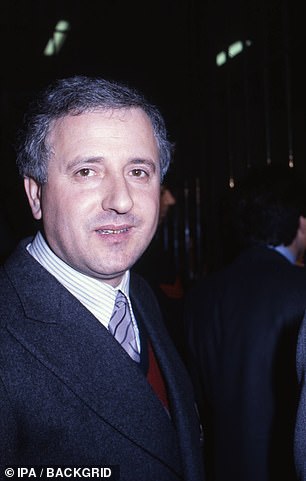 Catulo was worshiped by his men, who called him the Prince (‘o Princepe) and the Gospel (‘ o Vangelo), and inmates kissed his hand as if he were the Pope

In the 1970s Cutolo had founded the “New Camorra Organization” with a group of capos around him who were to forge criminal enterprises and serve their commander on his release from prison.

He lived in luxury, with a cell all to himself, he was allowed to use the governor’s phone to call anywhere in the world, and his cook and accountant lived in the next room.

It is even rumored that he once slapped the governor of the Poggioreale in the face for daring to search his cell.

The Don befriended younger prisoners and offered them protection, belonging, and worth, which added to his ever-growing network.

Their loyalty was so great that they sent money hidden in bouquets of flowers and Catulo used the money inside to gain more influence.

For example, he would offer to buy food for poorer prisoners, thereby creating “debts” which he would then compensate – often with blood – when they were released.

The Don established a unique ideology that some have even referred to as the “cult of death”, arguing that “the value of life is not its length but its use”. 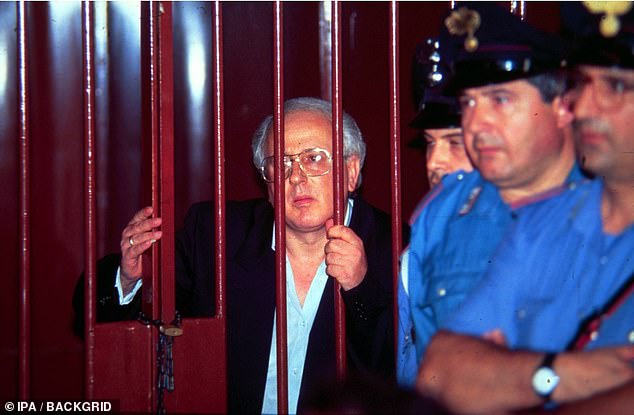 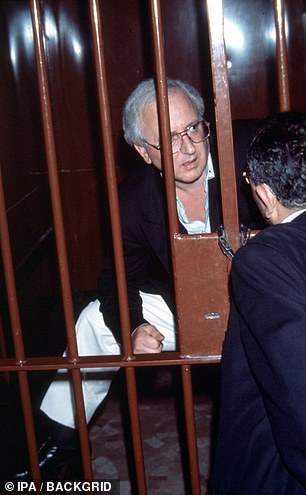 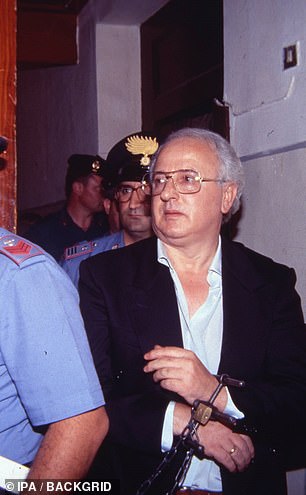 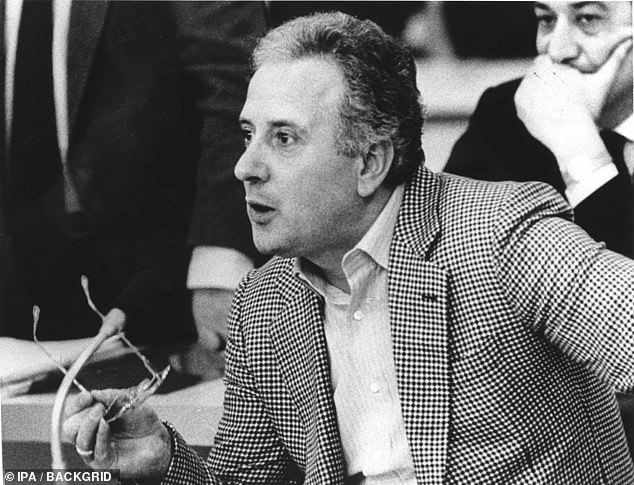 Catulo fought his case in court in 1986. He received several life sentences for the hits he ordered in the bloody early 1980s 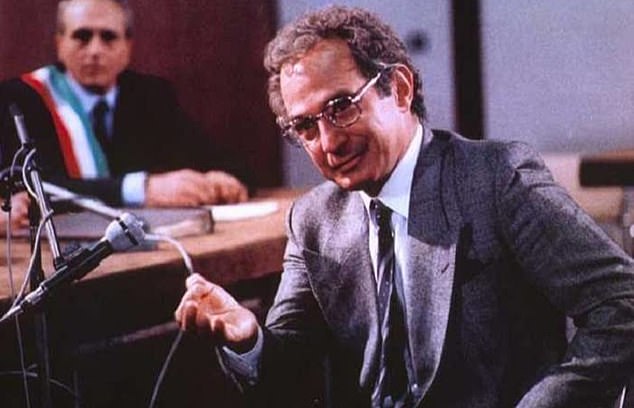 He wrote a book called Poesie e pensieri (Thoughts and Poems) which was widely used throughout Campania and was known as the “Sergeant’s Bible”.

Behind bars, his writings and interviews with journalists nurtured a person whom his henchmen adored on the streets of Naples. 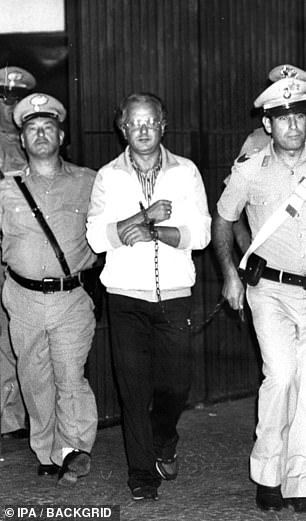 In 1986 Catulo was chained by the police in front of a courthouse. He died in Parma on Wednesday at the age of 79

They called him the Prince (o Princepe) and the Gospel (o Vangelo), and the inmates kissed his hand as if he were the Pope.

Cutulo even invented an initiation ritual that contained the sentence: “The day on which the people of Campania understand that it is better to eat a slice of bread as a free man than to eat a steak as a slave is the day on which Campania will win. “

In the rural villages of Campania, Cutolo – a farm boy himself – met the unemployed youth who struggled to find work when Italy’s economy stalled.

The Italian Ministry of Justice estimates that Cutolo was assisted by 10,000 men in 1980.

It was then that he started his gruesome internal war in the Camorra that claimed the lives of hundreds of gangsters and dozens of innocent people.

In Naples there were two distinct branches of Camorra: Cutolo’s non-commissioned officer, who mainly dealt with cocaine and protective rackets, and the rival clans who sold heroin and cigarettes, some of which had alliances with the Sicilian Cosa Nostra.

It was the latter connection that would spell disaster for Cutolo.

The sergeant’s violence and ruthlessness was overwhelming for the smaller Camorra clans, who couldn’t resist when Cutolo’s mob demanded a “sales tax”.

In the late 1970s, these smaller clans merged to form the Nuova Famiglia, which was closely linked to the Cosa Nostra.

The following war, which ran from 1980 to 1983, was so bloody that the police were forced to intervene in Mafioso’s affairs.

However, the Cosa Nostra were able to use their pervasive influence to ensure that when the dust settled, non-commissioned officers were rounded up and arrested. 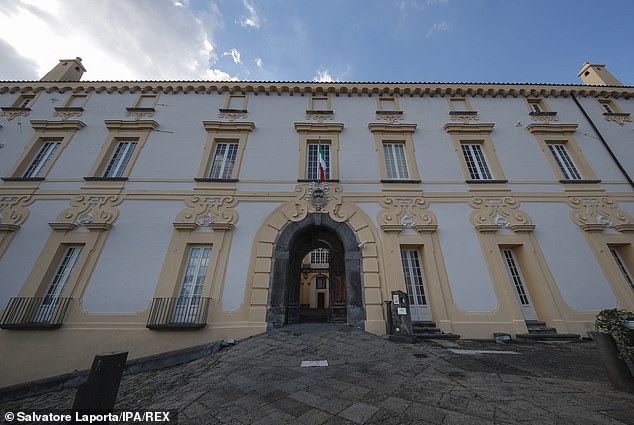 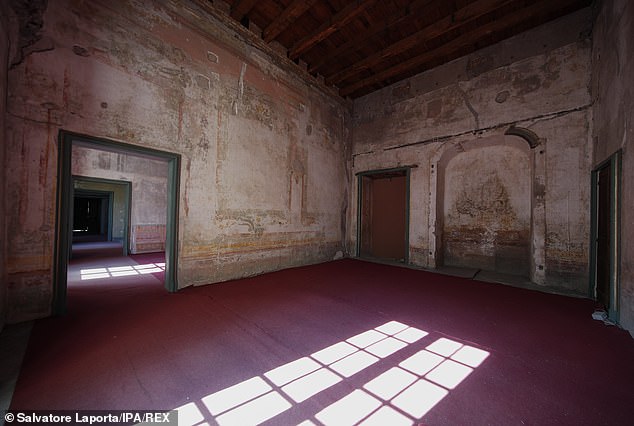 The beheaded inside of his castle. It’s not clear if he ever set foot in it 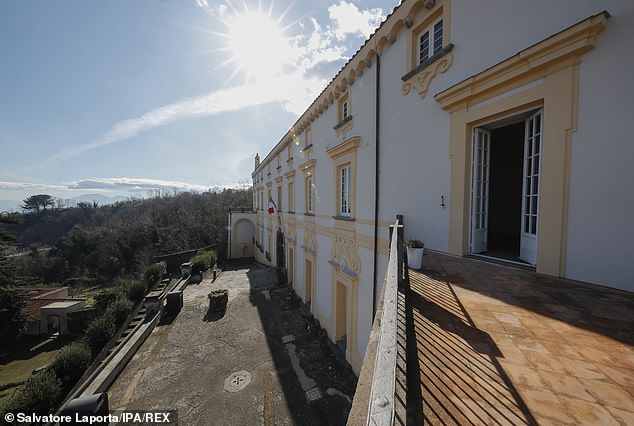 The Medici Castle of Ottaviano, which the mob boss owned for about a decade – while he was in prison 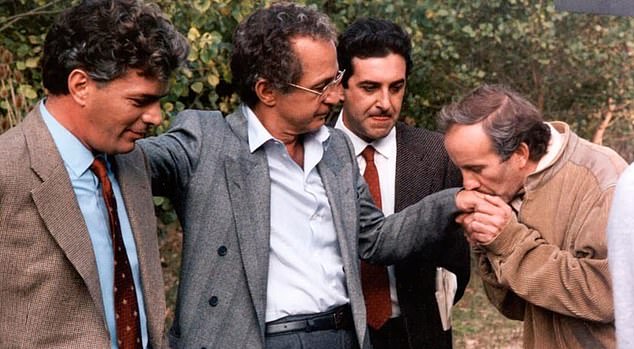 Ben Gazzara appears in the 1986 film as Catulo

Cutolo reportedly dubbed his hand in taking over Cosa Nostra and his former political allies have turned against him.

When his chief military general, Vincenzo ‘the Big Black’ Casillo, was shot dead in 1983, it marked the beginning of Catulo’s decline.

Many left the sergeant to join the ranks of his enemies, and his sister, who ran the sergeant from outside the prison, was arrested in 1993.

Cutolo was taken to a prison on the island of Asinara far from Naples and could no longer communicate with the outside world.

He married his wife Immaculate Iacone in 1983 and was able to have a daughter with her through artificial insemination in 2007 after a lengthy legal battle.

“I will die in prison. My last wish is to have a child for my wife, ”Cutolo told the La Repubblica newspaper.

He had fathered another child, Roberto, from a previous marriage.

The murderers were later discovered dead themselves, their faces torn by bullets. 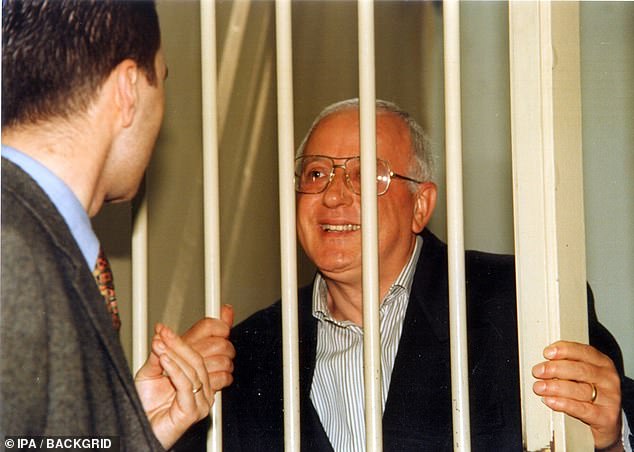 Last year he fought another legal battle, arguing that he should be released because of his illness and spend his final days under house arrest. The state refused, arguing that Cutolo was still a powerful symbol that would strengthen criminal gangs who still pay homage to the Don and the sergeant (pictured 1997). 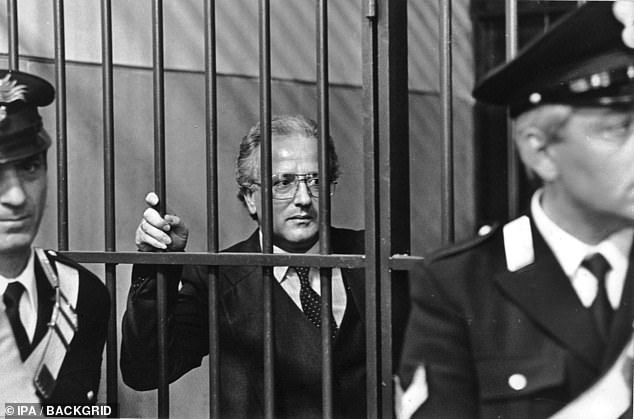 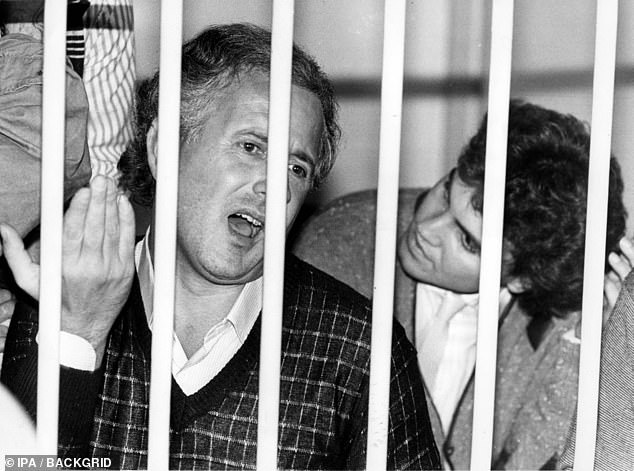 The castle was later confiscated from him when his influence waned in the 1990s and its majestic halls have since fallen into disrepair.

It’s not clear if Cutolo ever set foot inside the building, which has been locked in continuously since 1979.

Last year he fought another legal battle, arguing that he should be released because of his illness and spend his final days under house arrest.

The state refused, arguing that Cutolo was still a powerful symbol that would strengthen criminal gangs who still pay homage to the Don and the sergeant.

This week when he suffered from pneumonia, his condition worsened and he was reportedly suffering from septicemia.

His lawyers had issued new legal statements for his release on Tuesday, but he died the following day.

Hakim Ziyech “is currently suffering” from the quality of Chelsea, says Thomas Tuchel