The £ 100M Couple: How Harry and Meghan Amassed Fortunes

Prince Harry and Meghan Markle’s nine-bedroom mansion in the exclusive Montecito, California neighborhood has tripled just nine months after buying it for £ 10 million.

According to a local real estate agent, the real estate market in Montecito has gone “crazy” since the summer, meaning the value of Harry and Meghan’s house may have tripled.

It cost the couple $ 14.65 million (about £ 10 million) but could now be worth up to £ 30 million, which led Sandy Stahl, an agent at Sotheby’s International Realty, to say that Harry and Meghan’s move ” were really smart, “the Times reported.

Last year, Prince Harry and Meghan Markle bought their nine-bedroom, 16-bathroom mansion in upscale Montecito, California on a $ 9.6 million mortgage. According to a local real estate agent, the real estate market in Montecito has gone “crazy” since the summer, meaning the value of Harry and Meghan’s house may have tripled 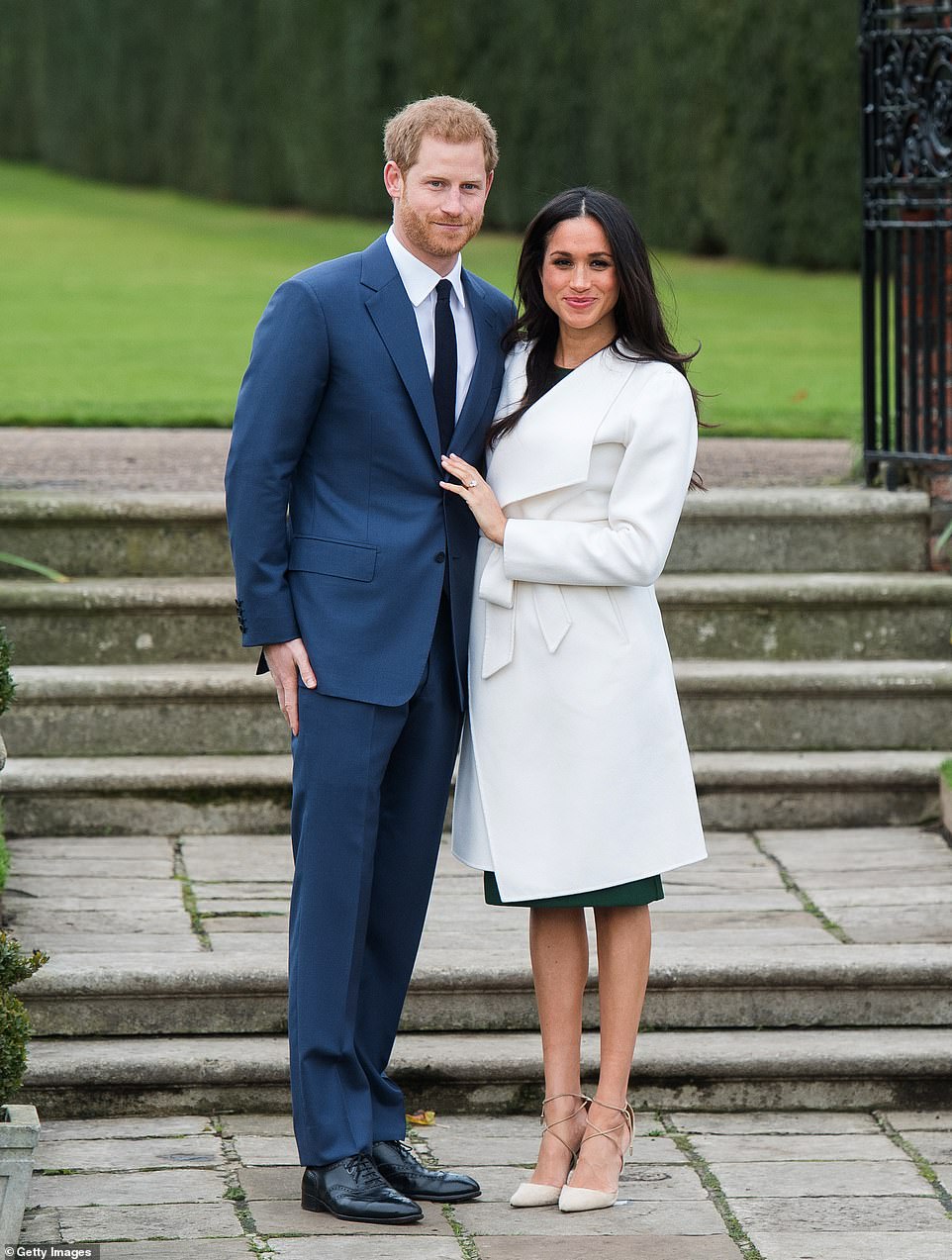 Real estate agent Randy Solakian knows Harry and Meghan’s house well because he represented the couple who built it when it was sold to previous owner Sergey Grishin, a Russian businessman.

In addition to the nine bedrooms, the house has a fitness room, a spa, a cinema, a separate guest house, a tennis court and a swimming pool.

Solakian pointed out to The Times how the house might have tripled in value: “It would have been really ugly if they’d paid $ 40 million [£30 million] for what it’s probably worth but i would say they got a bargain.

And real estate agent Stahl told the newspaper that while the explosion in the Montecito property market was not due to the arrival of Harry and Meghan, they made a “smart move”.

Claiming the house sold for “at least twice” what they paid for, she noted that a house near Harry and Meghan was on the market for $ 21 million and wasn’t “nearly as beautiful.”

The house is said to have previously belonged to actor Rob Lowe. It has seven bedrooms, 13 bathrooms, a pool and a separate guest house.

The Duke of Sussex said in his bombshell interview with Oprah Winfrey that his family literally cut me off financially after he and his wife Meghan Markle decided to move to the United States.

But when Harry’s legacy from his mother and great-grandmother and the lucrative contracts he and Meghan signed with Netflix and Spotify are factored in, their net worth is believed to be around £ 100 million.

Harry, 36, and his brother William inherited £ 21 million from their mother Diana. The money was held in trust until she was 25.

Harry also received a smaller number from the Queen Mother’s will after she died in 2002, and estimated his total inheritance to be an estimated £ 23 million, the Times estimates. 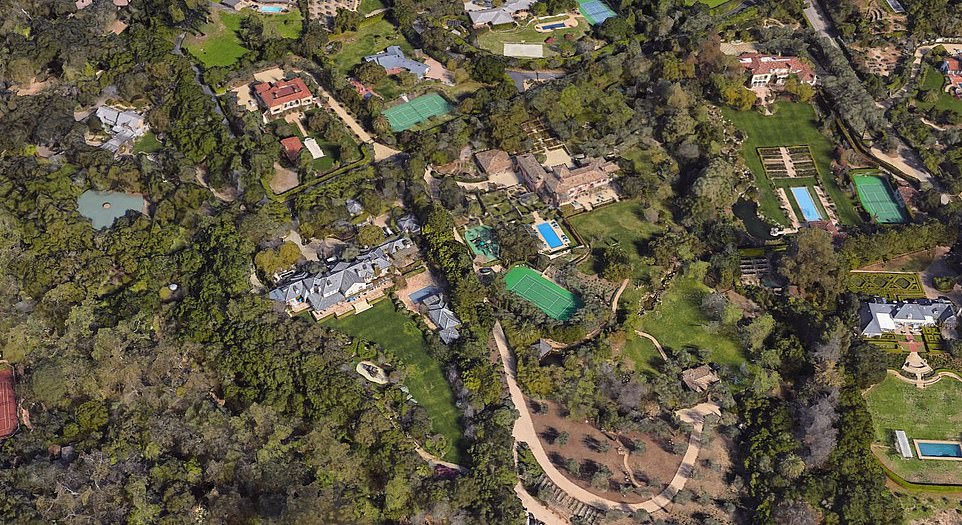 Real estate agent Randy Solakian Solakian told The Times, “It would have been really ugly if they paid $ 40 million [£30 million] for what it’s probably worth but I would say they got a bargain ‘ 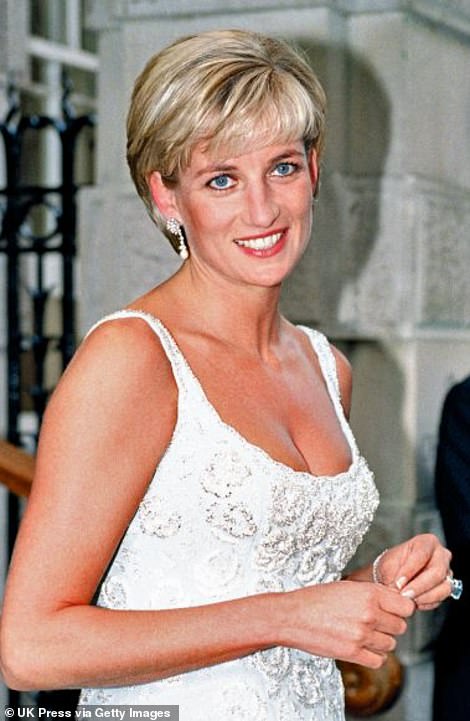 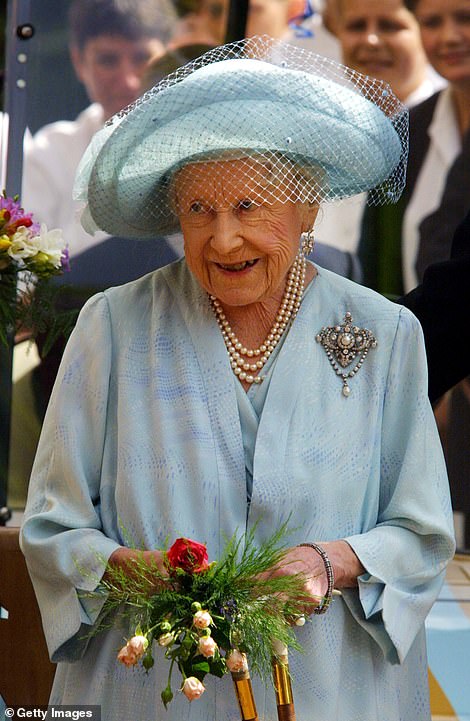 When Harry’s legacy from his mother Diana (left) and great-grandmother, the Queen Mother (right, 2001), and the lucrative contracts he and Meghan signed with Netflix and Spotify are taken into account, their net worth is believed to be around £ 100 million lies 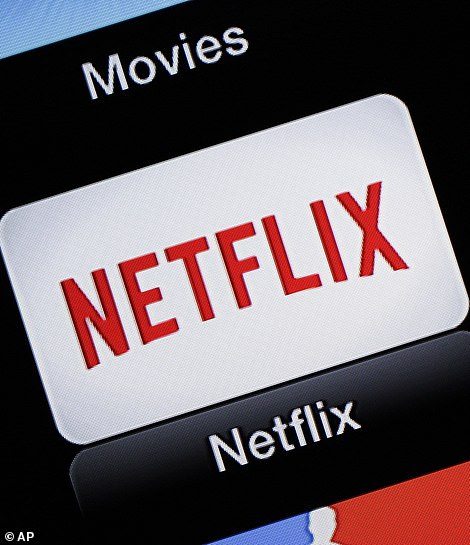 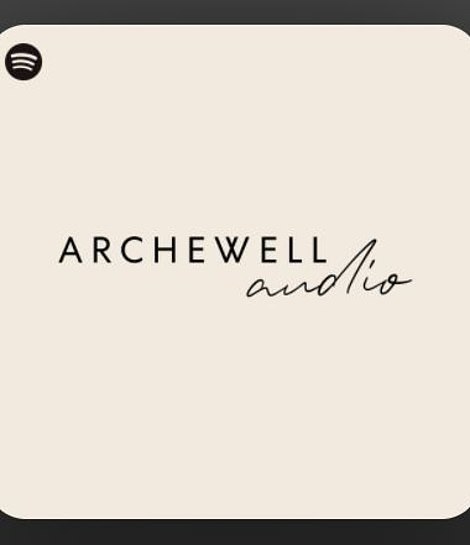 He and Meghan are said to have been looking for a £ 71m deal when they signed their deal with Netflix last year. They also signed a contract with Spotify to create podcasts under the banner of their Archewell Foundation. It’s said to be worth £ 18 million

He and Meghan reportedly sought a £ 71 million deal when they signed their series, movie and TV show production with Netflix last year.

They also signed a contract with Spotify to create podcasts under the banner of their Archewell Foundation. It’s said to be worth £ 18 million.

Harry and Meghan’s Archewell Foundation was formed last year with the expectation that it would advocate on issues the couple previously focused on, including racial justice, gender equality, climate change, and mental health.

Her first Spotify podcast, in which Archie made his broadcast debut, was released last December.

That same month, 39-year-old Meghan announced that she had invested in Clevr Blends, which makes instant oat milk latte.

Harry and Meghan’s popularity is falling after the Oprah interview

It comes after a new poll showed Prince Harry and Meghan’s popularity ratings have fallen to their lowest levels since their bombshell interview.

Meghan’s popularity has also dropped 13 points in the past 10 days, figures from the survey show.

In a token of unwavering support, the British continue to show the Queen the most. According to the survey, four out of five people (80 percent) like them.

According to the survey, Prince William and his wife Kate are also still very popular. About three quarters of the British give them positive reviews.

According to the survey, Prince Andrew remains by far the most unpopular king with a negative rating of 82 percent.

Meghan’s total net worth is said to be around £ 4 million. When she starred as an actress in the US drama Suits, she received £ 2 million over six years.

The Duchess also made six-figure sums for film roles and owns a property in Toronto.

When their net worth and lucrative businesses are factored in, Harry and Meghan’s net worth is estimated at around £ 96 million.

In their bombshell interview with Oprah, Harry and Meghan touched their new life in California. The Duchess said the step was “bigger than any fairy tale you’ve ever read”.

She said she and Harry wanted to “live authentically” and “go back to basics” when she showed the chickens the couple rescued from a factory farm.

Despite the growth in their fortunes, Harry and Meghan’s fortunes still pale in comparison to one of their neighbors – Miss Winfrey herself, who lives a five-minute drive away.

However, Harry and Meghan are reportedly rarely seen in Montecito. The only place they’ve been seen together is at Lucky’s, a steakhouse.

When asked about his suspicious partnerships with Netflix and Spotify, Harry told Miss Winfrey that they were “never part of the plan” but were suggested by a “friend” if they were concerned about financial problems.

He insisted, “My family literally cut me off financially and I had to afford security.

“But I have what my mother left me and we couldn’t have done it without that.”

He added of Diana, “I think she saw it coming. And I felt their presence throughout the process. ‘

However, informed sources say that Harry received a lump sum from his father Prince Charles in late March 2020 after he and Meghan announced their decision to step down from their roles as working royals.

The source told the Daily Mail that the sum was “many hundreds of thousands of pounds”.

This should be money to hold them for the coming year until they fix themselves, the source added. 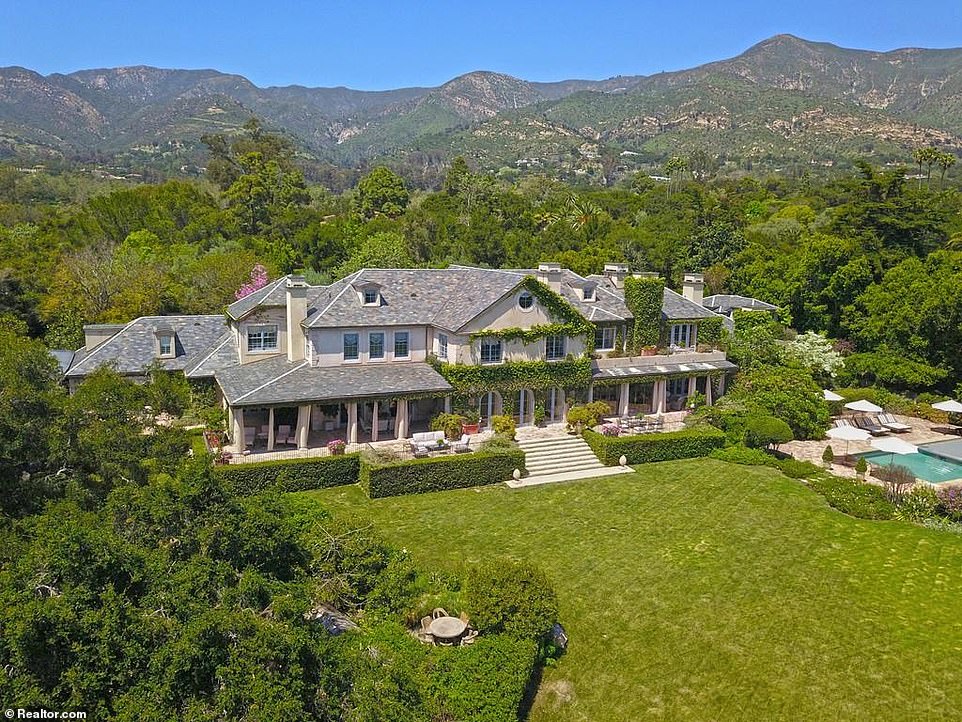 A house near Harry and Meghna’s estate that once belonged to actor Rob Lowe recently went on sale for $ 21 million (pounds 15 million). 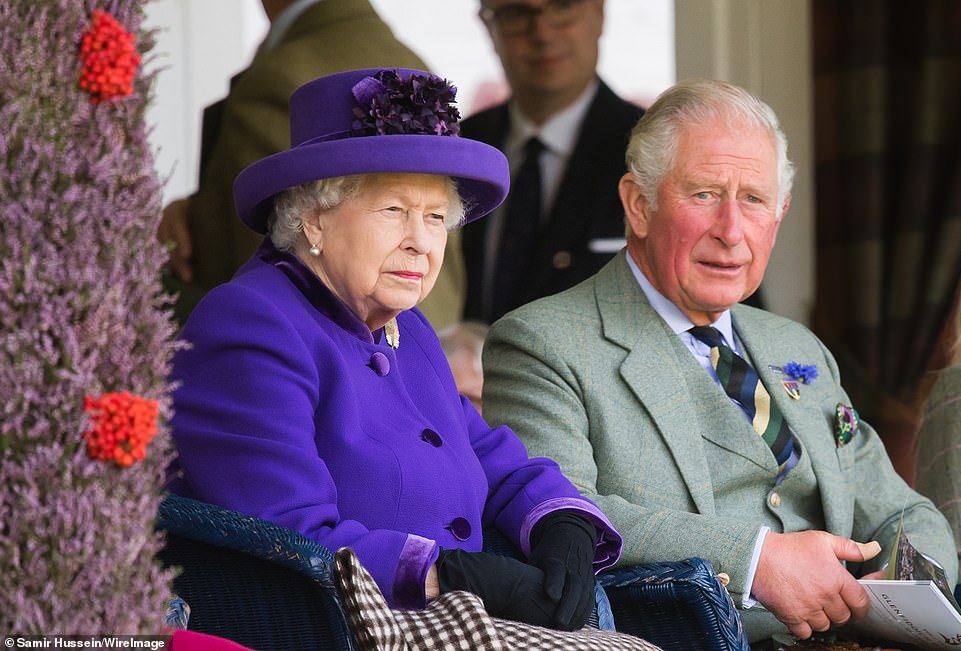 The couple is said to have been told that more resources would be available if they needed them in the next fiscal year.

However, Harry and Meghan’s decision to buy their huge house means they need to earn more.

Prince Philip starts his fourth weekend in the hospital

Prince Philip has started his fourth weekend in the hospital and has now been separated from the Queen for 25 days.

Philip – whose 100th birthday is June 10 – underwent heart surgery earlier this month after being admitted as a “precaution” on February 16 when he felt unwell.

He was operated on at St. Bartholomew’s Hospital in Smithfield, London, but has since been returned to the private King Edward VII Hospital in the capital for further recovery.

The Duke of Edinburgh, who has been married to the Queen for 73 years, was treated for an infection before being transferred to St Bartholomew’s – Britain’s premier heart hospital – on March 1.

Buckingham Palace has announced that it will not make an “ongoing comment” on its condition.

The last update on the Duke’s condition came from Buckingham Palace when he was brought back to King Edward VII last Friday on Friday.

On this point, an aide from the Daily Mail told the Daily Mail, “Nobody told Harry he had to spend £ 11 million on a 16-bathroom mansion. That was his choice. ‘

The most explosive allegations in her interview with Miss Winfrey were the allegations that at least one member of the royal family had raised concerns about how dark their unborn baby’s skin might be.

Harry and Meghan refused to say which family member made the comment, but they later made it clear to Miss Winfrey that it wasn’t the Queen or the Duke of Edinburgh who made the comment.

Meghan also revealed she had suicidal thoughts and said, “I just didn’t want to be alive anymore.”

She said she asked for help and asked to go somewhere for help and reached out to one of the oldest people in the facility, but was told it wouldn’t look good.

The Duchess said, “I said I had to go somewhere for help. I said that I’ve never felt this way before and that I have to go somewhere. And I was told that I couldn’t, that it wasn’t good for the institution. ‘

Meghan also suggested that she and Harry wanted Archie to be a prince so that he would be safe and protected.

Archie, who is in seventh place on the throne, is not eligible to be HRH or Prince due to the rules established by King George V more than 100 years ago.

He will be eligible to be an HRH or a prince when the Prince of Wales takes the throne.

It comes as the Queen and Prince Charles backed Prince William this week after he insisted the Royals were “not a racist family”.

William became the first Senior Windsor on Thursday to go directly into the allegations Harry and Meghan made in their explosive Oprah interview. 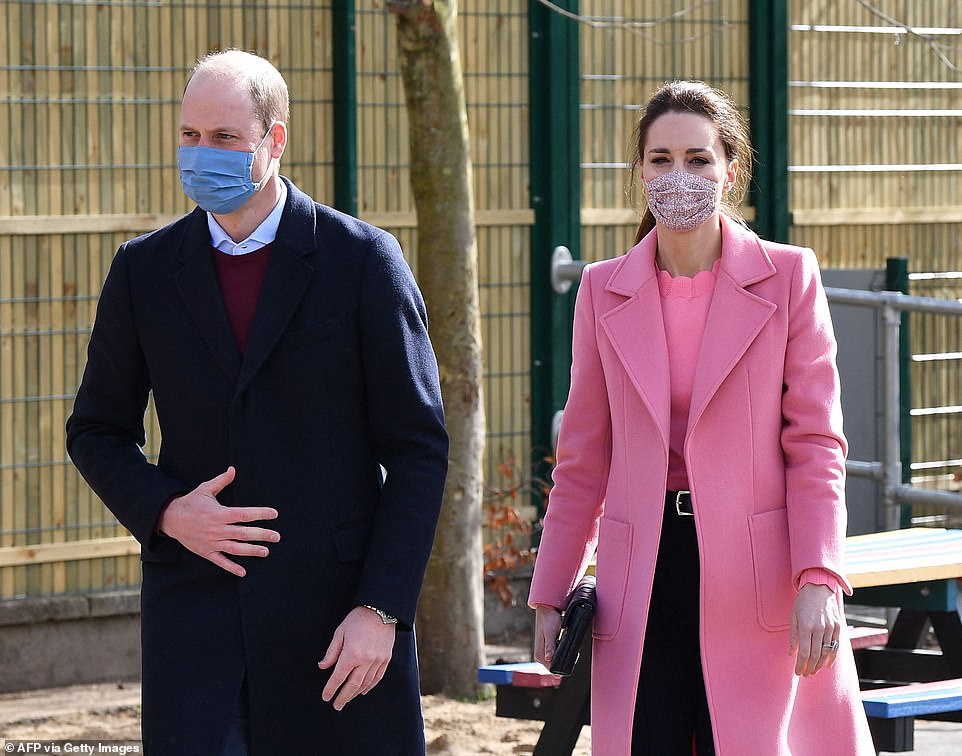 It comes as the Queen and Prince Charles backed Prince William this week after he insisted the Royals were “not a racist family”.

Buckingham Palace and Clarence House, the official homes of the Queen and Prince of Wales, are said to have supported Williams’ solo intervention.

The prince spoke when he and his wife Kate were attending a school in east London to support a youth mental health service.

Aides had originally insisted that the couple not answer questions about the interview as it would be “inappropriate” in a school setting.

His firm counterargument came after Buckingham Palace issued a statement on Tuesday on behalf of the Queen expressing the family’s sadness at learning how difficult Harry and Meghan have been in recent years.

The statement said that the issues they raised, particularly those of race, were very “worrying”.

But it made it clear that the Queen and other high-ranking kings were eager to assert themselves, adding, “Although some memories may vary, they are taken very seriously and addressed privately by the family.”