New research has shown that more pothole claims are made in March than any other month.

Around 13 percent of all claims to cover repair costs for damage to vehicles caused by craters on the road are made by motorists in the third month of the year.

According to Admiral, the number of claims for damages for vehicles caused by potholes has also increased by almost 30 percent since 2016.

Problem potholes: Pothole claims on motor insurance have increased – since 2016, increased by 30%

The insurer warns drivers to pay special attention on roads to avoid costly damage to their vehicles.

The recent freezing temperatures and icy weather are likely to result in more potholes in the streets. It should be noted that after the Beast from the East in 2018, there was a surge in pothole-related claims.

A pothole occurs when water penetrates existing small cracks on the road surface and freezes and expands in cold weather.

The frozen water then evaporates in warmer weather, creating gaps in the surface that are destroyed by the passing traffic.

The damage can be significant. The average repair bill for pothole damage rose by more than 55 percent last year compared to 2016.

Despite lockdown restrictions in place across the UK for much of 2020, pothole damage rose 20 percent last year from 2019. This shows the persistent and increasing problems potholes are causing on main roads across the UK.

Driving over a deep pothole, even at low speeds, can damage the tires, alloy wheels, steering alignment, tracking, balancing and suspension of a vehicle.

If the steering is badly damaged, it can also be difficult for the driver to control the vehicle, which can increase the risk of an accident.

As newer vehicles are equipped with more advanced technology to detect a problem with the vehicle, repair costs if damaged become more expensive.

In England, the government has set up a special pothole action fund to repair or prevent potholes on local routes.

The funds will be allocated according to a formula and given to authorities in England outside of London.

In February 2021, the Department of Transportation made £ 500 million available to the councils through the fund for the years 2021 to 2022.

That £ half billion, however, was part of a cut in overall road maintenance budget spending that left councils missing the £ 375 million promised by ministers.

The DfT told This is Money that a spending review conducted on November 25, 2020 “rightly prioritized the response to Covid-19, helping jobs and helping families during this incredibly difficult time,” and therefore allocated local funds for road maintenance had been cut.

Lorna Connelly, Claims Director at Admiral, said, “Our data shows that potholes continue to cause problems for many motorists on UK roads and the cost of repairs increases significantly as vehicles advance.

“Not only can pothole damage be dangerous and costly, it can also be difficult to get compensation from the road authorities.

“If your car is damaged by a pothole on a UK road, you may not be eligible for your insurance unless you have full coverage.

“To see if you can claim compensation for the damage, you need to find out who is responsible for the maintenance of the road on which the incident occurred and you need to gather as much information as possible.

“If you have an important journey to make, stay vigilant and look out for potholes that may have formed in the road.” 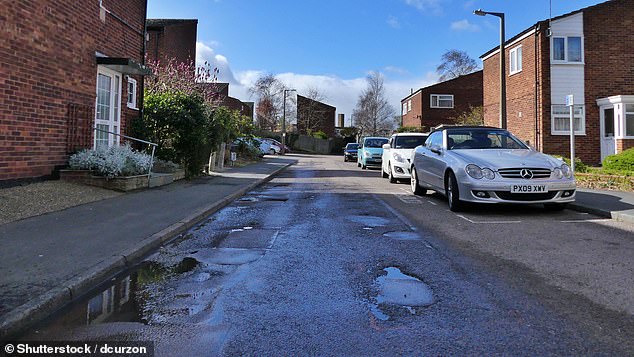 If you’ve driven over a pothole that damaged your car, be sure to take pictures of it

How to get compensation for pothole damage

While there is no guarantee that drivers will be able to claim money back if their car is damaged, there are several ways to make a claim for pothole damage:

1. Gather your evidence: Make a note of the location of the pothole, the time and date you hit it, and get a photo when it is safe to do so.

Then take your car to a garage for the damage assessed and get the mechanic’s report in writing as you will need it to clear your case.

Remember, your case is based on the evidence you collect from the person you are making a claim about. So collect as much information as you can.

2. Who is responsible? The next step is to find out who is maintaining the road, as different authorities are responsible for maintaining certain types of roads.

For example, local roads, B-roads and some minor A-roads are maintained by the local councils in England, Wales and Scotland.

If you believe the council is responsible, you have to prove they were negligent, which is difficult.

By requesting copies of freeway maintenance plans and incident reports within 14 days of the accident, you can provide evidence that either the freeway has not been properly maintained or a reported pothole problem has not been resolved.

It is important to have evidence to show that the incident would not have occurred had the council acted.

3. Reporting: Now you know who is responsible and you need to make a formal claim. Check whether the position in question has a template that you can fill out.

Include as much information as you can, including the mechanic’s report and repair cost, and any photos you took.

4. Do you have an offer? Is the Council’s offer acceptable, does it cover your costs? If not, go back to the council.

You have a right to fair compensation if the council or the Highways Agency has failed in their duty to keep the road in fair condition.

You also have a better chance of reaching an agreement if the pothole has already been reported and the council has not acted.

5. Offer rejected? If you think your lawsuit was wrongly dismissed, you can seek legal advice or bring a lawsuit in court.

However, this can be time consuming and is likely only worthwhile if the repair costs are significant.

6. Insurance claim: With full coverage, you can claim pothole damage through your insurance. However, it is worth considering the cost of the damage, as well as your overpayments, and checking if the entitlement affects your no-claims bonus.

Vacation in the Caribbean in just six weeks?