British manufacturer JCB has launched a new vehicle specially designed to remove potholes from our roads in record time.

The high-performance machine, known as the PotholePro, was unveiled ahead of National Pothole Day on Friday, although it has been tested in England for months.

According to JCB, it is the most efficient vehicle of its kind and has the repairability normally required by three separate machines. This means not only will it cut the cost and time of filling potholes, but it will also reduce the emissions impact normally associated with fixing them and help local authorities and road operators at a cost of £ 165,000 or £ 600 each Week are cheaper for renting.

The PotholePro has already been used in a trial in Stoke-on-Trent that filled a road crater in less than eight minutes, reducing repair times by 700 percent.

JCB’s Fast Pothole Filler: The UK excavator maker has released its newest model, the £ 165,000 PotholePro, which is designed to quickly repair the millions of potholes on our roads

The UK excavator maker says the machine will cut the cost of the current pothole fixture in half, which is used by councils and highway authorities across the country.

Its development was led by JCB Chairman Lord Bamford, who called potholes the “scourge of our nation” and is “personally” fixated on finding a solution to eradicate them.

“We just cannot allow potholes on our roads,” he said.

‘JCB’s solution is simple, inexpensive, and permanently repairs potholes the first time. Once the machine has done its job, all the contractor needs to do is add tar. ‘

The £ 165,000 vehicle’s wheelbase is compact enough that it can easily be operated on a single lane. Due to the high operator position, the person operating the machine can see all four wheels – this reduces the risk of passing pedestrians or other highways workers. 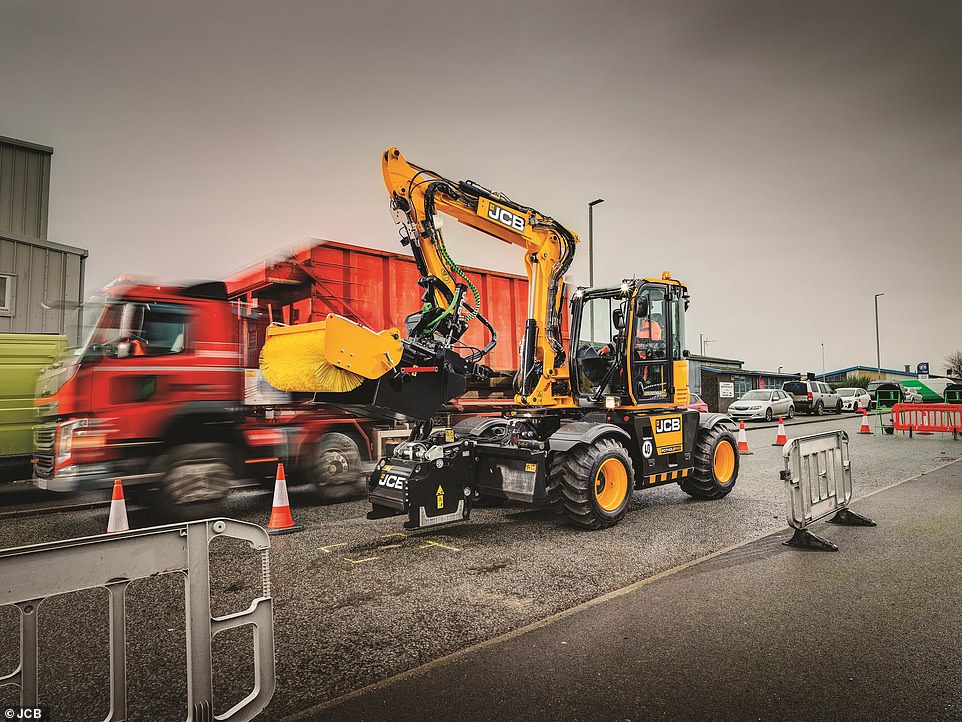 The PotholePro has been used in trials across Stoke-On-Trent for months and is rapidly speeding up the repair of crater roads. According to JCB, the rental by the authorities will cost around £ 600 per week 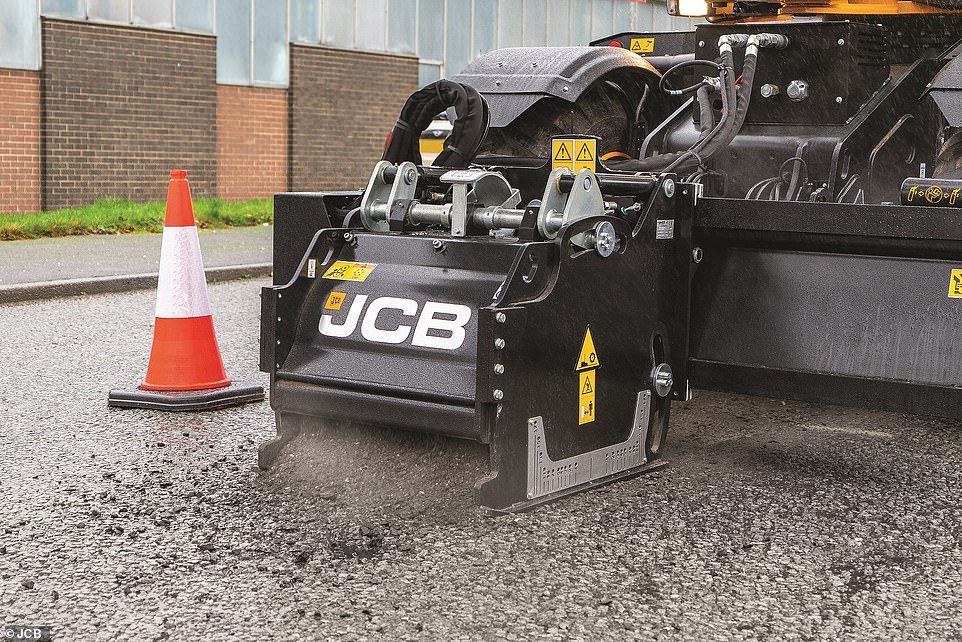 The single vehicle can do pothole repairs, which are usually done by three separate machines, according to the manufacturer 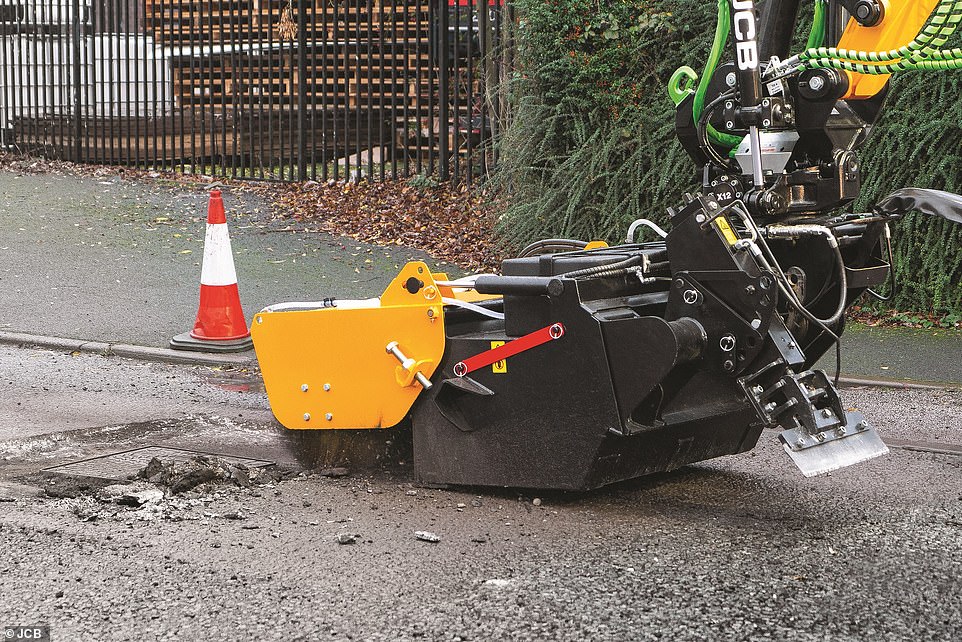 Equipping a vehicle with all of the attachments required for a complete pothole repair will reduce repair costs, time and emissions impact of using various machines, JCB said

The first part of the process uses the 600mm wide “planer” made up of rotating teeth that mill the ground to a depth specified by the operator. This creates a plane cut that gives the pothole structure. Without it, the repair wouldn’t take a month if you tried to get tar straight into the hole, road maintenance experts say.

The PotholePro’s multi-tool includes both the sweeper and the cutting tool. It can rotate in any direction, which makes it perfect for bypassing iron works.

The 360 ​​degree cropping tool cuts the edges of the pothole. Usually this operation is performed with a jackhammer or circular saw and has been linked to causing hand-arm vibration syndrome in those who operate it. With the JCB PotholePro, this risk is completely eliminated.

The next stage uses the sweeper, which can either rotate and collect the material, or the brush lifts out of the way to leave a bucket that can scoop up large quantities of splinters at once.

All of the collected material can then easily be dumped into an auxiliary truck for recycling. 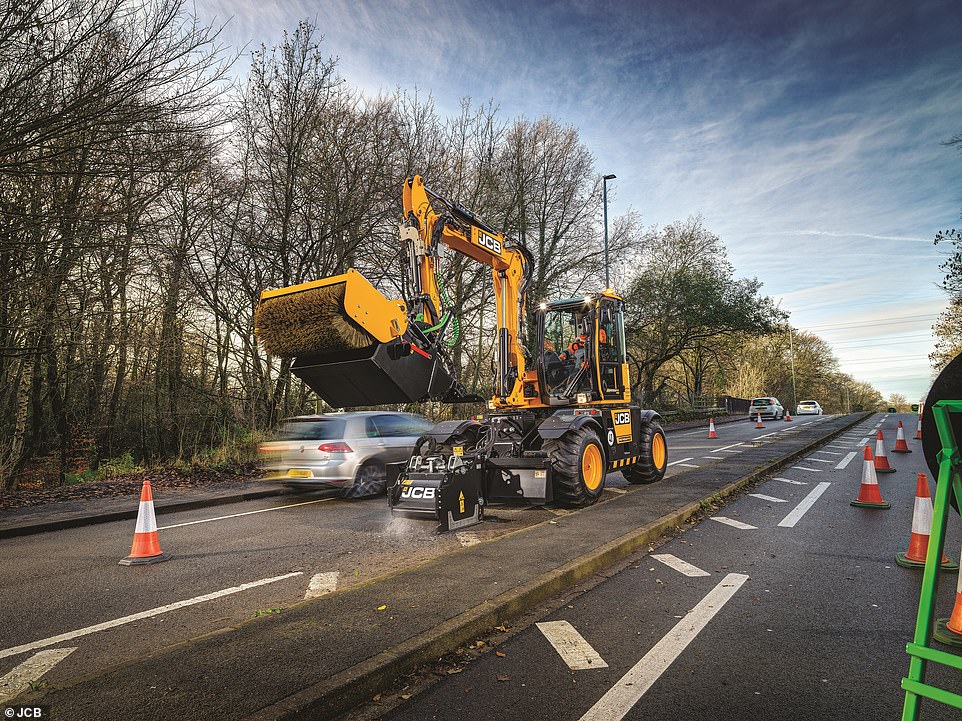 Step one: The “planer” is the first process in the repair. Rotating teeth cut the ground to a depth specified by the operator. The result is an even cut that gives the pothole structure 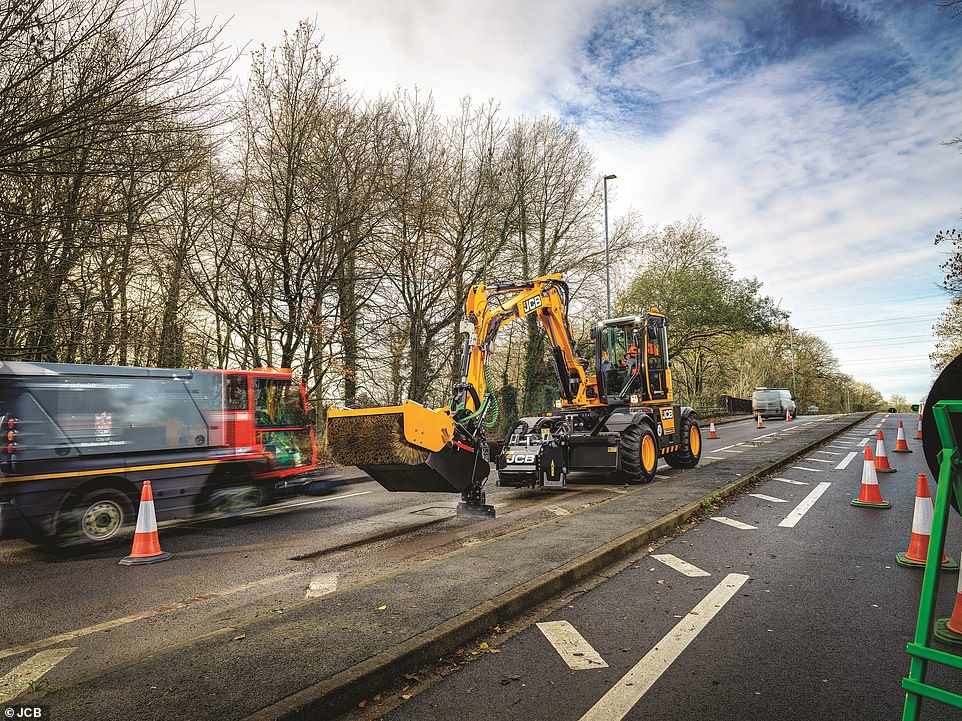 Step two: the 360 ​​degree cropping tool squares the edges of the pothole. Usually this operation is done with a jackhammer or circular saw, which leads to the development of hand-arm vibration syndrome in those who operate it. With the JCB PotholePro, this risk is completely eliminated 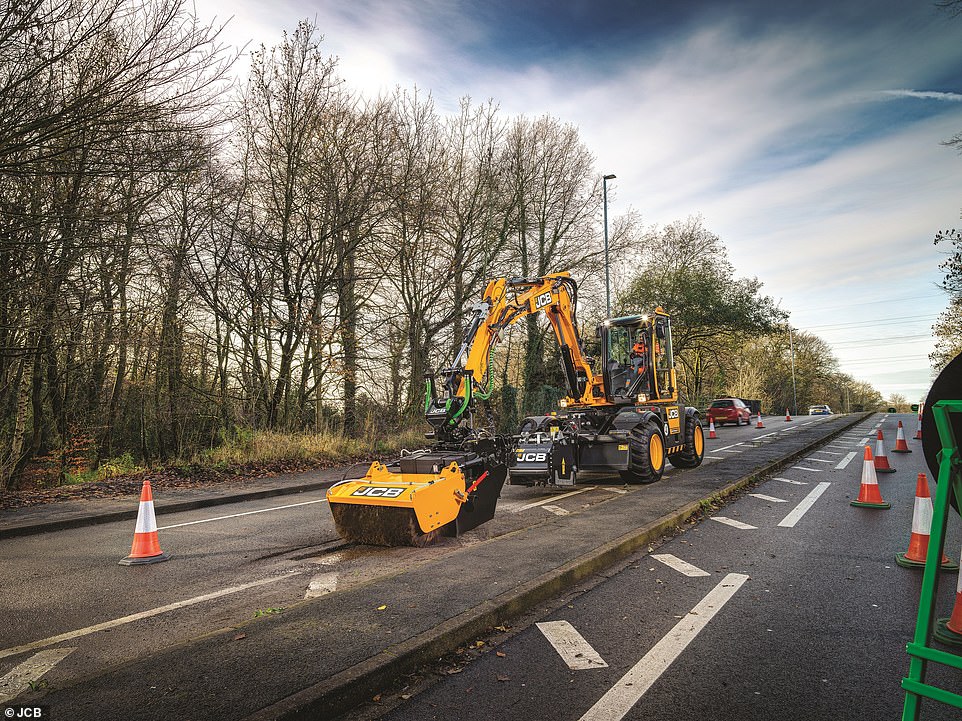 Step three: The next phase is using the sweeper which can either rotate and collect the material, or the brush lifts it out of the way to leave a bucket that can scoop up large amounts of splinters at once. All of the collected material can then easily be dumped into an auxiliary truck for recycling 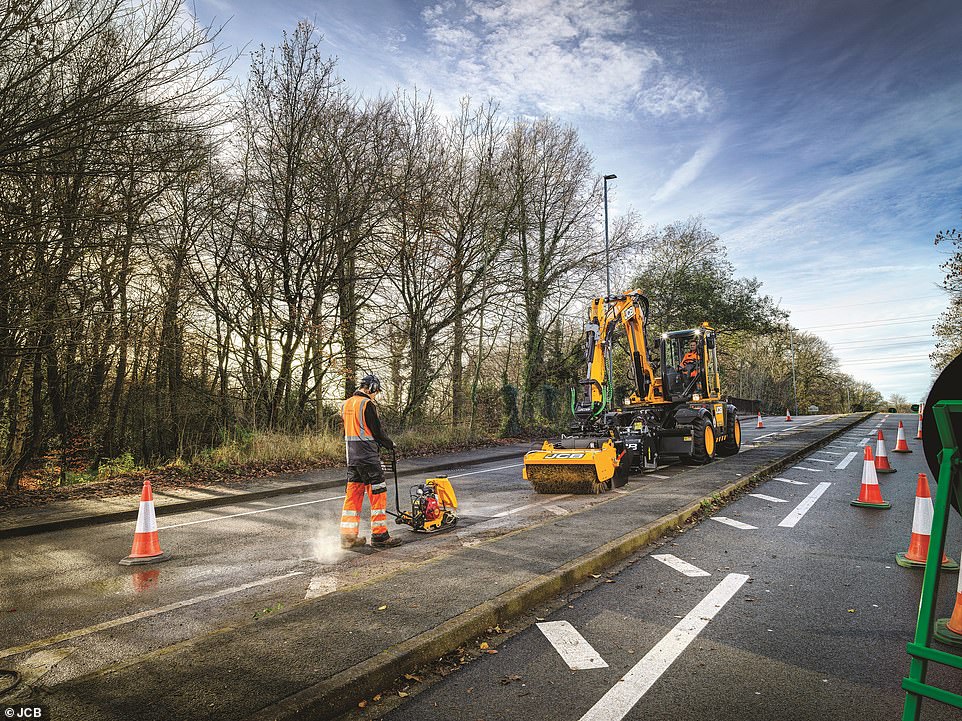 Step Four: Once the machine is done its job, all the contractor needs to do is add tar to remove the sign that a pothole is ever present

Tests with local authorities and contractors have already shown that the JCB PotholePro can repair potholes in less than eight minutes – the equivalent of repairing 700 potholes per month.

It also has a top speed of 40 km / h, which means the vehicle can go up and down on its own, which also reduces transportation costs for operators.

The machine has been used in road trials in Stoke-on-Trent for months. The city council has worked with JCB as an innovation partner on the development of the PotholePro for the past 12 months.

In its initial tests, the machine performed 51 road repairs in 20 days that normally would have taken a team of up to six people 63 days to complete.

The UK’s worst and best areas for potholes – Cornwall tops the list with 210,311

The worst areas for potholes in the UK in terms of numbers reported to local authorities were as follows:

The fewest pothole roads in the UK, based on the number of roads reported over the past three years, were: 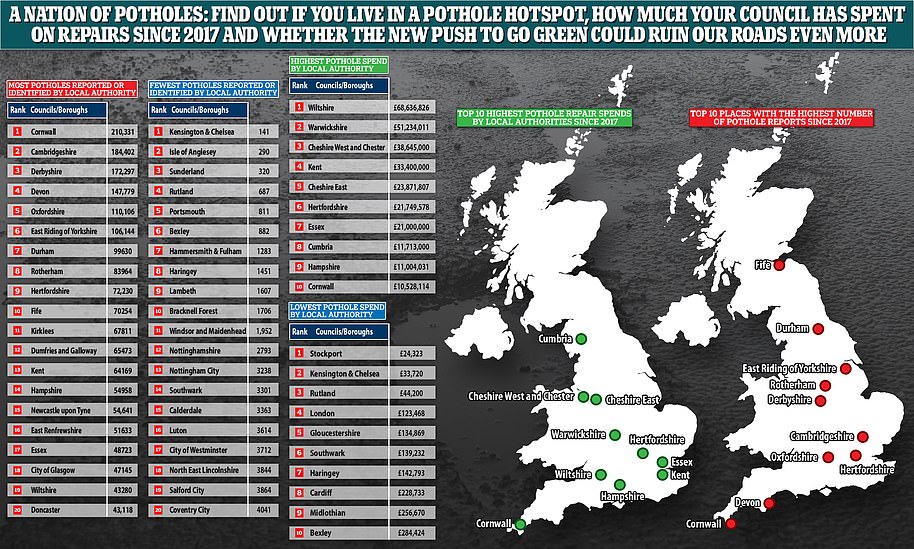 Cornwall was named the UK’s Pothole Capital in three years with 210,000 potholes reported in the UK. However, Lancashire has made a claim to the UK’s worst crater

He said, “Potholes are a nuisance to motorists across the country and we have worked closely with JCB to find a solution to a national problem.

“At a time when every penny and pound counts for local authorities, we are excited to be at the forefront of developing and testing new technologies and ways of working, especially those that can save residents.”

The vehicle’s release follows a vow made last November by Chancellor Rishi Sunak to invest £ 1.6 billion in repairing potholes in the UK and improving uneven roads.

Experts have warned that the cost of repairing any pothole on our roads will be far higher.

Commenting on the Chancellor’s fall 2020 spending review, the Asphalt Industry Alliance said it would take an additional £ 15 billion over the next decade to repair all of the potholes on local roads alone. 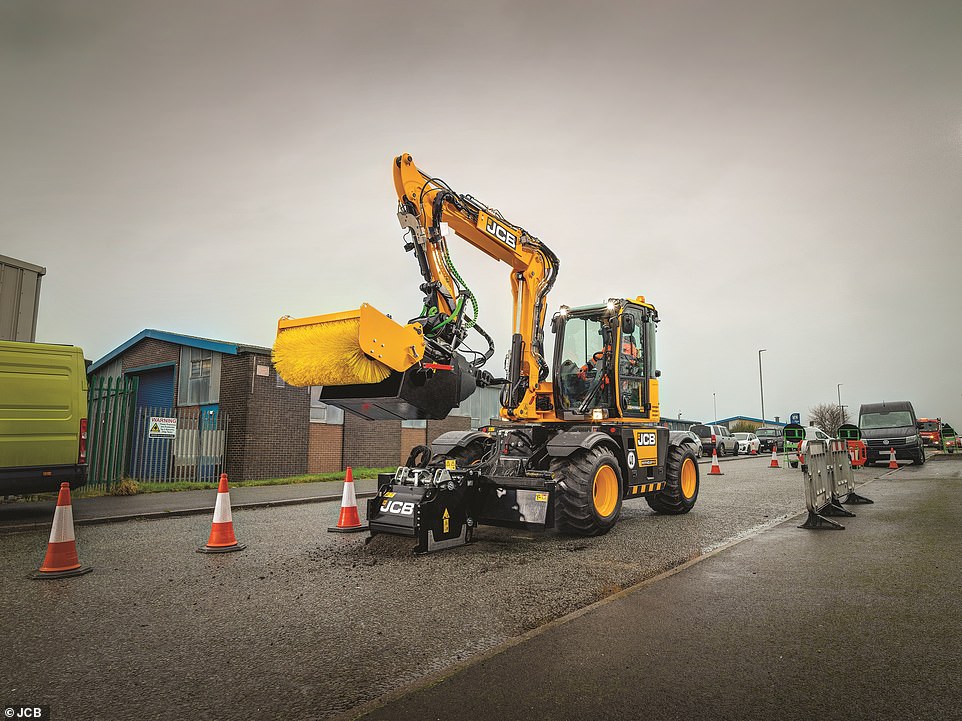 In initial trials in Stoke-on-Trent, the machine performed 51 road repair jobs in 20 days that normally would have taken a team of up to six people 63 days to complete 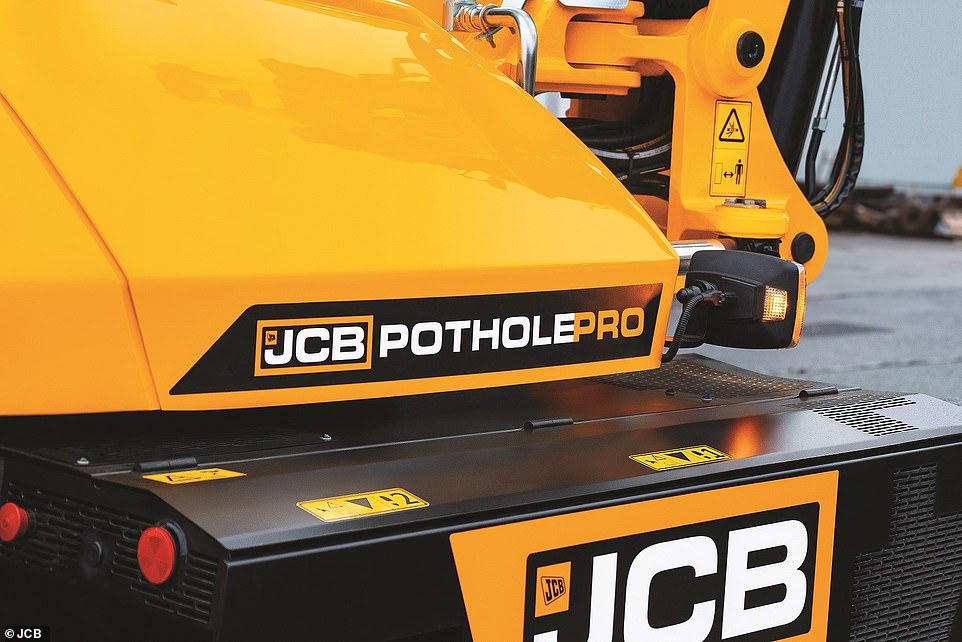 The vehicle’s release follows a vow made last November by Chancellor Rishi Sunak to invest £ 1.6 billion in repairing potholes in the UK and improving uneven roads 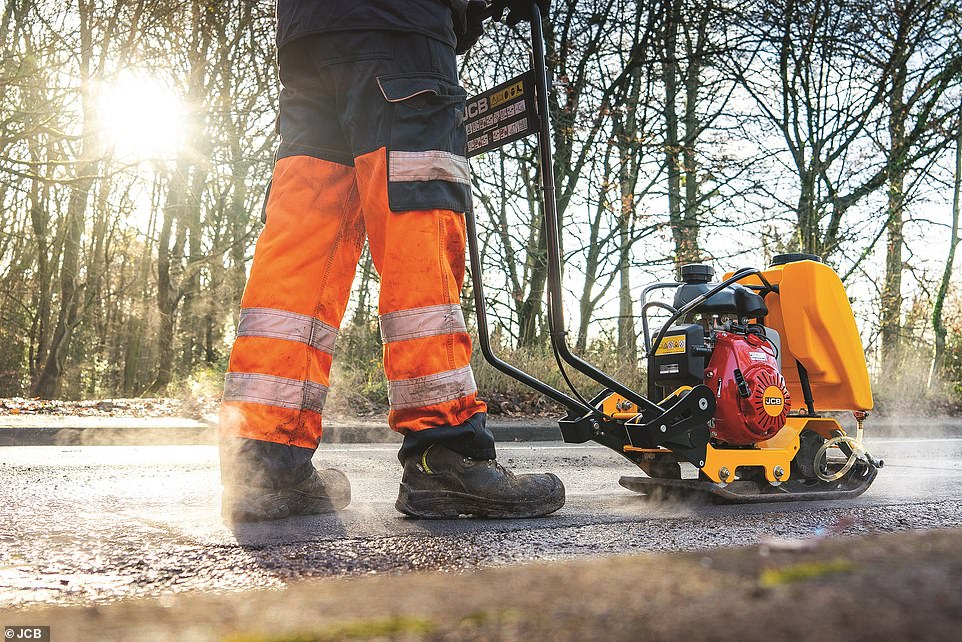 The councils are inundated with pothole complaints every 46 seconds, and over the past year more than £ 8.1 million was paid out in compensation to drivers for vehicle damage caused by the craters on the road

Rick Green, Chairman of the AIA, said, “While these spending commitments are welcome in these challenging times, we recognize that the amounts stated will not be enough to fill the billions in road maintenance backlog that we have in our aging process compensate network will continue to decline.

“Going forward, it will take an additional £ 1.5 billion a year investment for 10 years to improve the experience of all road users, support recovery and give the economy the much-needed boost.”

It has been estimated that councils receive a pothole repair request every 46 seconds, and over the past year, drivers have been paid more than £ 8.1 million in compensation for vehicle damage caused by potholes.

AA President Edmund King OBE said, “The number of pothole damage to cars is already staggering. However, as more people start cycling and e-scooters are legalized due to the avoidance of public transportation in the pandemic, sorting out our poor road surfaces becomes more important than ever.

“JCB has taken the initiative to address these issues and we’re excited to see the new PotholePro hit the streets.”

UK drivers are even more affected by pothole threats in 2020, despite the fact that traffic has fallen sharply due to Covid

BY JACK WRIGHT FOR MAILONLINE

More and more British motorists have been complaining of potholes damaging their cars in 2020 as poorly maintained roads continue to cause driver misery, according to recent research.

A large study by the RAC released in December found that 38 percent of drivers identified the dire condition of council-maintained roads as their greatest concern, up from 33 percent the previous year.

Around 52 percent of the 3,068 drivers surveyed said that the road conditions were worse than 12 months ago. Separate data shows that between July and September of this year, almost 1,900 calls were made for damaged shock absorbers, broken suspension springs or distorted wheels.

This is despite a huge drop in the number of vehicles driving on UK roads during the coronavirus pandemic, with traffic at one point dropping to just 23 percent of pre-lockdown levels.

The auto company said it was likely that the councils “were unable to maintain maintenance programs when the pandemic broke out, possibly due to staffing issues”.

The RAC requested that an additional 2 pence per liter of fuel should be fenced off for local road repairs. This would raise £ 4.7 billion over five years on top of the £ 2.5 billion already pledged for road repairs in England.

Eleven of the best NEW places to stay in England in 2021, from Cornwall to London to Cheshire